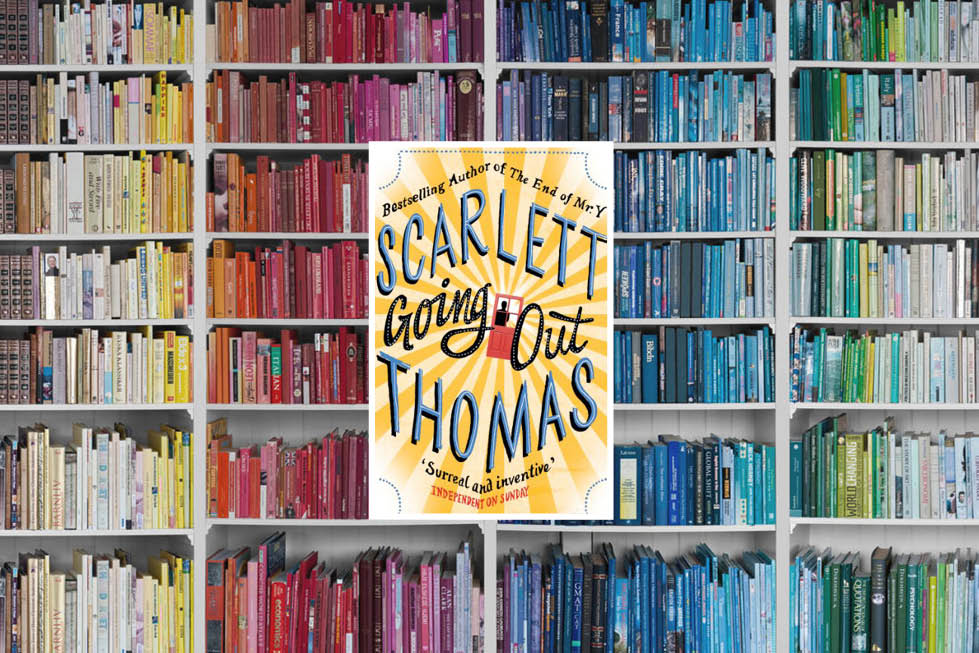 I’ve been a fan of Scarlett Thomas since I first read The End of Mr Y, so was rather excited when I came across a new book of hers whilst seeking out a new read. Alas, once I was sitting comfortably in Planet Elldrew and peeled back the cover my excitement faded to disappointment as I realised it was a new edition of an old book I had read back in 2002 when first published. Fortunately I couldn’t quite recall the detail of the story so figured that now the spine was bent I ought to persevere.

Even 2nd time round, Going Out was a thoroughly enjoyable read even if not quite up to the standard of Scarlett’s later works. It’s a loose retelling of The Wizard of Oz but so different that this is only gleaned from occasional and subtle hints. Going Out’s Dorothy is Luke a 20- something suffering from XP – an allergy to the sun which, contrary to the original Oz, results in him being unable to leave home rather than trying to get home. The book revolves around him and his friends (a thinly veiled reference to the Scarecrow, Tin Man and Lion) on a journey to find the healer who may cure him (could that be the Wizard?). The Oz allegories continue with scared-of-everything Julie (the Lion perhaps) and a road trip on which they can only travel on B-roads (the yellow roads…get it…hah!).

Beyond the Oz comparison, it’s actually a pretty easy and fun read. Going Out is mostly set in Essex, but an Essex prior to TOWIE* so one which embraces shopping malls, concrete industrial parks, mass produced identikit houses and chain pizza places rather than fake tans, Hollywood teeth, and towering stilettos. Scarlett does a wonderful job of describing this dreary pre-fabricated life and contrasting it to the glittering emerald trees and sparkling sapphire lakes that Luke encounters when he finally goes outside. The irony that this technicolored outside is nothing more that the parking lot of a Travelodge in Wales isn’t lost on the reader, but for a boy who’s entire universe has been the inside of a Barratt Home I guess it would seem rather brilliant. What ensues their arrival at the Travelodge is a rather amusing scene following poor Luke as he struggles with his first journey in a lift and the bland uniformity of every hotel corridor:

“The lift stops and the doors open. Julie steps out. Luke means to follow her but somehow his legs don’t work. By the time she looks around, presumably to see where he is, the doors are closing again…He tries pressing ‘1’, but when the lift stops and the doors open, it looks exactly like the place he last saw Julie standing but she isn’t there. Luke tries some other numbers randomly, hoping that one of them is going to be the lucky-prize door and Julie’s going to be there behind it. But each number seems to take him to the same place and Julie is never there. The next time the lift stops, at the same floor again, he stumbles out. There’s a sign saying ‘Stairs’…a couple of flights of stairs later there’s a sign saying ‘Lifts’. Julie was standing by the lifts, so Luke follows the arrow, and there are the lifts he’s just come from. How can that be?”

So, would Elldrew recommend Going Out? Well, it’s not a great book; it’s not up there in our all-time best ever books but, then again, it’s not at the bottom of the pile with the “can’t-believe-I-spent-money-on-this-trash” either. Going Out kind of sits somewhere in the middle…it’s the type of book one would pick up to read on a beach; easy, frothy, a really interesting concept and well written but I would put it down to cool off in the sea and I may not rush to pick it up instantly if the waiter passed with a cooling jug of sangria.

Next up in Planet Elldrew’s book reviews…we shall be continuing the medical theme with Before I Go To Sleep…49 pages in and we are already a tad hooked.

*TOWIE, for those who don’t know, is a reality television show based in Essex, England. Full title being “The Only Way Is Essex’, it shows, supposedly ‘real people in modified situations, saying unscripted lines but in a structured way’. Think Kardashians, Jersey Shore…you get the picture.