A Trio of Books Reviewed for Summer 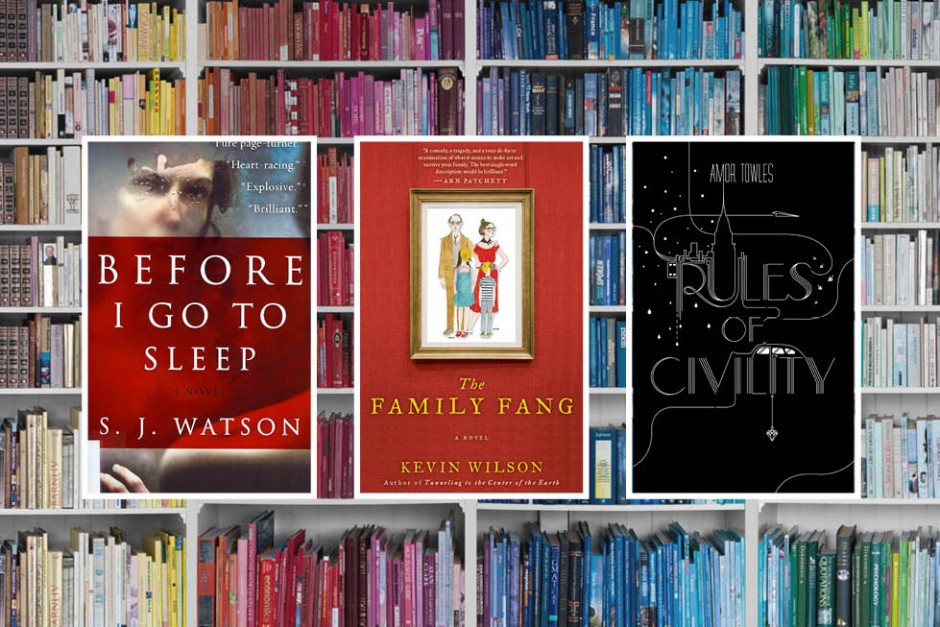 With one thing and another Planet Elldrew have had a busy few weeks so have not really had time to comment and critique the selection of books we have devoured during the smidgens of downtime we’ve managed to sneak in. Taking the opportunity to correct that, here’s Elldrew’s reviews of some great (and not so great) summer reads…hopefully getting this out there so you have time to pick up one or two of our recommendations at the departure lounge. The 3 books in question: Before I Go To Sleep by S J Watson; The Family Fang by Kevin Wilson and Rules of Civility by Amor Towles.

First up; Before I Go To Sleep by S J Watson. An interesting premise and for a fair chunk of the book I was really intrigued by this concept – imagine waking up not knowing who you are, where you are, how old you are, and that the man lying next to you is your husband! Well that’s what happens to Christine every morning…and every morning her patient husband has to sit her down and explain everything from scratch. Although it’s not a new idea and there are a fair few films that explore this, the book sets itself apart by making Christine the protagonist and presenting the book from her point of view. It has a great start and one can’t help but be drawn into the psychological exploration of Christine’s suburban-but-not-so-ordinary life, that is until the book becomes a somewhat less plausible mystery/thriller. This might have worked well if this sudden revelation hit the reader unexpectedly but, from the first time you pick up the book you know all is not as it seems as the back cover notes announce that “…the one person you trust may only be telling you half the story…” which meant that all through the early chapters the reader is questioning every character, every comment and every scene wondering what this deep mystery was and then, when it is all revealed, you’re a bit like ‘Oh, that’s it. I thought that from page one but was expecting something a bit cleverer’. It also doesn’t help that the final few chapters have lots of those convenient situations where ‘Character A’ just has to implausibly and spontaneously do something (like have a long shower) just so that ‘Character B’ has time to finish that really important plot point. I felt a little like the author put most of the dedication and effort into setting the scene and hooking you into the book, only to rush through the ending when she realised it really wasn’t that good, thinking best to get it over and done with quickly. So, thumbs up or thumbs down? Definitely a beach read and a pretty good beach read at that. But just don’t expect greatness. Oh, we also hear on the grapevine that this book is about to get a whole lot more publicity with Nicole Kidman having been signed to play Christine in the film adaptation!

Next on the list is The Family Fang by Kevin Wilson. I liked this book, I’m not sure why I liked it, but I did. It was a little eccentric, a little wacky, a little fun – a lot like Danny Boyle’s interpretation of the meandering English countryside in Friday’s London 2012 Olympic opening. Except the book isn’t set in England, it’s set in Tennessee, and flashes back and forth in the lives of notorious performance artists Caleb and Camille Fang and their children “Child A” and “Child B”. Oh, and the “children” are mostly grown-up for most of the book but return home following a series of unfortunate events (including Child B being shot in the face by a grown-up gas powered spud gun) where they become involuntary participants in Caleb and Camille’s swansong. In its quirky and humorous way the book explores this psychologically damaged four-some and the variety of bizarre situations they end up in – some in the name of art and others just by bad luck. It’s a little difficult to capture the atmosphere of the book in a paragraph or two here but suffice to say I’d definitely recommend it. The Family Fang won’t be everyone’s cup of tea but I’d say give it a go and give it a bit of time and see what you think. As a footnote, in a bizarre twist of coincidence it seems that Nicole Kidman has also just signed up for this film (honestly, I did not know that when I bought either of these 2 books). Maybe we should find out what else she has planned on her acting schedule and read those books!

Changing genre entirely, we then picked up Rules of Civility by Amor Towles. A dark comedy and subtle romance with a hint of tragedy and mystery. This is probably my favourite of our recent reads. Just passing the paperback in the bookshop, you can’t help but notice that the midnight blue cover with the merest outline of the New York skyline in pale grey exudes sophistication and glamour, and suggests a book which will draw you into a world of style over substance. Set in the late 1930’s, Rules of Civility tells the tale of Katie Kontent (pronounced like the state of wellbeing, not the list of chapters in a book) and her friends Evie Ross and Tinker Grey, supported by a cast with equally decadent sounding names; Peaches, Mitsy, Dicky Vanderwhile, Anne Grandyn. Reminiscent of Carrie Bradshaw and Holly Golightly, the ‘gang’ swan around 1930’s Manhattan leading a decadent, frivolous and largely unaffordable (even to them) life…one can’t help but think any minute now they’ll be motoring down to West Egg for one of Jay Gatsby’s parties. As someone who counts Breakfast at Tiffany’s amongst their favourite films, and The Great Gatsby as a Top Ten book, Rules of Civility hits all the right spots and it may just be possible that Planet Elldrew’s new décor nods it hat at this book and Tinker’s Manhattan penthouse. Rules of Civility is effortlessly cool and in a non-arrogant way it knows it – on ‘Amazon’ it even has its own jazz playlist to listen to while you read. Definitely read this one and read it now before Ms. Kidman also signs up to this movie!

An Ever Changing View