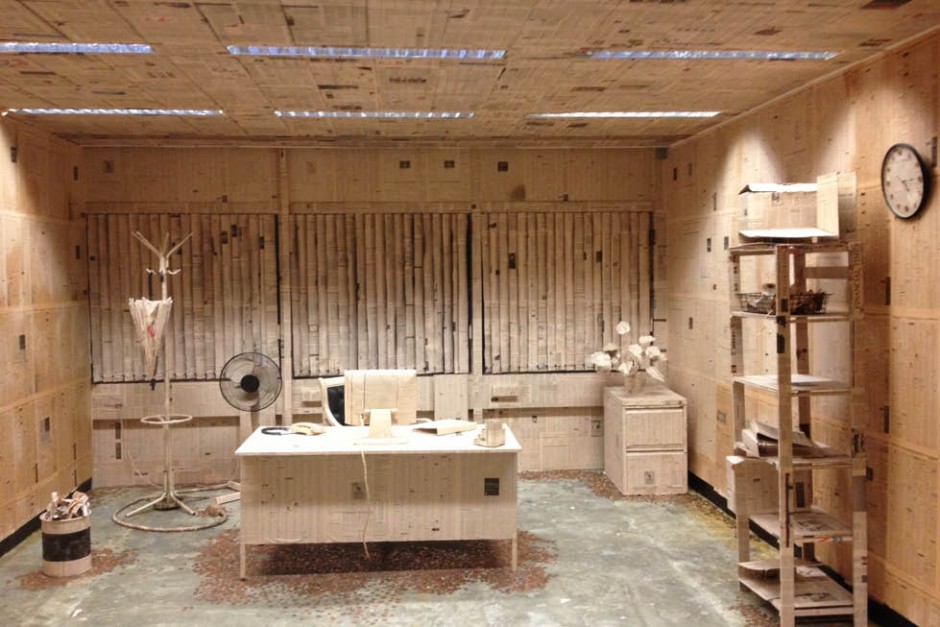 Last weekend Planet Elldrew headed down to deepest darkest Croydon (we’re North London boys) for our first experience of Secret Cinema, and what an experience it was…we’re still processing a very surreal night, still rather unsure what it was all about, except to say that we loved it!

The build-up started several months ago when we first purchased our tickets. At the same time we were invited to sign-up as employees of a mysterious organisation – G.O.O.D. – with little revealed except that we had to network with our colleagues and, through successful socialising, we would be assigned job’s and security clearance for the night. As the night approached, propaganda from G.O.O.D. came frequently and our anticipation reached climax when Ell was assigned a role on the ‘Committee for Credit Creation’ (Drew having a lesser role within the Waverley Department). Following instructions we printed our new business cards, put together appropriate outfits (think 1940’s corporate dress), assembled the required equipment for the job (a penny, a list of 5 dreams, a solution to the Credit Crisis etc) and headed to South London for our induction.

To provide a little Dutch courage, given we had separate roles and separate entrances, Elldrew may have stopped for a small drink or two en route and it is quite possible that this may have been the reason that, even before entering corporate headquarters, Ell had been fined by G.O.O.D. for “pretending to be left handed”. On entering, Ell was ushered into a private lift, up to the finance department, where Mr Spencer-Brook Clark greeted him, introducing the fellow Committee members to then be ushered into the Committee Room (a stylishly wallpapered room in old copies of the Financial Times). A brief debate on solving the Credit Crisis ensued during which Ell’s suggestion of “encouraging creative neckwear” was voted the optimal solution. After a moment of quiet reflection the Committee was sent off to market the idea.

Drew was assigned to Ms Loop on the 12th floor. He couldn’t quite explain what his induction was about, it possibly went over his head, but Ms Loop was described as a character from one of the Harry Potter movies. He was lead into a room with his fellow colleagues, all having to pick a test tube suspended from a wood frame, then choosing whether or not to keep/act on what was written inside, or even replace it with one of his or his friends dreams that he was requested to bring along. Drew found a random mobile number saying “CALL ME”, to which he replaced said paper back into tube and decided it was time to go in search of a trusted friend, Mr Vino. 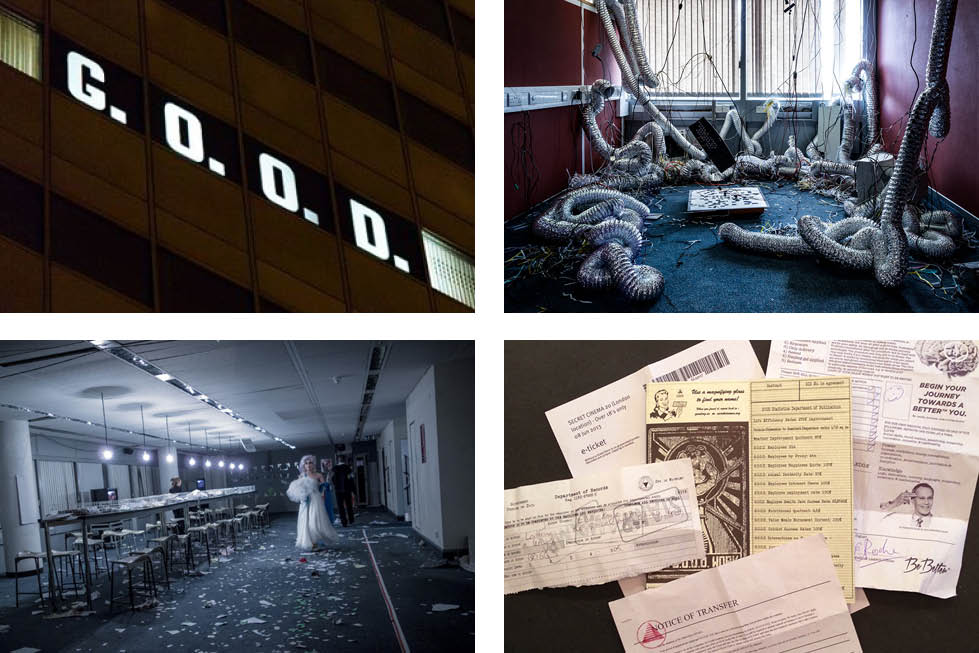 It’s around this point that the evening went from structured surrealism to full-blown living-an-Orwellian-nightmare. Nightmare’s not fair really as it was all in good fun and spirits (or at least accompanied by “good spirits” of the cold liquid variety) as we were given free rein to wander around 13-stories of artistically designed office building. In one room we stumbled across a sculptor carving babies heads under a spotlight, in the next we saw an exhibition of “lips of love”, round the corner was a manicurist and in the corridor was a funeral. Ell bumped into Drew in the lift lobby where we tried to meet our friends on the 13th floor Austin Powers-esque penthouse bar (well we had been secretly told about the VIP bar so were intrigued) but the lift attendant sent us to the basement which was full of generators, eerie back-lit fans, and the innards of a 1960’s Morris Minor. We tried to take the stairs back-up but they were blocked. We tried the lift but it broke. We tried to fuse the power to the building but failed. We tried the lift again and succeeded, but this time ending on the ground floor which gave us enough time to catch our breath, whilst watching an interactive song and dance performance of ‘Total Eclipse of the Heart’ – absolutely mesmerising.

We headed back to the 13th floor where a nattily dressed lift attendant accepted our request but then refused lift entrance to anyone else because she had a weak bladder and an urgent toilet need. She took us to the 13th floor but, once again, it wasn’t the 13th floor and suddenly we were adrift and alone amongst bank after bank of computer’s flashing green screens. Fortunately a talking vending machine offered us further liquid refreshments and pointed us to the ‘Hall of Records’ where Ell had to register his fine (remember that left-handed incident earlier in the evening). A charming Mr Kurtzmann greeted us, interviewed Ell about his crime before denying all knowledge of his role and sending us on our way. We tottered off, ending up at Dr Leon’s Clinic where Ell was strapped to a chair and fitted with a “Better Chip” (which the nurse assured would give a Genghis Khan sense of self-power). Eventually, we bumped into our friends in the middle of a maze of newspapers but alas, amongst the maze, we lost each other (possibly when 2 of us were distracted by a tropically heated water bed). The other two ended up in an office where we made ourselves at home before a group of passers-by stopped in – possibly because they seemed to think we were part of the installation or possibly because Ell’s “Better Chip” got the better of his self-control – we interrogated them as to the difference between pinstripes and chalk stripes and sent them on their merry way.

It was around this time we realised the film had started, but without any large screen showing it it was easy to miss, as it was dotted about here and there on small tv screens on every floor. We decided we were having too much fun to watch, or in fact try and follow the film, so we continued our exploration of the building. As the sun set, and the lights lowered, this point of the evening starts to get a little hazy. We found ourselves part of a rather lovely wedding, following the bride and groom to the building’s windows were we saw the climax of the movie projected to the side of the buildings glass atrium, with actors swooping in from the ceiling and other actors falling down dead on the floor around us.

And, then, the night was over…we emerged back onto the streets of Croydon, back into the reality of the ordinary life we had escaped for 4 hours and back to an hour’s journey home.

Would we do it again; yes, we think so. We had a thoroughly fun evening and look forward to Secret Cinema’s next event. But we would hope that the next event possibly focused more on the ‘cinema’ and on the movie. This was great and weird but it wasn’t really a cinematic experience and isn’t that what something called ‘Secret Cinema‘ should really be about? Separate Secret Cinema and G.O.O.D. and you have two fantastic event concepts. Just let us choose which one we want to be part of – knowing the movie upfront would have allowed the evening to make more sense…we heard grumbling from people who had not heard of the movie (which was “Brazil”, the 1985 British science fiction fantasy film directed by Terry Gilliam) who just could not work out what was going on, nor could they follow the movie on the tv screens because there was too much going on around them (sort of happens when hundreds of people converge in one surreal location). We were glad to have found out the name of the movie and watch the trailer in advance. We wonder what the next instalment will be?

Due to blurred vision on the night, lead headline image has been taken from the following flickr page