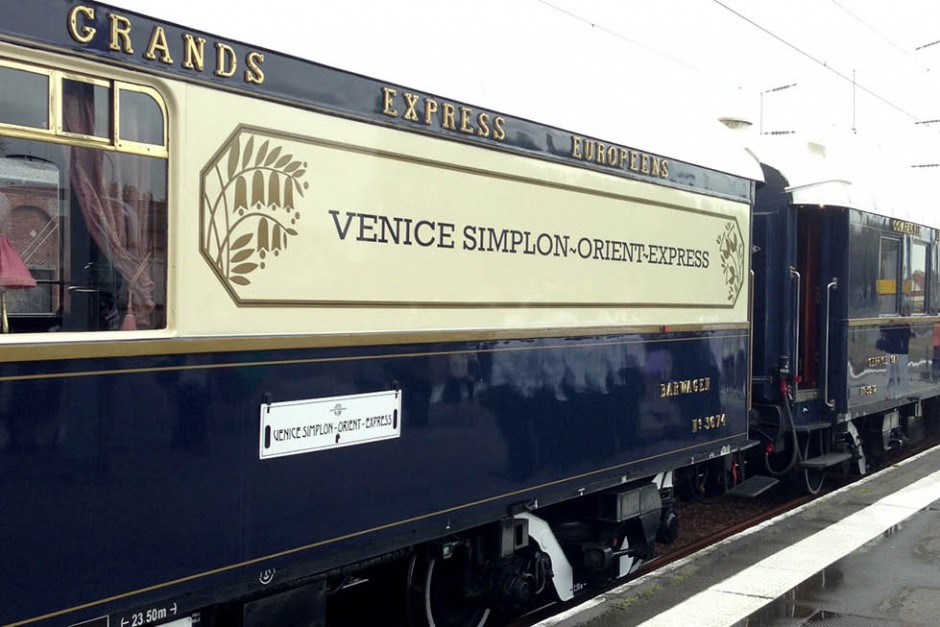 So if you have managed to get through Part 1 of this amazing journey you will have realised that Elldrew were now in France, standing on the platform at Calais ready to board the famous VSOE.

Heading in the direction of our carriage, we were amazed how long the train actually was (we believe it runs around 15+ carriages every journey) and when we found our carriage we were welcomed aboard by Pietro, our personal steward for the journey, who not only showed us to our cabin, but quickly reappeared with a glass of bubbles each, to help us settle in. Our checked-in luggage from London was waiting for us in the overhead racks, and whilst the cabin is compact, the seating was plush, the wood was shining and we immediately started to explore our home for the next 24-hours; within minutes the engines had started up and our journey had began.

Pietro came by, not to disturb, but to show us the layout of the cabin; one should note that despite it being only a small cabin there is an abundance of switches etc, so Pietro’s help was much appreciated to ensure we didn’t erroneously set off an alarm, fuse the train or call for assistance when all we required was the fan. He pointed out the washing area (nattily concealed behind two wooden doors), how to open the windows and advised how he’ll transform the room into a sleeping cabin whilst we are enjoying our dinner. Our companions were in the cabin next to us so once they were equally briefed Pietro opened the connecting door making the cabin feel cozier. We chatted, watching the French countryside glide by, sipping on our bubbles.

We were just nestling into the banquette sofa when another knock at the door signalled the maitre d’ to take our restaurant reservations. By restaurant we mean one of the three dining cars we wanted to eat in for dinner, and lunch the following day. For dinner there was a choice of a 19.00 or 20.00 seating and given it was already 18.00 and we were a) not hungry from brunch and b) needed ample time to dress, we logically went for the late sitting. Pre-warned of the cost of drinks on the train we had cunningly come prepared with a few small mini-bar sized personal bottles of bubbles to ensure we stayed hydrated. 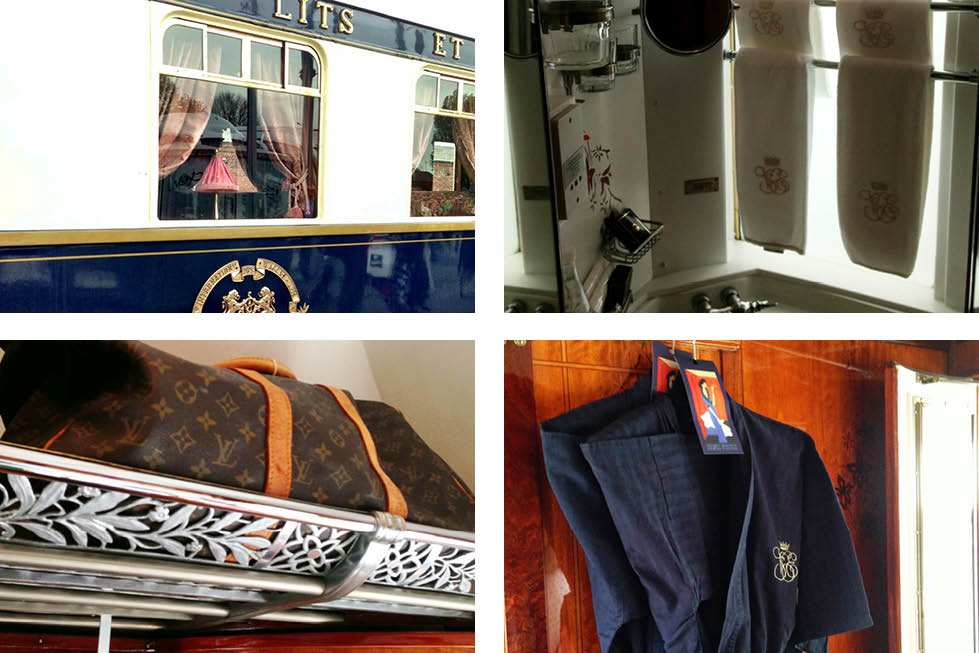 Popping open a mini Champagne we began to contemplate what seemed a rather complicated process for “dressing for dinner”. You might ask, why “complicated”, but imagine for a minute a rather small space of empty floor (something not a whole lot larger than an airplane toilet) and then put into that space two fully grown men; four suits (2 on the grown men and 2 tuxedos awaiting them), two bow ties (self-tying, of course), 4 pairs of shoes (2 currently worn), 2 shirts, 8 shirt studs, 4 collar studs, 4 cufflinks…you probably get the idea, but don’t stop there! Now, put all of that on a moving and not-moving-especially-smoothly train as it weaved across French country tracks, and you have a better idea. With hindsight it probably would have made sense to dress separately, but foresight is not something Elldrew are particularly good at and by now the clock was ticking anyway. There may have been an occasional raised voice and a few losses of balance but soon enough we were presentable enough to leave the cabin and really get our first good glimpse of the inside of the rest of the train.

Our little gang made our way through the carriages towards the Bar Car. We’d heard rumours that the Bar Car got rather busy before dinner service (another reason to choose the late sitting) but fortunately for us it was calm and tranquil, giving us a good opportunity to admire the decor and marvel at the grand piano…yes, a train with a grand piano in it…whoop! We decided to indulge in an “Agatha Christie” as a pre-dinner cocktail – well, when in Rome, and, after all, having read “Murder on the Orient Express” in the cabin it made sense. Specially created by the VSOE’s head barman, Walter, the cocktail represented both the train and novel as it had 12 ingredients (12 characters) and was topped off with Champagne (representing the 13th character) – very chic. Even chicer was watching our fellow passengers make their way for a drink, or through the Bar to the Dining Cars, dressed in all their finery. So rare to see such old world glamour and even rarer to see it on a train, but then this was the Venice Simplon-Orient-Express.

Cocktails consumed, we made our way through to dinner, treading carefully so as to not accidentally fall onto any of our fellow diners and, as the train hurtled towards Paris, we sat down for our first dining experience. Quite different to National Rail’s buffet cars, the VSOE has three Dining Cars with every table laden with linen, crystal and silver, each with a different marquetry theme. Nothing is bolted down apart from the table. A gastronomic menu of ‘Thermidor’ style lobster in a light sauce with a pasta shell filled with rocket fondue, roast fillet of Charolais beef with a “Yellow wine” and morel sauce, spring vegetables and tarragon flavoured backed potato were too easily consumed. These two courses were followed with a choice of finely selected cheese and macaroons with rose pralines and coffee panna cotta. Not sure if it was the combination of food and alcohol, or us getting used to the movement or the French rail tracks smoothing out, but aside from the gentle-ish rocking you wouldn’t know you were on a train, except for the occasional cry of “hold the lamps” to prevent them crashing onto the plates when the train braked too sharply (Elldrew still can’t understand why the train needed to occasionally brake, we can’t imagine it was breaking the speed limit?!). 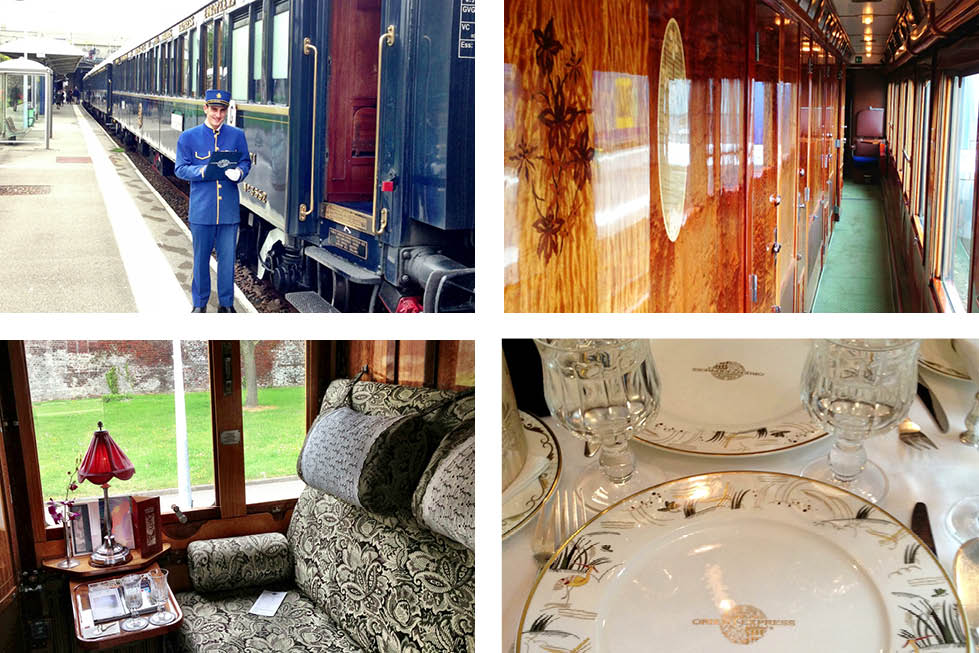 As we finished dinner the train pulled into Paris’ Gare de L’Est to welcome new guests, and bid old ones farewell. Elldrew were able to briefly hop off the train for a much needed, albeit illegal, cigarette on the platform. It would seem that Parisians turn a blind eye to chic VSOE passengers occasionally having a crafty cigarette right next to the train, but that’s probably not surprising for the capital of Style.

Hopping back onboard we agreed it would be rude not to have a nightcap in the now much busier Bar Car (having filled up with post-dinner guests and pre-dinner guests who had joined the train from Paris (they got the 21.30 sitting)), Elldrew & Co seized some stools at the bar, cocktails were again ordered and drunk before a second round had magically appeared. Elldrew don’t generally like to fictionalise in their blog but it’s probably fair to say that it was around the 3rd ‘Old Fashioned’ that things got a little hazy – we may or may not have acquired a steward’s hat (for a photo), we may or may not have had a “lit cigarette flying back from window into mostly wooden train” incident, and we may or may not have been the last people in the bar (aside from the pianist and barman). What we do know is that when we returned to the Bar Car the following day the pianist burst into a rendition of “I Will Survive”, which would suggest that, at the very least, we had left our mark on him, and perhaps the old lady herself.

We do also know that we did eventually make it back to our cabins, which had by then been converted into two bunk beds for the evening, and surprisingly, we had well and truly grown accustom to the motion of the train as we let it lull us into a gentle sleep.

This would seem a suitable place to pause our narrative and share a few useful night cabin tidbits that we hadn’t read anywhere else: