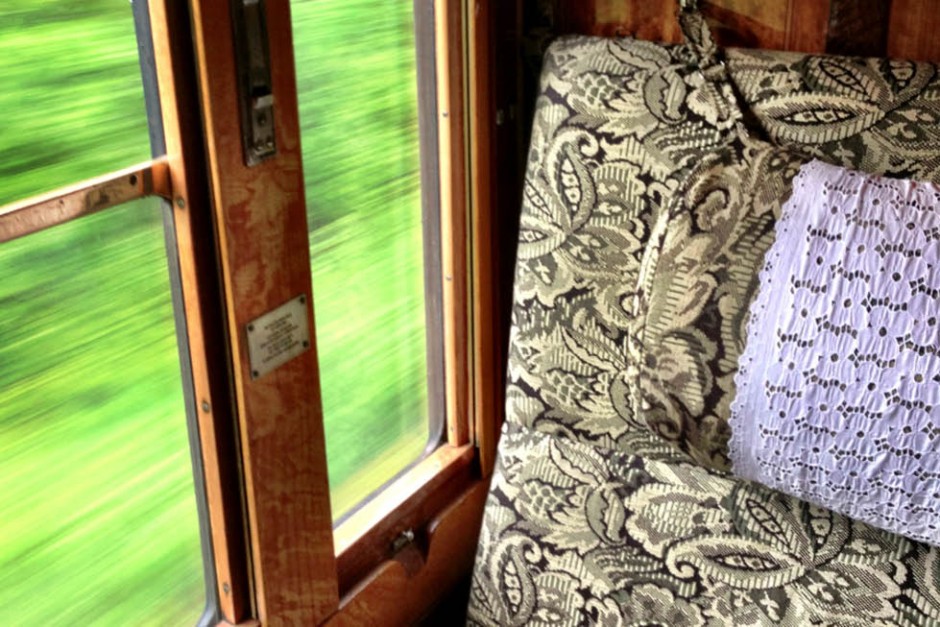 So we left you in Part 2, after a rather decadent dinner and a few too many nightcaps in the Bar Car (by this time we had well and truly departed Paris and were making our way to Venice).

Elldrew woke up somewhere near the Swiss/Austrian border. Feeling slightly jaded we yearn for a refreshing shower but in the Golden Age of Travel one didn’t shower every day and so we have to make-do with just a wash. Orient-Express have considered this and provided a washbasin stacked with fluffy towels, an amenities kit that even includes a dry shower gel.

Feeling slightly refreshed we buzz Pietro to convert the beds back to the day cabin and serve breakfast, coffee cravings becoming very overwhelming. So indulgent this private steward thing! The downside is standing in the corridor of the most glamorous train in the world looking decidedly unglamorous in our ‘his and his’ Orient-Express dressing gowns and slippers, with morning hair to suit. Thank goodness everyone else is doing the same. Cabin converted and a hearty continental breakfast is served. Future travellers may wish to consider a kiwi fruit allergy (genuine in Ell’s case) as his tropical fruit platter far surpassed Drew’s cocktail glass of pineapple, grapefruit and kiwi chunks.

No rush to eat breakfast and no rush to dress considering we are going to be on the train all day, we stared blankly out the window as the Austrian Alps painted the most beautiful picture before our very eyes. What a view to wake up to; fuzzy heads soon forgotten. We were heading towards Innsbruck, being the longest and last stop prior to Venice, which would provide an opportunity for a little fresh air, a much needed nicotine kick and the opportunity to show off our Day Two outfits! We were professionals now, having learnt our lesson the previous day, so we took it in turns to dress before bouncing down to the platform at Innsbruck – hello Austria. Then we realised we weren’t that professional as we found, like many other passengers, it took us a while to find our “land legs” after 24hrs on the train. We weren’t at Innsbruck nearly long enough to see any of the sights we (like most of our travelling companions) spent the 30-min break in a variety of camera poses in front of, next to, climbing in and leaning out of the train, all the while smiling regally at the commuters on the opposite platform who were looking enviously across at us. 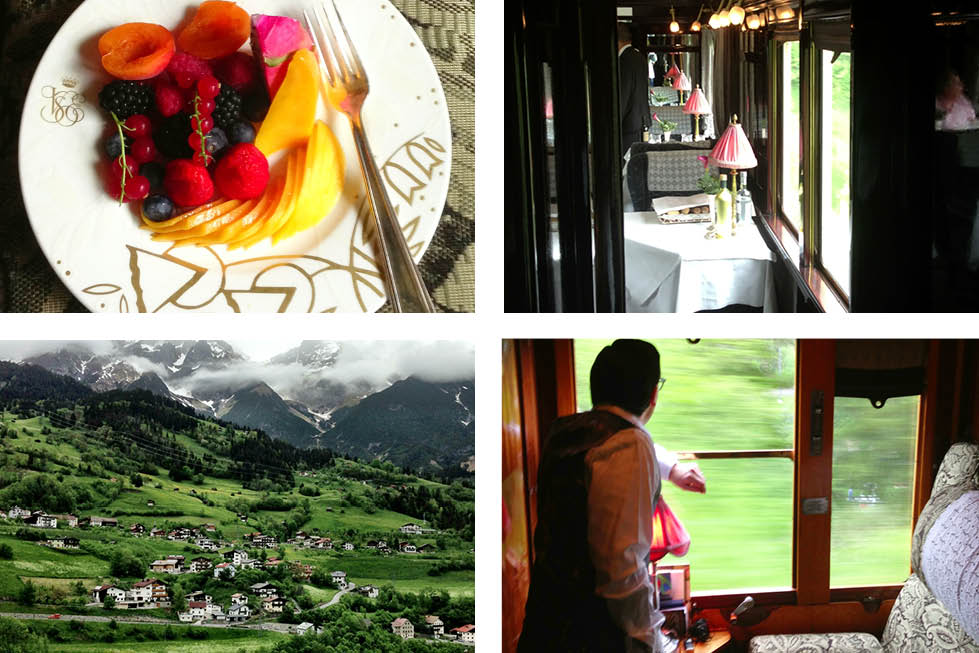 We had reserved the 14.00 late lunch sitting (Elldrew are not ones to rush) so once back on board there was ample time to laze around the cabin, continue to admire the stunning scenery, catch another 40 winks or pop into the onboard boutique for some light shopping, before making our way back to the Bar Car for a pre-lunch Bloody Mary. As we settled down into our armchair, aperitif in hand, piano man tinkling the ivories, the train pulled into the Brenner Pass – the carriage instantly taking us back to the prior evening – before emerging to showcase the spectacular journey through the Italian Dolomites. Alas for Elldrew, the weather had taken a turn for the worse so the view was maybe not as stunning or photographable as on a beautiful sunny day, but the low cloud and small waterfalls caused by the heavy rain added an air of mystery and made us appreciate being cosy and comfy in our luxury carriage.

Lunch itself was almost as decadent as dinner; risotto with saffron and rosette of scallops caramelised in sesame oil, guinea fowl fillet with foie gras stewed in agave syrup with a zucchini and tomato confit, sweet red onions stuffed with buttered mashed potato and a dessert of dark chocolate ganache flavoured with whisky and lightly salted butter toffee sauce. All of this left us wishing the train was going downhill so that we could roll back to our cabins!

By now none of us felt we could eat or drink another morsel and so it really was time to let all the food digest as we sat back in the cabin watching Northern Italy race past. After all the excitement of the past 24 hours it was nice to have a couple of hours to really relax and do nothing (except occasionally run from one side of the train to the other for a particularly spectacular photo). And before we knew it Pietro was back to take command of our luggage (it would be uncouth to carry it off the train oneself) and to offer afternoon tea in our cabin, which we politely declined for fear of bursting our trouser seams. 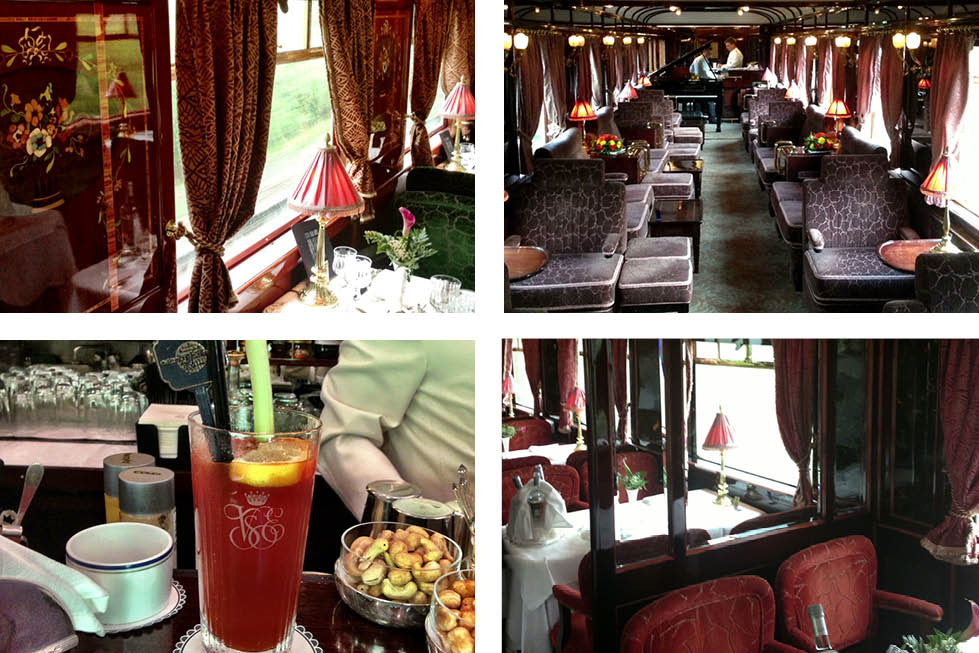 The big finale was crossing the long bridge over the sea into Venice itself. Everyone hurried to the windows for a first glimpse of this amazing city with its canals, islands and church turrets. But as breathtaking as this was, it was tinged with sadness that our journey itself was soon to end. Pulling into Santa Lucia station we took one final look at our cabin before stepping off the train, walking past the iconic blue carriages, the staff again lined up at the end of the train to nod us a fond goodbye as we head back into our real lives, to be left with just the memory of “a journey like no other”. Thankfully we were in Venice for two days, so this adventure had not ended just yet!

Would we recommend it? Most definitely. Does it cost a fortune? Yes it does. Is it worth it? The experience is if you can afford it.

Elldrew would like to thank Orient-Express for an amazing and special trip.