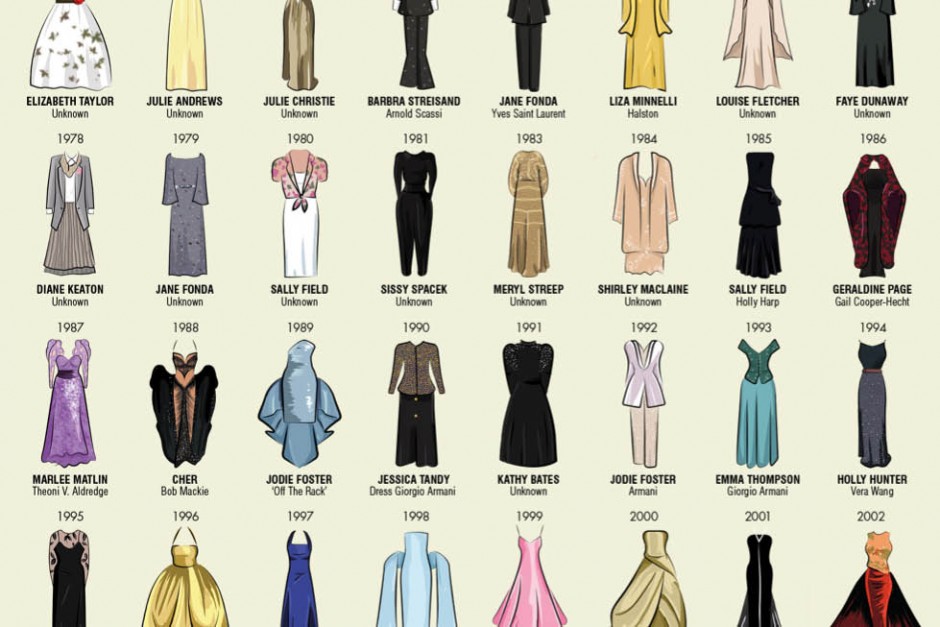 Here’s some Friday fashion fun to get everyone in the mood for this weekends Oscars! The infographic, produced by Media Run Digital and recently featured on stylist online, shows every best actress winners dress since 1929 (you can see the full graphic at the bottom of this post). What we love about the guys that produced this is their dedication to getting it right!

“Research for this required us to look up every award-winner and find several photos of them in the dress. Older photos, being in black and white presented an issue so we made every effort to find written references to the dresses so we could recreate them in colour. The other significant challenge was in finding the name of designer of each dress. We’ve done our best within the time we could spend on this but many are still marked as ‘unknown’, due to the scarcity of this information. If anyone who sees this can tell us which ones we’re missing, we’ll happily update and re-release the infographic at a later date.” – Media Run Digital

What has intrigued Elldrew though is:

“She was proud of the Oscars and felt a little sheepish about never showing up to accept them.” – A. Scott Berg, biographer and friend.

Two gowns (1937 & 1954) show the elegance of the times and lend weight to the statement that ‘classic style never goes out of fashion’. 1977 however was a bit of a fail (possibly modelled on a Benedictine monk?). In general the 70‘s were just yuck, and the 80’s were pretty bad too! The 90’s, and more recently, has seen a return to the elegant classic days – even if dresses have become bigger and more of a statement piece (again, a sign of the times)!

Being able to view all the dresses in one graphic really makes this piece so intriguing. It’s the type of thing that would look amazing in a ladies dressing room, adding tips and inspiring a new generation (or possibly offering a few warning lights on how to avoid a fashion faux pas).

In conclusion, if you want to see how close the drawings match the real thing, Google the 1987 dress, yes it’s as hideous as the drawing (actually it looks better in the drawing)!