We first came across Matera, in Puglia, southern Italy (near the boot heel) when we learnt of the Sextantio Le Grotte Della Civita hotel (a stunning cave hotel which we quickly added to our bucket list and just as quickly planned a visit to). I had mentioned to my Italian hairdresser (from Naples) that Elldrew were heading there for 4 days and all he asked was “Why?” I explained to him about the hotel and he seemed a little bemused, whilst having heard of the city he hadn’t realised that it had, in fact, reached international tourist status. After some rather extensive research prior to booking the hotel (we didn’t want to be stuck in a place that couldn’t keep us amused for days, especially when our travel dates were dictated by a very limited flight schedule), we actually began to look forward to exploring the delights of this ancient city.

Matera, a town in the region of Basilicata, is the oldest continuously-inhabited settlement in the world after Petra, thanks to its honeycomb of cave-houses dug into the rock cliffs, like caverns, which are connected by streets and pathways that weave around and over the rooftops of other houses/caves. The ancient town was built on the slope of a large ravine that, over time, has become a stream. However walking around (your calves get a great work out) one can still imagine what it would have been like to wake up every morning to such spectacular views. It’s historical centre is a meandering maze of cobbled lanes, stone stairways, medieval palaces and historic churches that are so untouched by the modern age that, walking amongst them, makes it easy to see why Hollywood have used this ancient site to recreate scenes for many movies (the most famous being ‘The Passion of the Christ’). 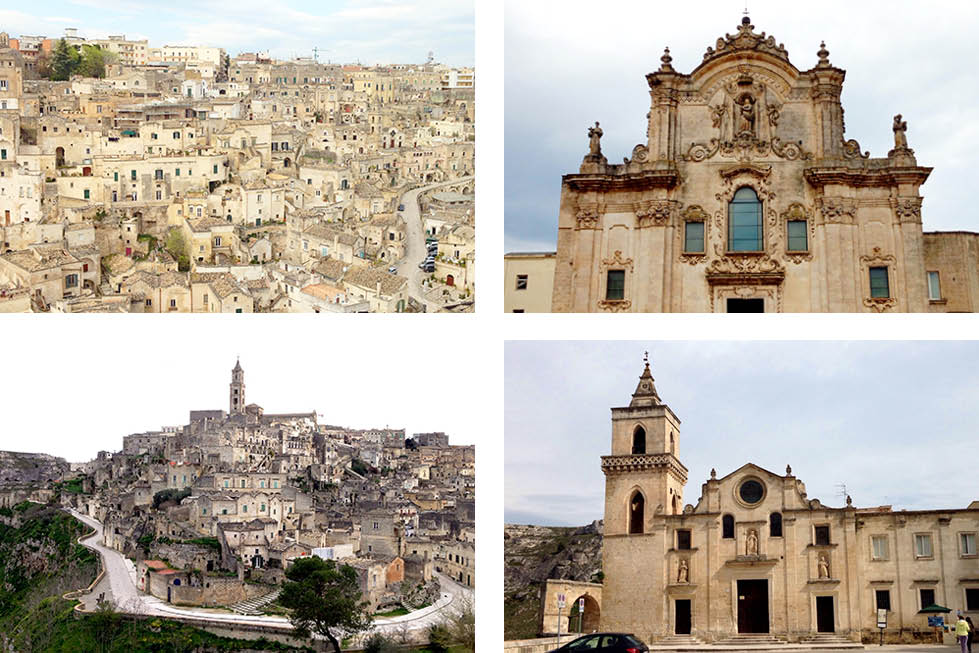 But the history of the “Sassi di Matera” (meaning “Stones of Matera”) dates back further than biblical times, all the way back to the Paleolithic age; when we mere mortals used the most primitive of tools made from stone, wood or bone – oh how far we have come! The Sassi is made up of ~1,500 cave dwellings, first occupied 10,000+ years ago, which have been gradually burrowed deeper into living spaces by one historic nation after another. The Romans, Normans, Lombardys, Benedictines, Byzantines, Orsinis and Bonaparte’s have all left their mark on the town and in 1927 Matera became the first Italian city to fight against German occupation. Sadly, by the 1950’s Matera had deteriorated into a slum with whole families living in one-room caves without heat or plumbing, sharing the space with donkeys, chickens and an assortment of other animals – visiting the Casa Grotta di Vico Solitario one can see what Matera was like then, and understand why it was known as “the shame of Italy” and forcibly emptied by the government.

It wasn’t until the late 80s that plans were drawn up to regenerate the area and bring the Sassi back to life. In 1993 the area was declared a UNESCO World Heritage site. Today many businesses that include hotels, bars, restaurants and even nightclubs now occupy the ancient caves and surrounding buildings, which are bringing back a touch of the old world glamour of Matera. There’s life in the old girl yet! 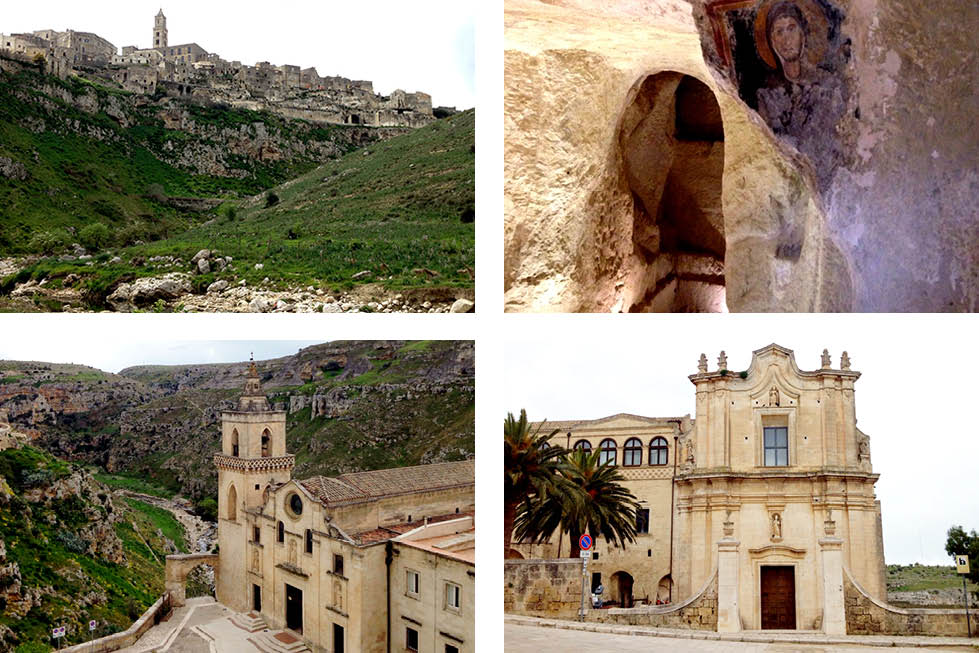 Whilst we visited for 4 days, the Sassi could really be explored in 2-3 days. We were very lucky to arrive on the weekend that the FAI (the Italian National Trust) were hosting ‘open days’ to private buildings, and through this were privileged to be granted access to the spectacular Palazzo Bernardini, an old palace and still a private residence inhabited by the noble family that built it. The Palazzo is almost 1,000 years old but, like so many historic buildings, has been rebuilt many times; most recently for a visit from King Joseph Bonaparte (Napoleon’s brother and King of Naples, Sicily and, later, Spain) in 1806 where a ball was hosted for the King and the ballroom retains both the decoration from that ball and the chair that was sat on by King Joseph.

Matera is a real treat of a break, lots to see and explore and not really like anywhere else in the world that we have experienced. In between getting lost in the maze of streets, Matera is also peppered with a great combination of restaurants specialising in traditional local cuisine – our top 3 were ‘Ristorante Francesca’, ‘Baccanti’ and ‘L’abbondanza Lucana’ and, should you go, you MUST also try the local delicacy ‘Peperone di Senise’; a sweet Italian red pepper that has been dried then fried until crunchy, sprinkled with salt. The final product is like a vegetable crisp and it is used to add flavor and colour to pastas (‘Orrechietti’ is the local pasta) or just sprinkled on top for additional crunch. They are only available in the local area so make sure you pick up a bag (or 3) before leaving or you will be disappointed, they are are delicious! we got a couple of bags but we are not sharing with anyone! 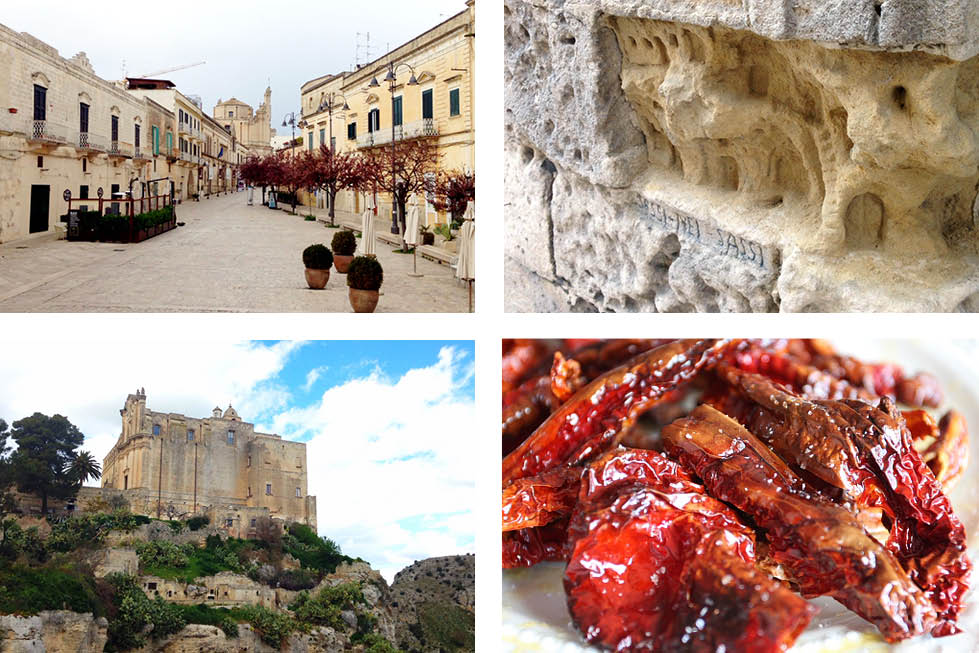 Whilst on the topic of food the local bread ‘Pane di Matera’ (which boringly, literally translates as the “bread of Matera”) has to be mentioned as it is considered by many to be the best in Italy. In honor of this it has been awarded Protected Designation of Origin (PDO) status (alongside its more famous brethren such as Balsamic Vinegar, Parmigiano-Reggiano, Melton Mowbray Pork Pies and, most famously, Champagne) and our expanded waistline testifies its gorgeousness (p.s. like the rest of Matera the bread is equally ancient with the recipe rumoured to stem back to the 15th century). We would however recommend you try the bread from an authentic bakery or good restaurant as we noticed that the baskets of bread slapped down in most “tourist restaurants” were a poor copy (or were stale as they had been making the rounds from table to table throughout the day – an assumption only on our part).

Finally, it’s Italy, and Elldrew, so we have to mention the wine. Maybe not well known outside the country but we found the local wine as good as any better-known region! In fact, the local red wine called ‘Agilianico’ is a prized specialty offering a beautiful, powerful, earthy richness, most of which never leaves Basilicata.

We read this Trip Advisor statement that is the perfect way to end this blog on the magic that is Matera… “Get to Matera quickly, because it’s still relatively undiscovered by foreign tourists.” Says it all really. Happy travels.