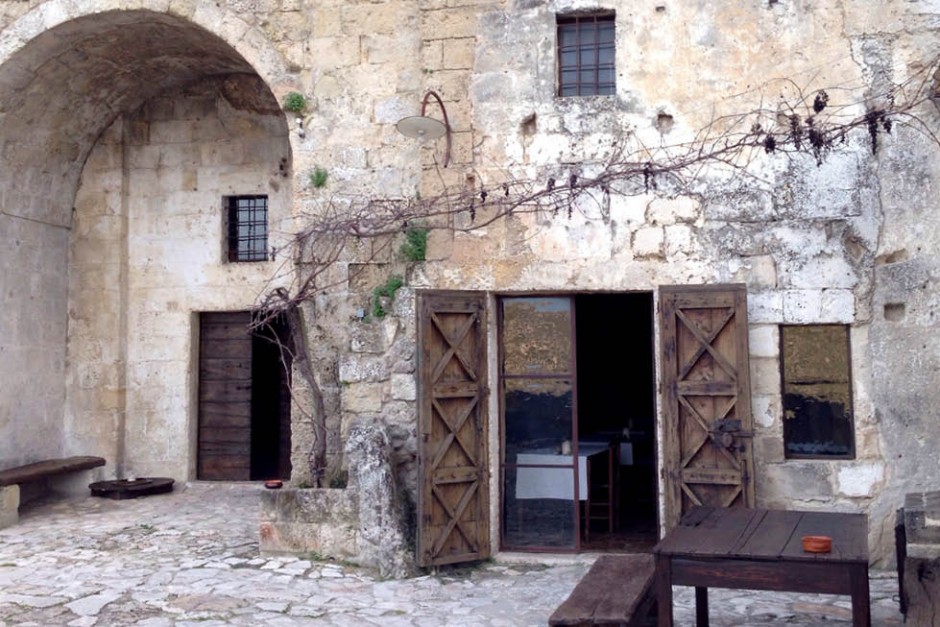 Sextantio Le Grotte Della Civita – it’s a hotel in a 9,000 year old cave in the ancient city of Matera. That pretty much sums up the hotel but it doesn’t really do it justice…it’s a little bit more than just a cave hotel as it’s also a project in ecology and sympathetic restoration and an exciting adventure for its guests.

For Elldrew, who are used to unrivalled luxury (see our previous posts on the Orient-Express and Four Seasons), it was a bit of a challenge to see ourselves spending 4 nights in a cave, but we were comforted by the knowledge that the cave had been stripped back brick-by-brick and equipped with wi-fi, underfloor heating, electricity and Philippe Starck sanitary-ware before the stones were carefully reassembled and restored to its troglodyte authenticity. Yes, we did just say that – the sink in our room was a 500 year old stone basin with Philippe Starck taps; the modern, chrome, power shower jutted out of a 9,000 year old monolith; and the ceramic bath (oh, the bath) had a candlelit cave all to itself, filled by taps extending from the floor. And that’s just the bathroom(s)!

Sextantio Le Grotte is a unique and amazing experience. Arriving at twilight after an hours chauffeured drive from the international airport of Bari, Elldrew were deposited at the foot of a historic staircase and were pointed upwards by our driver (he fortunately carried our luggage but we suspect that was part of the service, and transfer fee we paid directly to the hotel). Up we went, climbing the stairs that were dimly lit by an overhead lamp, and then halfway down the other side which was more magical, candlelit that lead to a large twinkling courtyard: it was hard to follow directions from the porter waiting outside, our eyes darting all over the place as he tried to usher us into the hotels reception (a cave, of course). We were welcomed by the ever friendly reception staff who promptly checked us in. We were then shown the main (and only) communal area of the hotel – also on the same level – which would become our breakfast room-come-guest day room during our stay. 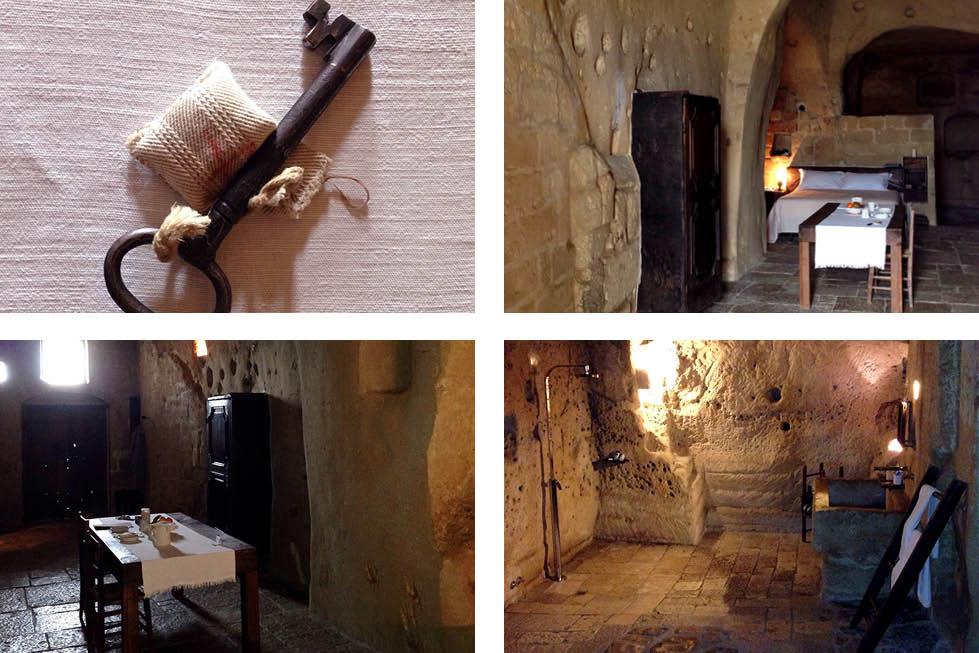 We had also been given a room on the same level, so whilst we had browsed through the hotels website which shows each rooms location, accompanied by a very enticing ‘sneak peak’ image (we had already chosen our favourites), we had no idea which room we were being taken to. As the receptionist turned the MASSIVE iron key in the rusted lock of a rather large antique wooden door, that was Room 4, we were delighted to see more of a cavern than a small cave.

At 130 square metres, but with barely half a dozen electric lights, an array of pillar candles strategically dotted around to provide the best natural reflective light, we were taken on a tour whilst being informed of the history of our cave (or room). Going from one dimly lit cavern to the next we couldn’t work out if we felt like we were in the Flintstones or Game of Thrones, and in our awestruck-ness we stumbled and almost fell into a pair of twin basins carved into the floor (thankfully an iron railing protected us). The area had been some kind of working function as our cave was not just a home but also a workshop in its prior life.

Slightly regretting arriving at night we attempted to unpack. In such a traditional restoration there aren’t fitted wardrobes and drawers, but instead a heavy oak chest and what appeared to be a wardrobe “frame” nailed to the wall. We opened our suitcases in a conveniently raised area that we later discovered would have been the chicken coop or perhaps horse trough (whoops). Not yet being accustomed to the darkness Elldrew rapidly abandoned trying to unpack and instead ordered a glass of local wine, which was brought to our room by the lovely chap who appeared to be the general concierge/bellboy/waiter/bottle washer/handyman and who never seemed to leave the hotel – he was always around and at our beck and call. 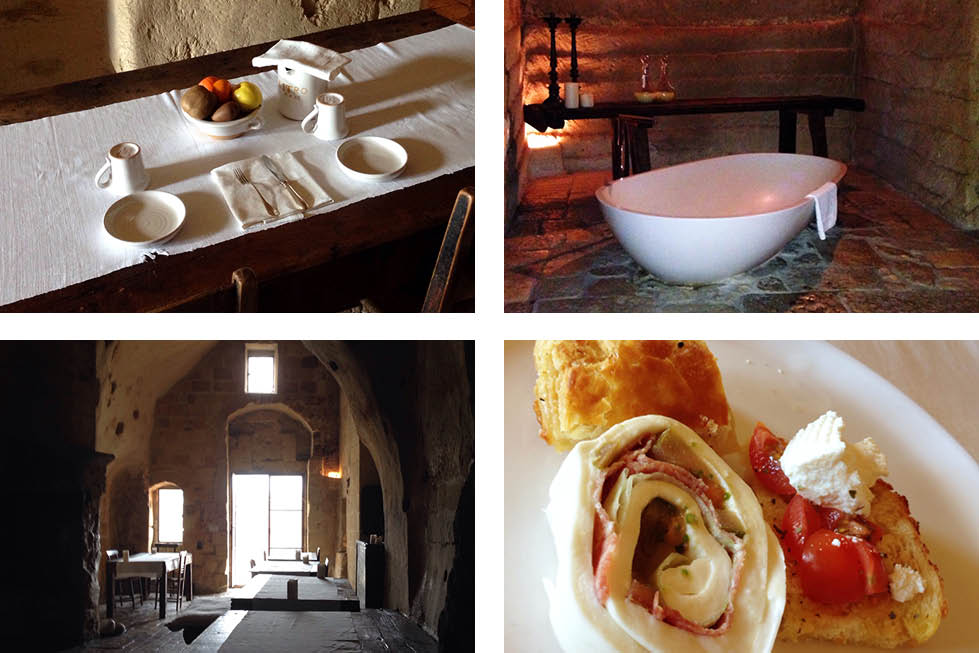 Leaving the room that night for dinner we encountered our first problem…how to lock the door. Fortunately the general handyman was standing by armed with candles and instructions. Honestly, it wasn’t us, prehistoric iron locks are not as simple as today’s well oiled Yale locks, especially in the dark of night. Who knew you had to turn anti-clockwise 4 times (clearly no one rushed back in the day). The following morning we encountered the second issue – how to shave in semi-darkness; which we somehow achieved without any major lacerations. We were relieved we didn’t have to worry about applying make-up. But we had a very sound and relaxing sleep on the large comfy bed, with one of the many benefits of cave living being that sounds don’t seem to penetrate from the outside world.

Breakfast in Sextantio is as much an adventure as finding one’s way around the room. The breakfast room located next door is a large cave that used to be a church, equipped with a “carved-from-stone” equivalent of a pulpit and confessional. Again, candle light prevails and the furniture is reclaimed heavy oak tables and benches however the morning sunshine streaming through does create a rather angelic effect throughout. In keeping with the spirit of the hotel, the food is a traditional local breakfast made from locally sourced produce – not the generic (and rather boring) continental breakfast we expected. It varied each day but included both savoury breads (Ell loved the light focaccia/pizza thing, whilst Drew salivated for the layers of aubergine and puff pastry), cheeses (a whole plait of local mozzarella looked and tasted amazing), and sweet pastries (a sponge cake with cinnamon cream to die for) was all washed down with fresh juice and welcoming coffee. It was a hearty meal to soak up last night’s local wine intake that set us up perfectly for a day of cave meandering!

Elldrew stayed for four days and we can confirm that over that time we did gradually become accustomed to the dim lighting. By the final night we were positively celebrating our “bat vision” (although that may be more to do with the underground bar/mini golf course/night club (yes, golf course) that we spent our last night at – but that’s a whole other story). The hotel was always welcoming after our big day out of exploring, and relaxing with a glass of vino as we prepared for our evening adventures was relished. 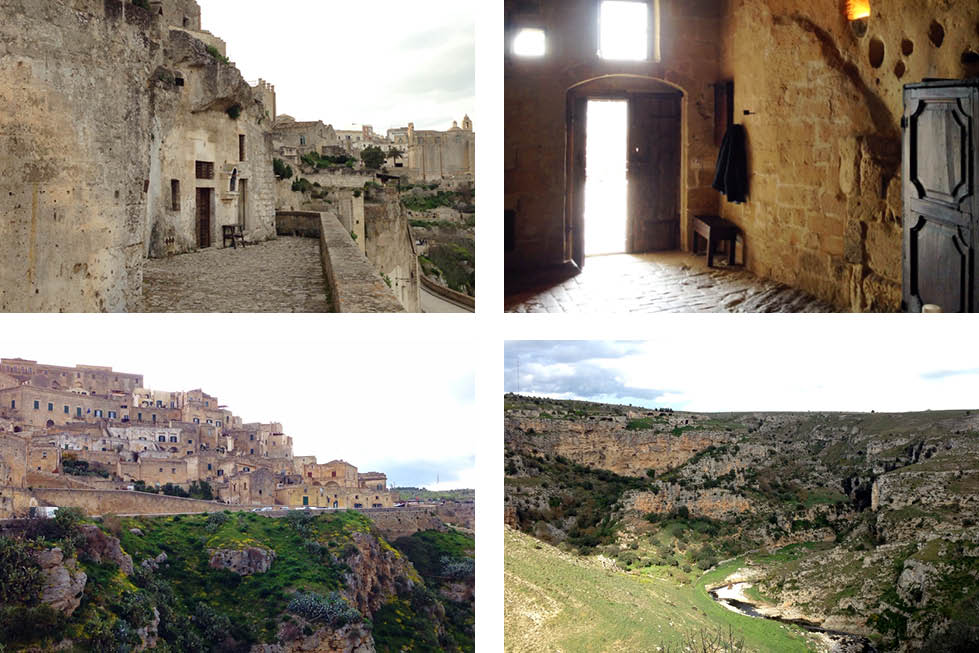 We loved the hotel – it was fun, it was kind of romantic in a troglodyte way, and it was amazing to feel like we were living like our ancestors (albeit with a few “essential” modern comforts). The staff also could not have been more helpful, booking us dinner reservations every night and even rescheduling the arrangements when one restaurant had an unplanned power cut.

The hotel is available on a bed and breakfast basis only so expect to explore the local medieval town of Matera for your lunch and dinner needs. The hotel can also organise a private dining experience (an extensive tasting menu accompanied by wine) but at a price of €200 per person we felt it better to explore the variety of restaurants on offer.

We probably won’t go back, but that’s more because we’ve “done” Matera now rather than any judgement on the hotel, but with another property from the collection just outside Rome, and several more being planned, we’re sure this won’t be our last experience at a Sextantio hotel!