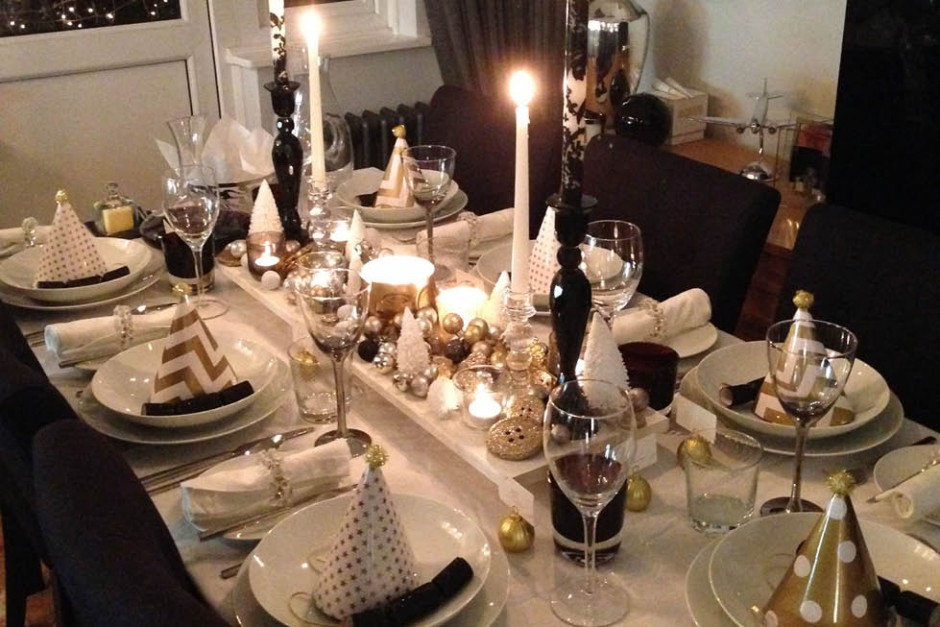 Here at Planet Elldrew our 2014 Christmas break seemed to comprise mostly of eating in some of London’s finest restaurants, in the company of friends and relatives from both home and overseas. This is probably similar to most people’s break but in the interest of avoiding the topic of diets or New Year’s resolutions, we thought it far more fun to share our favourite dining experiences of the festive season.

The celebrations began at the Hawksmoor Bar, Spitalfields where we indulged in their legendary Christmas burger. It wasn’t that we really needed to pre-load with food before the season but when friends booked a booth we couldn’t resist the opportunity. What’s in a Christmas burger you ask? Well only their press release description can really do it justice:

“A juicy slab of buttermilk fried turkey topped with a sausage patty made from Ginger Pig Tamworth pork, along with crispy smoked bacon, sprout tops, spiced cranberry ketchup, a cheeky slice of Ogleshield cheese and turkey gravy for you to French Dip the whole thing in.” 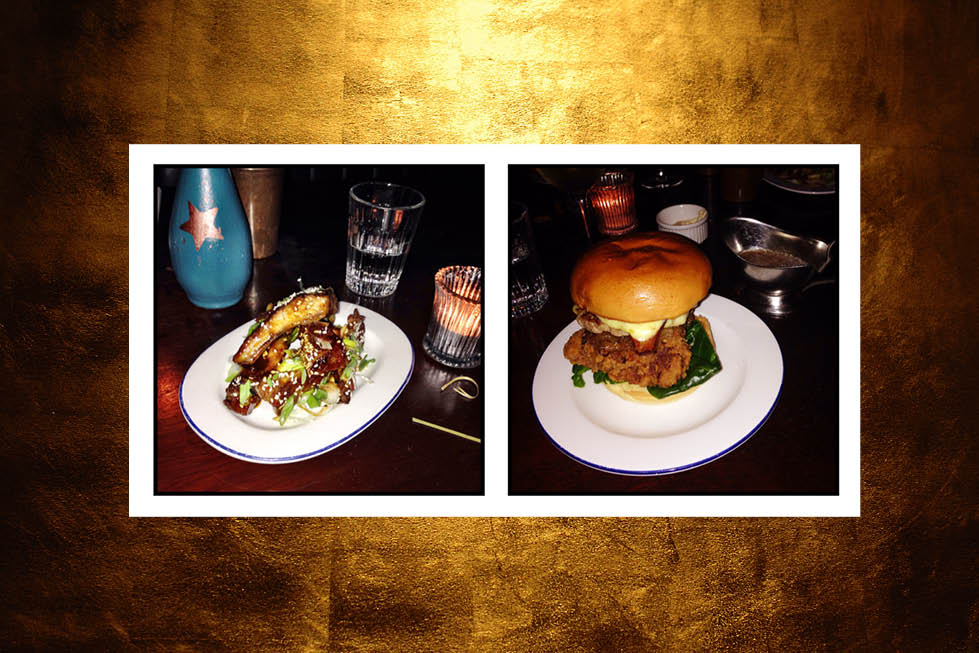 What could be finer than Christmas in a bun? And just to add to our virtual heart attack on a plate we of course started the meal with a sharing platter of Christmas nuggets (minced buttermilk fried turkey thigh and ginger pigs in blankets, wrapped around a melting cheese sauce core with a Panko crumb) served with cranberry ketchup, spicy chicken wings and Seoul ribs. Start the festive season as you plan to go on we say (washed down with a few cocktails and a nice bottle (or two) of wine).

Our next outing was to the restaurant at Ham Yard Hotel, Soho. For this we went for the more traditional menu of roast turkey with all the trimmings. A delicious set Christmas menu offering a great mix of starters, mains and desserts, we really loved the buzz of the restaurant and every morsel we ate. It wouldn’t be fair to critique a Christmas menu, as it is unlikely to reflect their regular food, but we will say that it was excellent and the portions were so generous no one on our table could clear their plates. We finished the meal with coffee and groaned at the sight of petit fours, which even the chocaholics amongst us couldn’t finish. Elldrew promise to return and provide a proper critique of Soho’s latest trendy hotel but here are a few of the dishes. 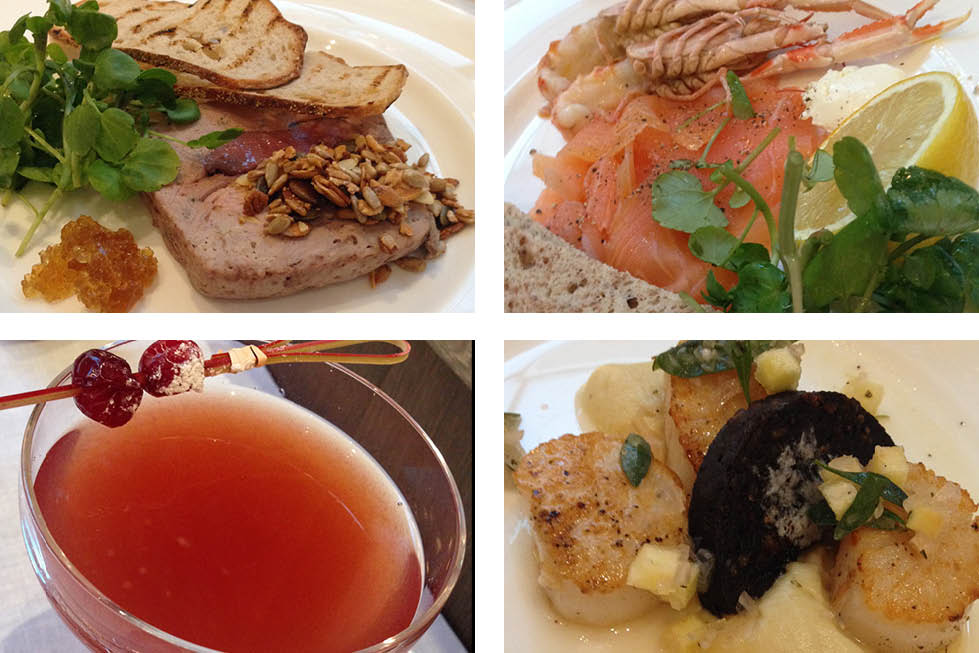 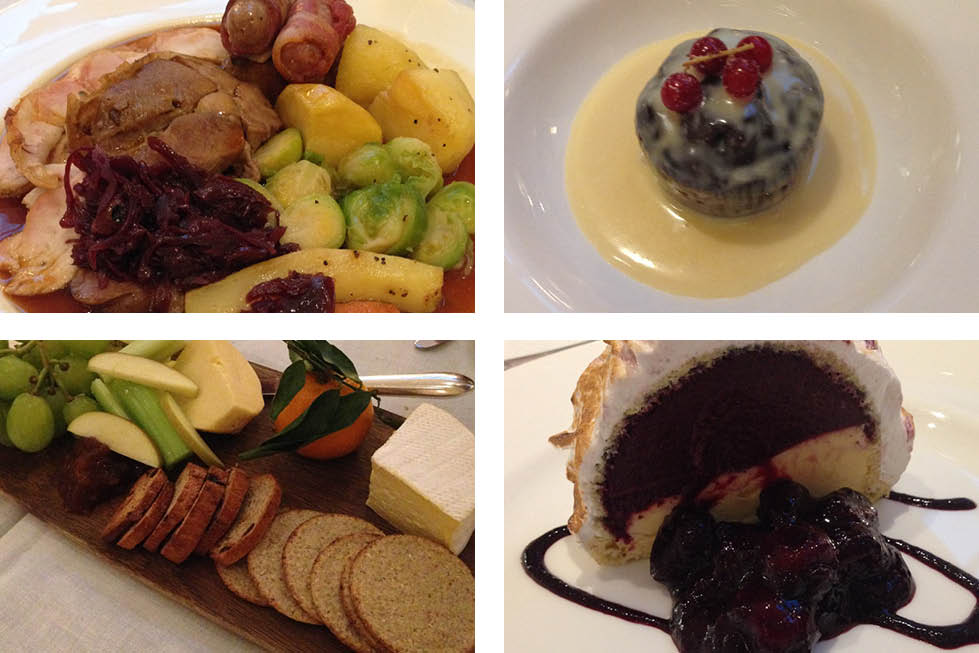 Having barely digested all that turkey, our next stop was Corbin & King’s The Colony Grill Room at The Beaumont Hotel, Mayfair. We’d heard mixed reviews, but being huge fans of The Wolseley we were itching to try their new restaurant. We liked it and we thoroughly enjoyed everything we ate but felt the restaurant was lacking the atmosphere of some of their other restaurants; perhaps it was due to it being two days after Christmas, when London is at its emptiest; perhaps it was because we had a big banquette downstairs tucked to one side, so not in the heart of the restaurant; or perhaps the restaurant is more subdued and aiming for an older crowd. We would go back. What it didn’t have in atmosphere it made up for in food. Ell loved his Shepherd’s Pie “almost as good as Mum’s”, which from anyone is a darn fine complement. Drew’s Veal Pojarski was a nice twist on a traditional schnitzel, flavoursome and comforting. We didn’t have starters but the table shared several desserts and the flambéed banana dessert probably stole the prize, although the ice cream sundae (chosen from a dedicated sundae menu) took a close second. 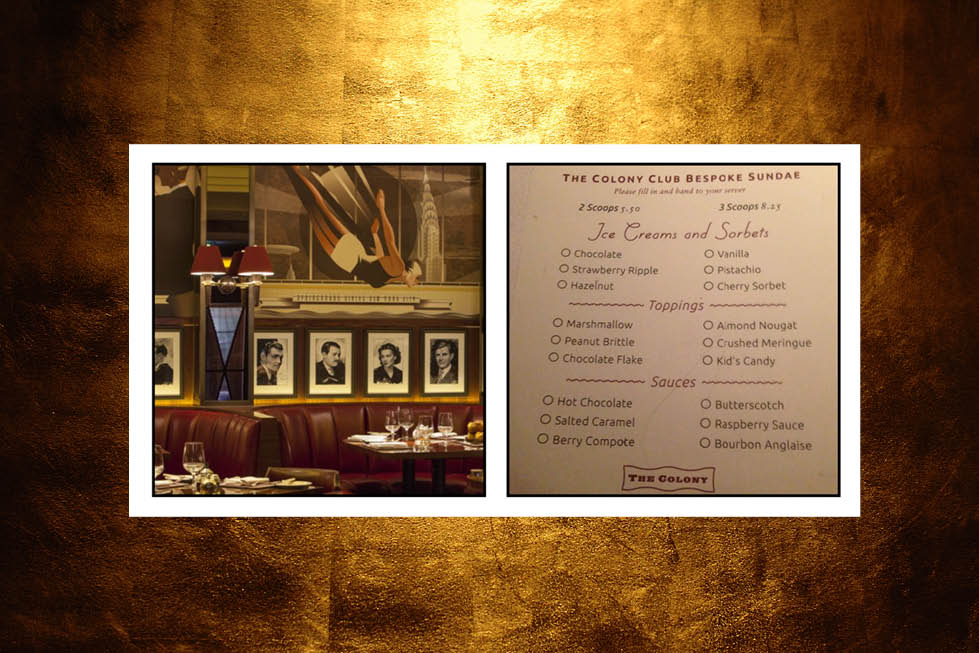 Hot on the heels of The Colony saw us return to our Corbin and King favourite – The Wolseley, Mayfair – for lunch with an out-of-town friend (well, any excuse to visit The Wolseley really). We know it has its critics but we do love it there and think it is consistent in both its food and atmosphere. We didn’t deviate from our standard menu choices but we know the menu so well why would we? The Wolseley got bonus points for giving us a great table just yards away from actor Dougray Scott…it probably helped that our guest had a crush on him, so another fantastic lunch.

Post Wolseley digestifs were at The Rivoli Bar at The Ritz, Mayfair – not that we needed a digestif but it would have been rude not to pop in for just the one (or two) drinks. 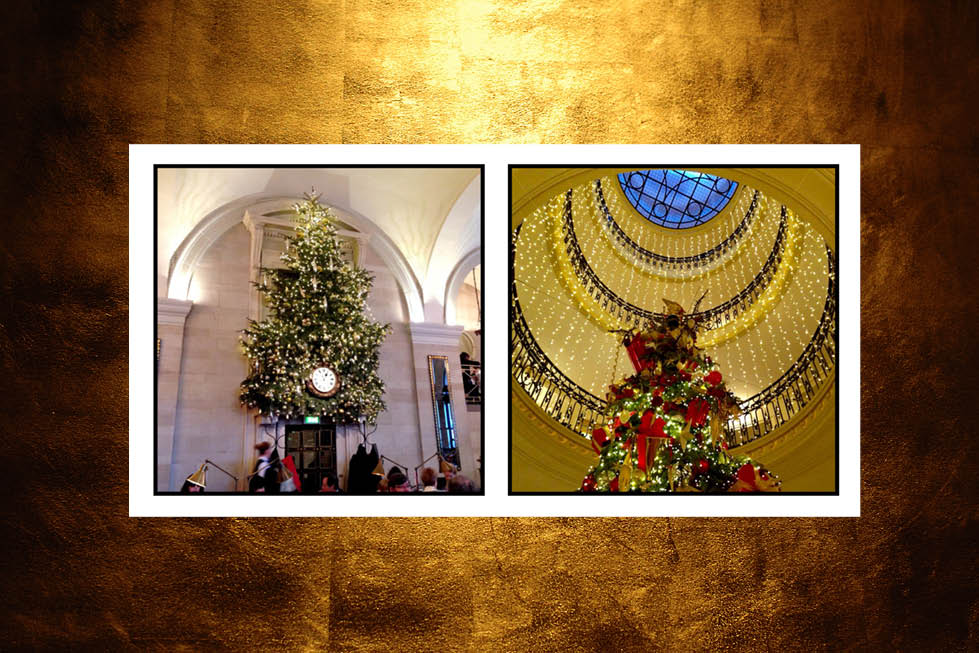 Pausing briefly from eating out to entertain at home, we had some friends over for a small New Year’s Eve dinner party which included a walk up to Parliament Hill to watch the fireworks across the London skyline…a brilliant night. Then, a couple of days later, we were back out with yet more overseas visitors at Chotto Matte, Soho. We’ve blogged this one before and went back because of how much we loved the food. We weren’t disappointed, it was nice to see that the restaurant had completely refreshed its menu – there was barely a dish on it that we’d tried previously and the food was outstanding. We love Chotto Matte’s mix of South American and Japanese, we love the well balanced flavours and really unusual dishes that we tried (Yellowtail tuna, cherry tomatoes, jalapeno, coriander and yuzu truffle soy anyone?). We still don’t love the restaurant vibe; it’s a bit like a nightclub and we hate having to queue with the drunken bar crowd to collect our coats after the meal, but with food this good (and a 100% improvement on service since our last visit) we’ll keep going back!

Finally, we ended our festive break at Scarfes Bar at the Rosewood Hotel, West End. By now we were way too full to contemplate eating and just had lazy drinks with overseas friends (Drew had a green tea – shocker!). It being the first day of the new year before work for most the bar wasn’t full however it had a lovely warming atmosphere with a roaring log fire and shelves lined with antique books. It was the best place to wind-down from all the hubbub of the other restaurants and busy-ness of the whole Christmas period. It also has the most wonderful ‘Olde English’ décor so the perfect place for our friends teenage daughters – who’d never been to London – to experience a stylish but traditional English bar. The hotel looks stunning (shame we live so close otherwise we could have checked ourselves in for a night of luxury). 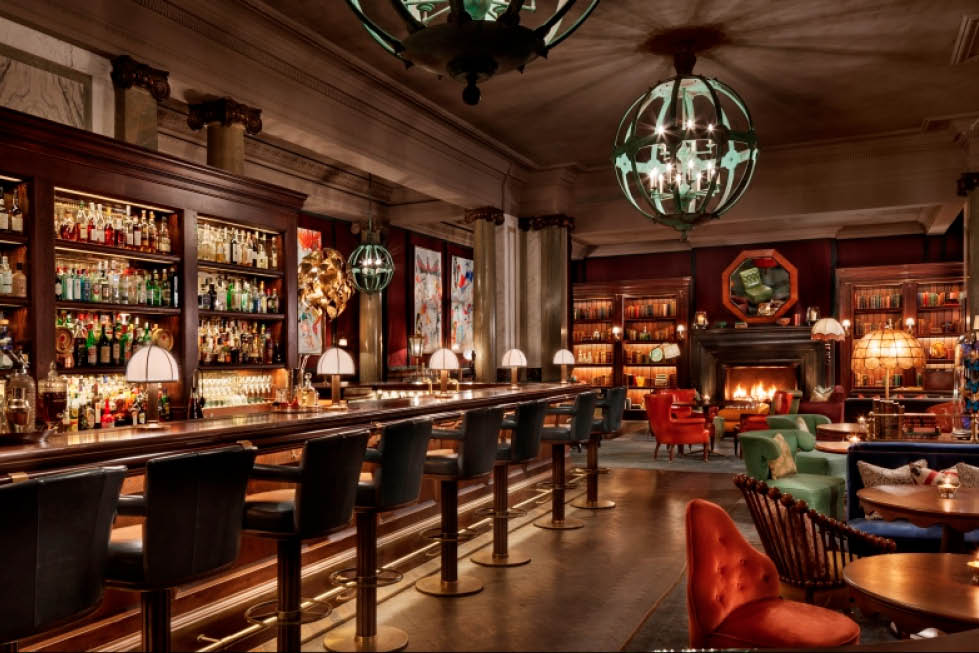 2015 will no doubt bring more food and more restaurants but for now we’re going to be hitting the diet – neither our waistlines nor our bank manager are thinking of us fondly at the moment! Oh wait, we’re back at Quaglino’s next week and then sampling the winter Alpine retreat that is Le Chalet Rooftop Restaurant at Selfridges…we’ll stop writing now. Happy New Year to all our readers.