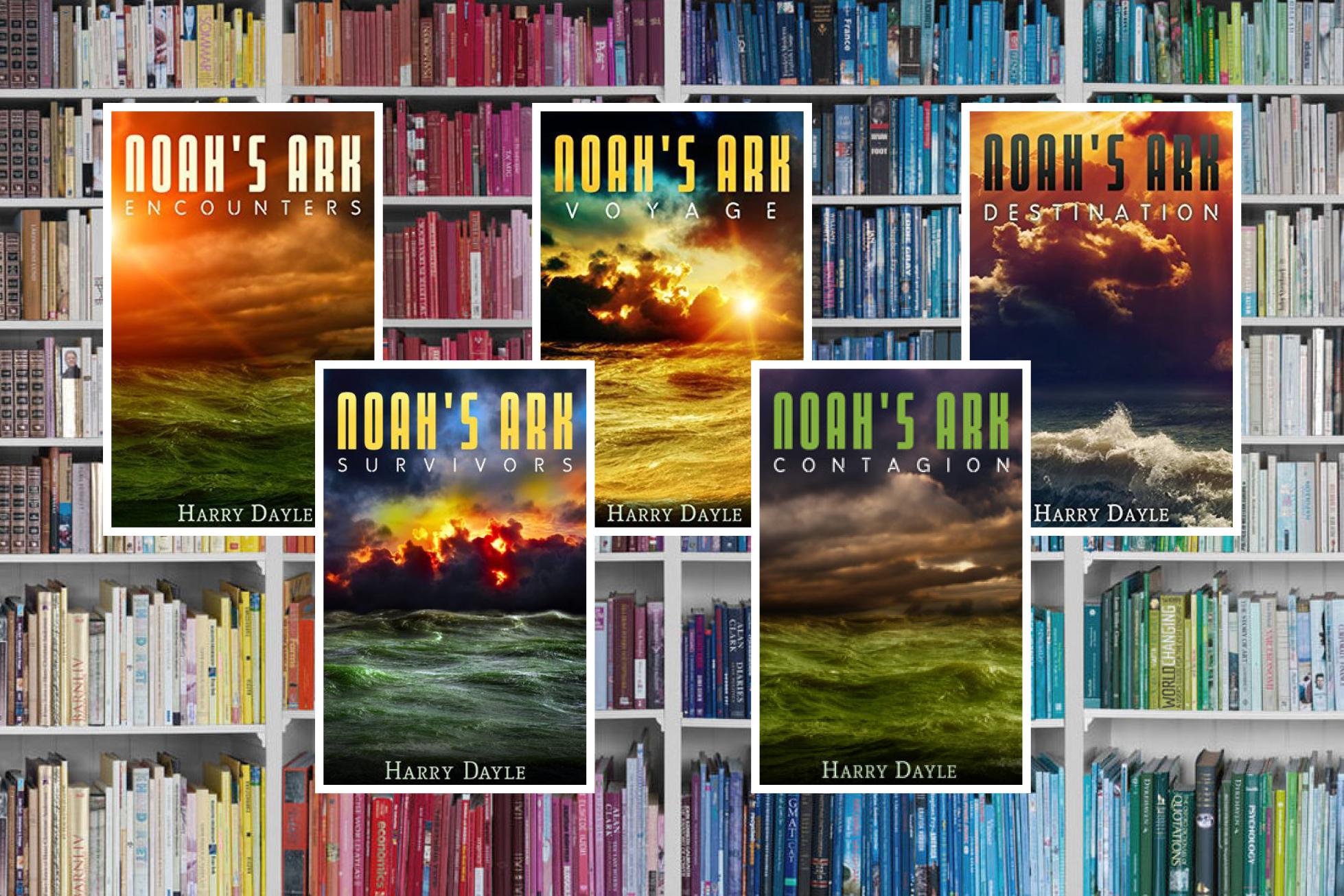 For a long time Elldrew were opposed to the Kindle. That smell of old books, the sound of a cracking spine, the rustle as a page is turned or the ever-expanding bookshelf seemed compelling reasons NOT to move to modern technology. But after some consecutive travel, carting 8 heavy books around between us, we borrowed a kindle and finally got what all the fuss was about…eReader’s were the future!

Now whilst none of this is anything new (in fact we are probably two of the last avid readers to embrace the technology) what Elldrew have learned to love is the ability to discover occasional hidden gems of self-published work from such a huge online library. In fact, for the last few months, author Harry Dayle has hooked Ell with his Noah’s Ark series.

Ell doesn’t entirely recall how he stumbled upon the series; Book One (Noah’s Ark: Survivors) must have been “Recommended” or a “Daily Deal”, but it sat unopened and unloved for many months. Once started he couldn’t put it down, in fact he is now 2/3rds through the fourth of five books in the series. It’s so good that this blog is going out even before he’s finished reading the series, he doesn’t want to unintentionally let slip any detail of the final act.

To be clear, the Noah’s Ark series is not a biblical story, it’s a great piece of post-apocalyptic fiction. In fact, the title, and the name of the main protagonist (Jake Noah) is a little bit cheesy, but clever all the same when you learn about the storyline from the back of the first cover:

May 1st 2014, the earth is scorched by a stray asteroid, wiping out almost all life. Almost, but not quite. 300 souls aboard a cruise ship visiting the north pole are spared by a freak of nature. The ship’s First Officer, Jake Noah, was looking forward to getting back to dry land once and for all. But then the world ended, and now he finds himself reluctantly in charge of the last handful of survivors of the human race. The limited resources on board mean that just staying alive will be a struggle. With the threat of mutiny ever present, can Jake rise to the challenge and lead his crew and their passengers on a quest for safety, or will he take the easy option and leave anarchy and chaos to prevail?

Something about the whole post-apocalyptic fight for survival always attracts Ell, but they’re frequently much the same, descending into another zombie story, battle for good vs evil or a last man on earth depressing monologue. Noah’s Ark is somewhat different; the premise is unique and an interesting twist on the norm, and it is definitely not a copy of ‘The Last Ship’ (the book nor the TV series). Huge cruise liners are virtually self-sufficient cities, carrying vast quantities of food and drink with an infrastructure to support the passengers and crew, so the usual “fight for survival” is somewhat less urgent, at least in the first instance. Instead you have a huge vessel packed with different personalities with little in common – apart from having booked the same holiday – along with a professional crew who themselves consist of a diverse group of sailors, hotel staff, catering staff and entertainment staff. How this group come together to survive the end of the world, and how they convert a luxury liner from a floating pleasure palace to the last bastion of human life is the underlying theme of the book although, of course, they have their fair share of conflicts and dramatic moments.

Without any doubt the author uses a fair bit of “poetic license” in coming up with some of the situations the ship and its crew finds themselves in however, overlooking these, there is a very compelling struggle to define “what do we do next” for everyone on board. Book Two and Three continues along the same scenario; in fact the author has even written a spin-off series when some of the survivors leave the ship (I can’t say more for fear of spoiling the series). I also can’t say more without giving too much away – the fact that Book Two is bylined “Contagion”; Three: “Encounters”; Four: “Voyage, and Five: “Destination” will likely give you a good sense of the direction the series goes in.

I’ll concede that the series is unlikely to win any literary prizes, probably the books are a little wordy, possibly the three I have read so far could be condensed into two, and you may need to occasionally suspend your common sense. But overall they are a good old fashioned, clean living ‘Boy’s Own’ type of adventure story. They’re fast paced, easy to read and hard to put down; I have broken every rule by reading them all back-to-back (and paying full price for them – I mean who does that with a Kindle?) but I am thoroughly enjoying them and suspect that if I had been stuck on a beach I could have read the whole series in the space of two weeks! I have no idea who Harry Dayle is (his website says barely anything) or what inspired him but Elldrew think he’s a great storyteller, and whilst I may need a break from the “end of the world” it’s quite likely that I may come back to the spin-off series in the future.

As a sideline comment; please don’t be put off by the awful critiques of Harry’s spelling on amazon.com. Harry is British. The books use British spelling throughout (which seems to offend a number of readers across the Atlantic). I also suspect it’s for this reason that each book includes the following note to readers:

This book is as British as its author. Readers used to American English may find some spellings and phrases differ slightly from those they are more familiar with.

Personally, as a Brit, it was a refreshing change to read something that has c’s instead of s’s and s’s instead of z’s… and that ends words with “our” rather than “or”, but I would hate to ignite the debate further, I have a compelling read and series finale to get back to!