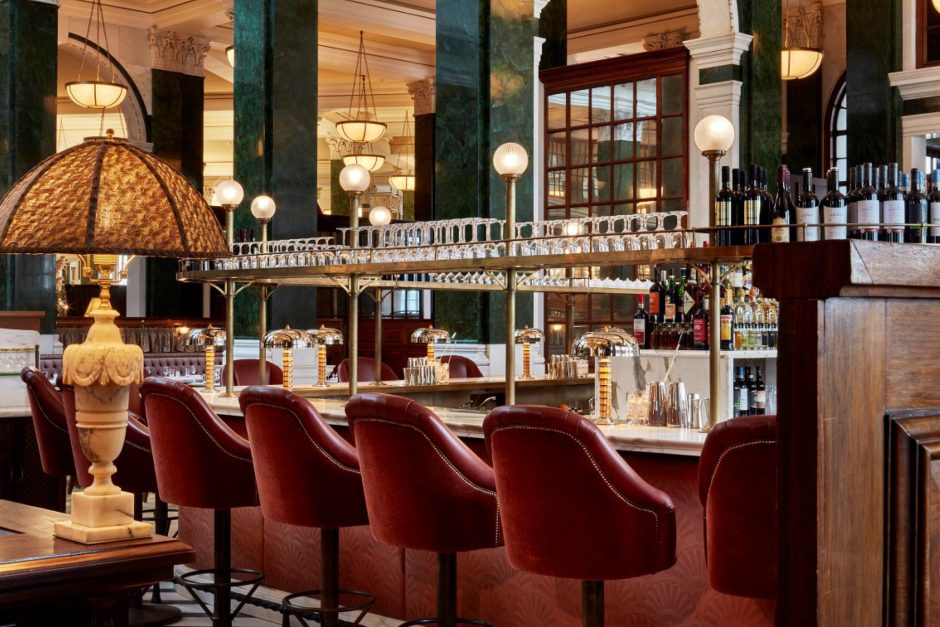 Early in 2017, after years in hibernation, the old Midland Bank headquarters in the City re-emerged butterfly-like and transformed into London’s hottest new destination hotel, The Ned, run by the uber-chic and contemporary Soho House & Co. For a group notoriously strict about the type of people they admit into their “exclusive” creative industry only members’ clubs, it was revolutionary that they decided to target the financial district with such a decadent statement. Like everyone we were excited to experience it, even more so when we heard one of our favourite Mayfair restaurants, Cecconi’s, was opening a second branch; set to be the jewel in The Ned’s line-up of nine restaurants.

Three months after launch we managed to secure a table at Cecconi’s, so we eagerly headed into the hotel for a pre-dinner drink, to see what all the fuss was about. Did The Ned live up to its prelaunch hype or did the many scathing reviews we’d also read prove accurate? Being brutally honest, whilst there were many redeeming features we and our dining companions were astonishingly disappointed.

Before we tell you why, let’s make it clear that Cecconi’s should take no responsibility in this decision; the meal itself was delicious and the staff attentive. Yes, we could have grumbled that the tables were a bit too close together and the bank vault styled pizza-oven should not be out of service, but we can put that down to teething problems. Furthermore, and again no fault of their own, the night we attended they experienced a leak from the floor above that saw water running down one of the massive celling lights, causing them to close a section of the restaurant. When we advised our waiter that we would not be having dessert, but a digestif instead, we were swiftly approached by the maître d’ who asked if we could relocate from the restaurant, to a table in the main lobby, due to the backlog of customers waiting to dine because of the leak. We were happy to accommodate…shame the service level stopped there.

So, what was the problem? Well fundamentally it’s The Ned itself. At the very heart of the grand conversion is the 3,000 sq m former banking hall – it’s impressive, it’s beautiful but it’s massive. On arrival one is awestruck by the majesty of the space. The clever refurbishment retains the original vast grandeur of a busy banking hall only separating out the different areas with eye height room dividers, spreading labyrinth-esque out from a central “plinth” where a piano player taps out George Gershwin. Credit must be given to the designers who have so carefully restored the original fittings and sympathetically converted the space from bank to hotel. 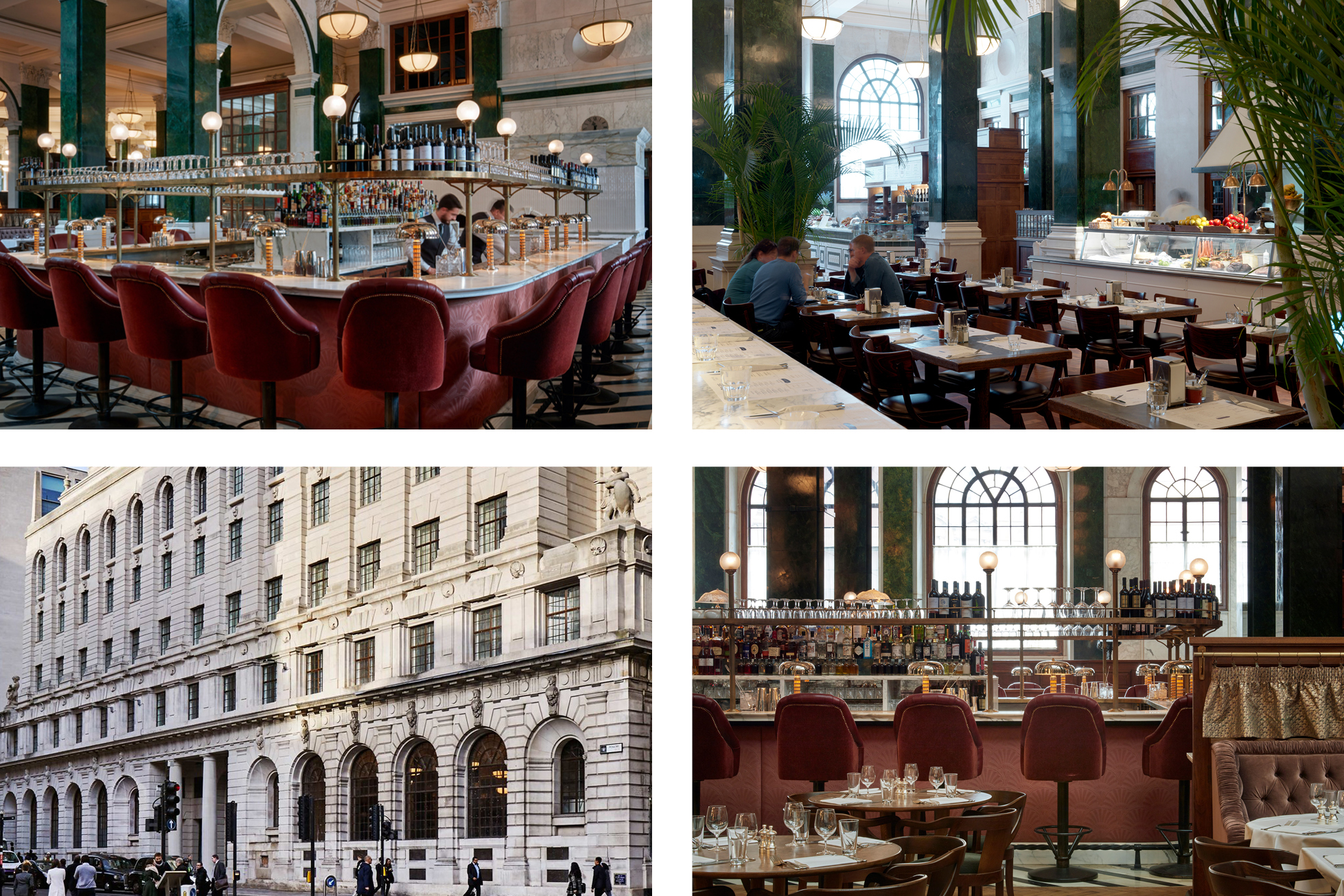 However, perhaps a victim of its own success, The Ned is very busy (there must have been close to a 1,000 people). It’s such a huge space that whilst this adds buzz and atmosphere, it’s to their detriment as there seems to be little or no organisation, limited signage and it’s unclear who are patrons and who are staff. This may be intentional but arriving on a busy Thursday night it’s also disorientating and to make things more complicated, this is the City, so the man who appears to be formally dressed in the style of a concierge heading in your direction is most likely a high-powered executive, but as this is also Soho House, that trendy young thing teetering around in Louboutin stilettos may in fact be a waitress. Some (not all) of the waitresses are also dressed like French maids. It’s totally confusing.

Elldrew initially headed towards the least crowded bar in the corner hoping for a drink, but it wasn’t a bar, it was “Millie’s”; a Lounge Café with a bar area where we were welcome to have a drink but only in the standing section (which was naturally full) – the empty tables were reserved for diners. We then headed for what looked like another bar; but that was actually Cecconi’s, just another seating area tucked behind another divider with another bar area. Behind us was definitely a bar, surely, nope, that was “Malibu Kitchen” The Ned’s healthy Californian inspired restaurant who also does cocktails for diners. This was becoming frustrating and the only differentiator to inform yourself that you have indeed entered one of the hotels many restaurants was the logo on the menu placed on the tables (that you can’t sit at because they’re reserved). So it became a game of looking at tables to see where you were, whilst trying not to head-butt other patrons doing exactly the same thing. The sea of people does nothing to help differentiate the space, which has been referred to as an upmarket food hall. We agree.

After we looped the lobby for the second time we came face-to-face with “The Nickel Bar”. This is the busiest area on the floor and we should have known that it’s the main hotel bar; after all this is Thursday night in the City and even though it’s August and London is summer holiday empty, every banker, asset manager, and personal assistant seems to have headed right here for a post-work drink. Not moving any closer to getting served we spot an opening back at Millie’s, so squeezed past a table with a few ‘Made in Chelsea’ cast members to finally order and enjoy some surprisingly reasonably priced aperitifs.

Dinner itself passed without incident and having been relocated by the maître d’ we found ourselves where we left off, in the heart of the building, sitting in The Nickel Bar, we think. The pianist long replaced on the plinth by an up-tempo jazz band trying to play louder than the noise echoing around the expansive room. One of our party had to go to the bathroom so left his drink order with us – the only bathroom serving the entire hall is downstairs to one side of the packed floor – and as the rest of us were choosing our drinks a charming young man in a yogi bear rangers hat approached:

Ranger Smith looked blankly at us. “I’m sorry sir but we’re going to have to ask you to move as this table is reserved for dining guests”,

“But we’ve just dined at Cecconi’s and the maître d’ sat us here as they needed the table back due to the water leak” we advised,

“Never mind, I’ll have a Midnight…” Ranger Smith turned his back and walked off.

20 minutes later, with no sign of any staff wanting to take our money, feeling semi-deafened from the constant noise and sick of watching the ongoing parade of people – oh actor Jamie Bell just walked past, rather quickly (do you think he knows where to get served?) – Elldrew and crew decide to call it a night, gathering our things and quietly leaving, past the door-people protecting the entrance as if the once vaults of this mighty banking establishment had been left wide open for all to plunder.

Ned you are a beautiful space but it’s not the luxe experience Elldrew expected. Perhaps as the buzz settles it will calm down, if not, then that’s also fine, Elldrew will gladly (and quietly) dine at Cecconi’s Mayfair outpost and leave the trendy young things to populate this trendy young space.

Book Reviews: Addicted to technology? Who us?