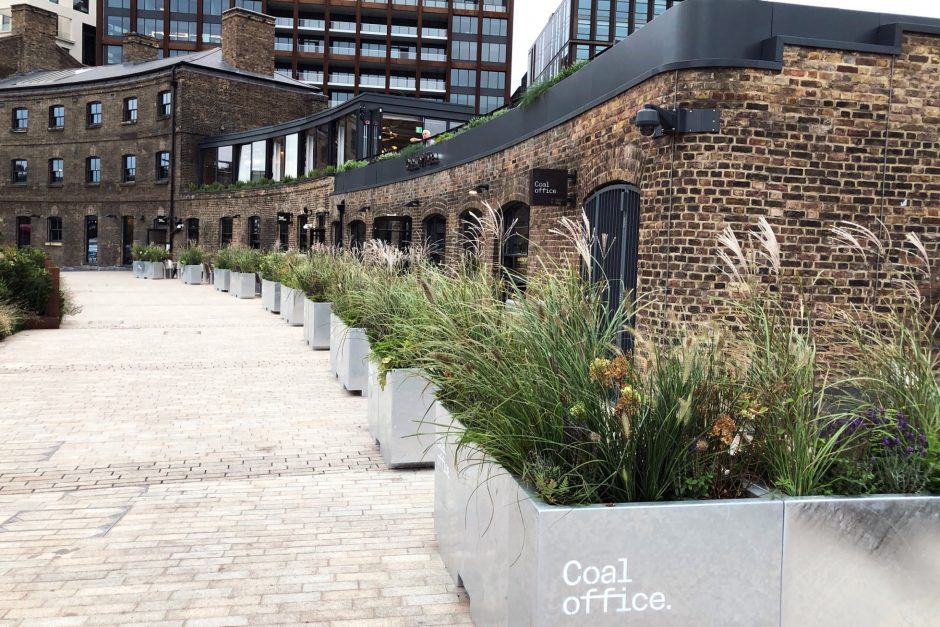 Elldrew think that the last time they saw the back corner of Kings Cross (the bit between the gas holders and the canal) was over a decade ago, in the early hours of a Sunday morning, on their way home from a misspent evening at one of the legendary nightclubs that used to occupy that area. Returning, more than a decade later, we were wowed how much the Kings Cross redevelopment had transformed this grungy clubbing Mecca. We weren’t there just to reminisce for we had managed to sneak a spot at the coveted Summer Preview of  Coal Office restaurant; a joint collaboration between chef Assaf Granit (of Palomar fame) and designer Tom Dixon (of all lovely shiny copper objet fame). Coal Office is a part of Tom Dixon’s new headquarters in the building that, unsurprisingly, used to be the coal office on Bagley Walk, named after the club that used to be there – there’s a pattern to the names Elldrew surmise! 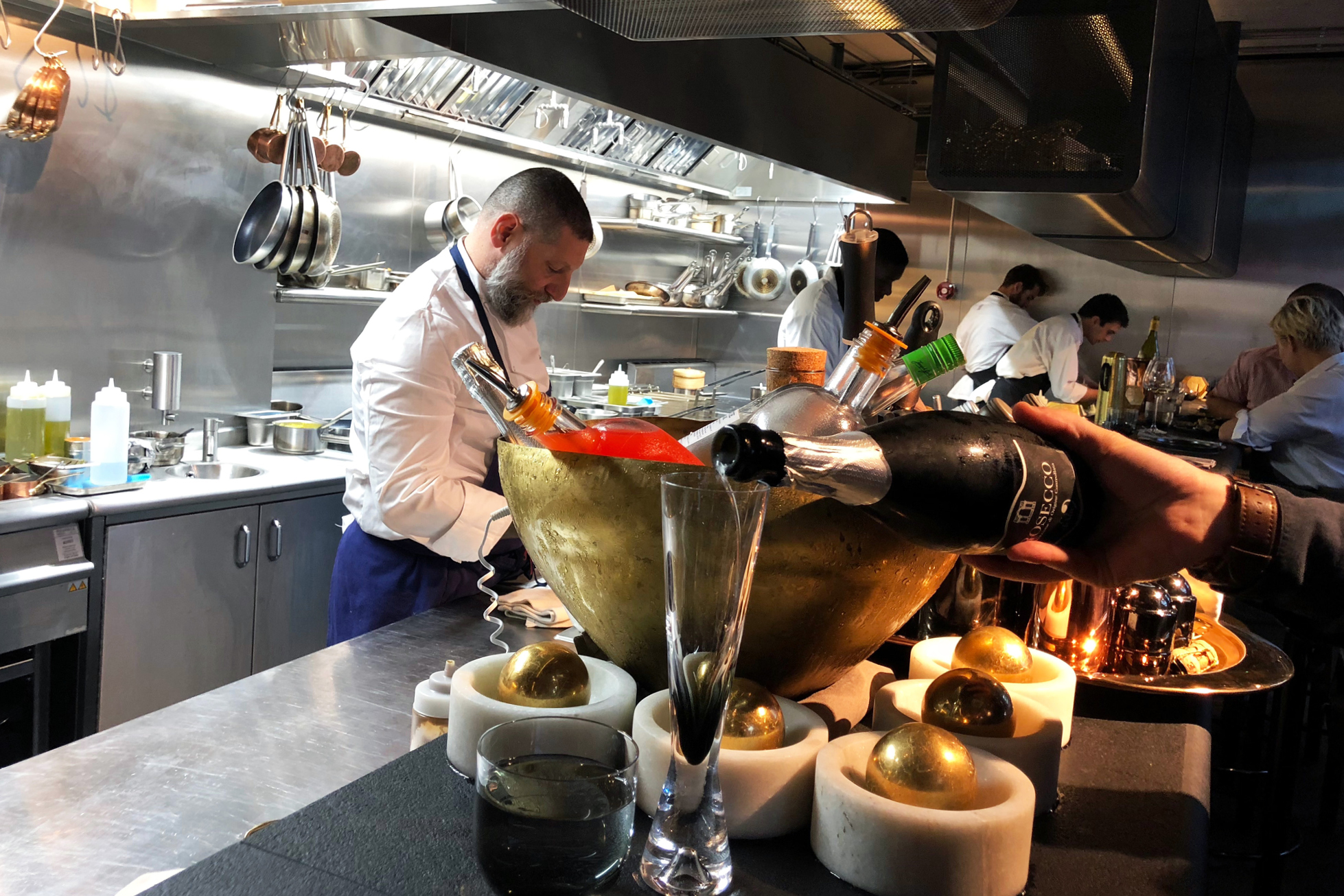 Entering the restaurant, we loved the constant reminder that this was Tom Dixon’s baby; we are fans of his work after all, so it was interesting seeing it laid out by the designer himself. From the lighting, furniture, crockery, funky tunes and welcoming vibe, it just came together perfectly. The restaurant is long and narrow, dominated by the open kitchen which, if you’ve eaten at any Assaf Granit restaurant, you’ll know is his style; we happily settled into two seats at the counter. It must be said that there are tables of 4 opposite the kitchen, with more seating options at the back (or main floor) of the restaurant. The highlight of our seats was that chef Assaf himself was cooking – that’s kind of awesome in its own right, but seeing the master in action in his kitchen was beyond cool.

The staff too were wonderful; from the moment we walked in until the moment we left the rooftop bar several hours later, they were full of buzz. None of that snooty “too cool to talk to you” that can be so common in trendy London establishments. We shared a welcome ‘shot’ with the maître d’ when we were seated, and another a little later to cleanse our palate. The staff were kept busy but that didn’t stop them from checking we were okay or offering advice on the menu throughout the evening. Even one of the chefs across the counter from us paused mid-oven opening to guide us on a dish and chef Assaf swung by to recommend a dessert when we had trouble choosing! 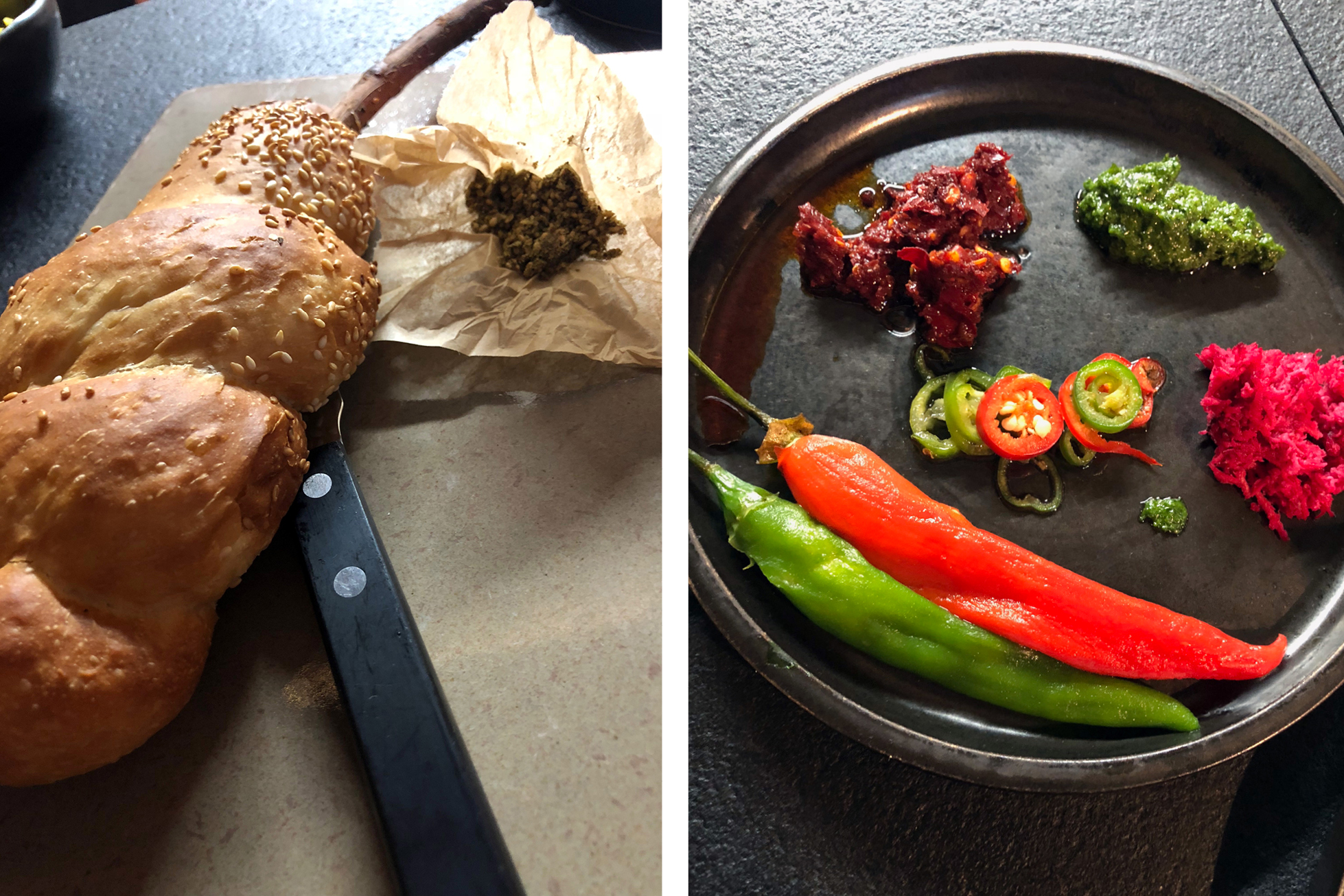 So, onto the food. After being wowed by the design, atmosphere and staff we wondered whether the food might take a back seat at Coal Office, but you’ll be glad to know that it doesn’t. It’s another trendy sharing/tapas style experience, so if you’ve eaten at Palomar or The Barbary then you’ll know what to expect; there’s pitta and Assaf’s famous Machneyuda polenta, as well as a host of new dishes. Whilst we pondered our choice we ordered a ‘Pretzel on a Stick’ and the ‘Plate for the brave’ – and whilst being given a tour of the different spices on the Plate we had a giggle with the waiter over the correct pronunciation of Chrain (an Ashkenazi Jewish “dip” of beetroot and horseradish that Ell didn’t know anyone other than Mrs Elswood made). 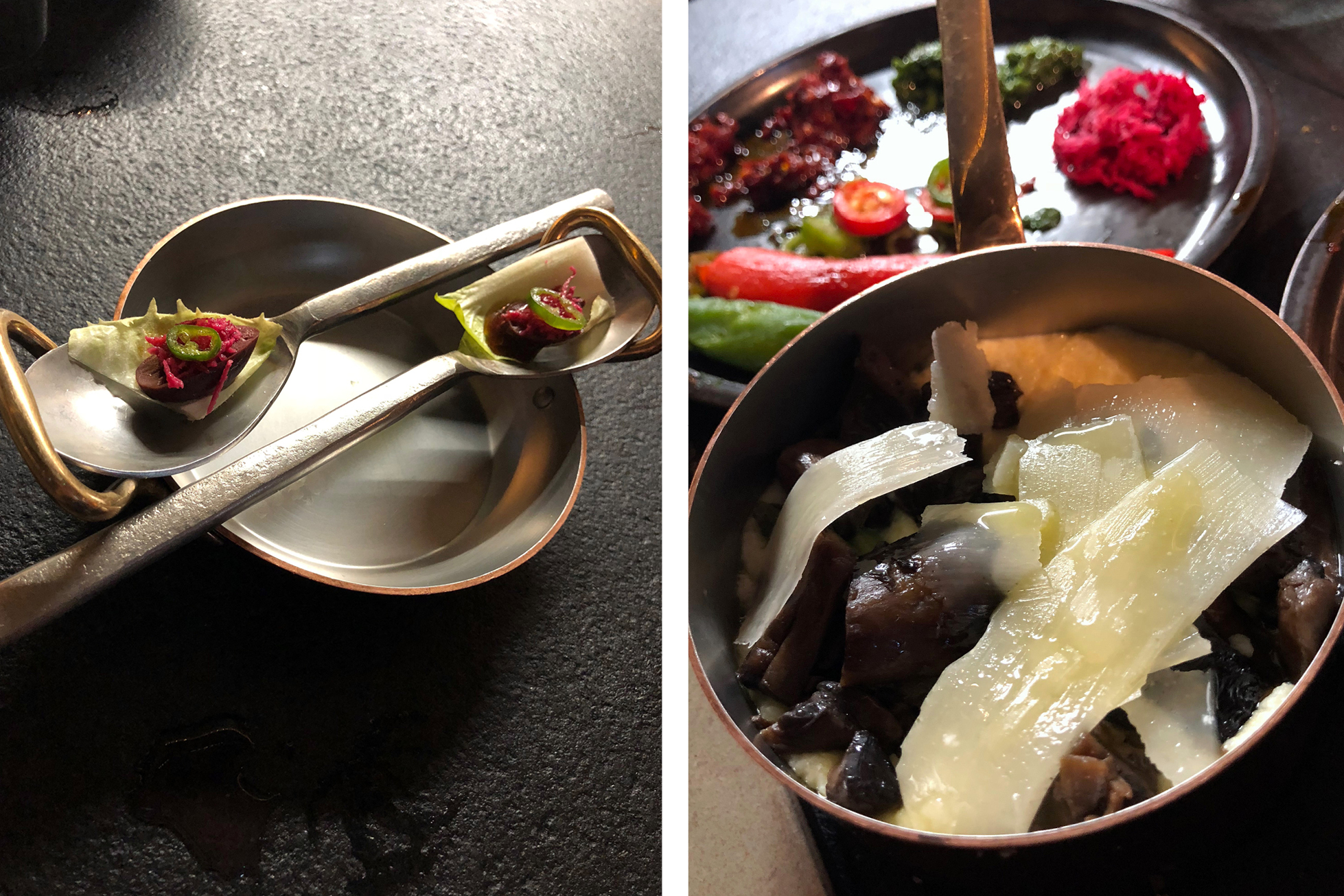 After a steer on dish count from our server we settled on starters of the Machneyuda polenta, the josperized aubergine with green Tahini and pistachio, and a Moroccan fennel salad. All vegetarian but all light and summery with flavours that zinged; the polenta is an Assaf classic, that he serves in every restaurant. Ell could have had double aubergine whilst Drew virtually licked the bowl of the fennel salad. 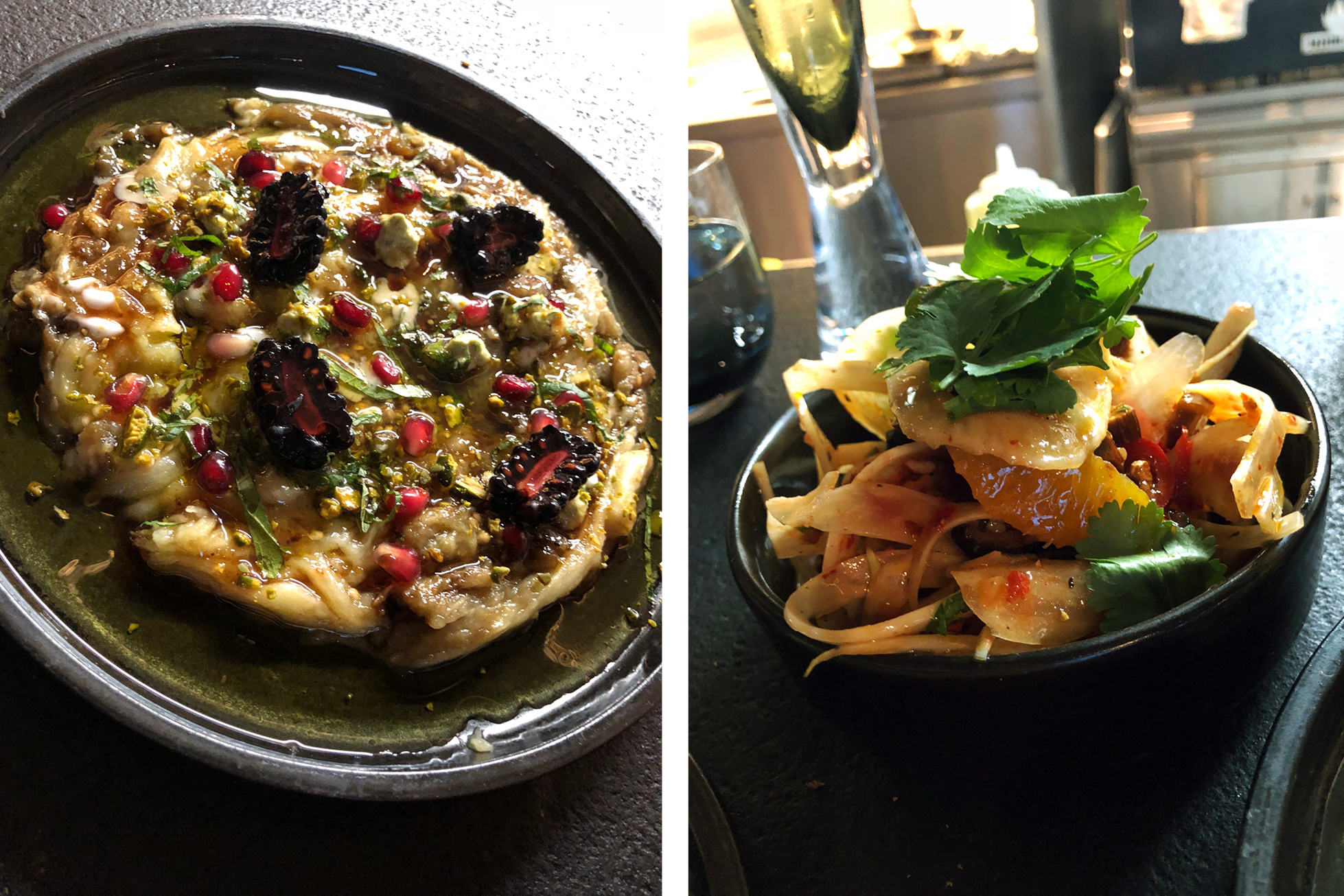 For the main course we had a Shikshukit and a Freekeh Risotto. The Shikshukit is a lamb and beef kebab served with aubergine, Thigurt and pitta. It was the only meat we ordered all evening, and we could have had an entirely veggie meal except that we loved the Shakshukit at Palomar, so much that we had to try this variation. The risotto was a crispy crunchy textural delight with green wheat, Skordalia cream and an incredible black aubergine crisp. All dishes were fantastic, we could not fault anything we ate. 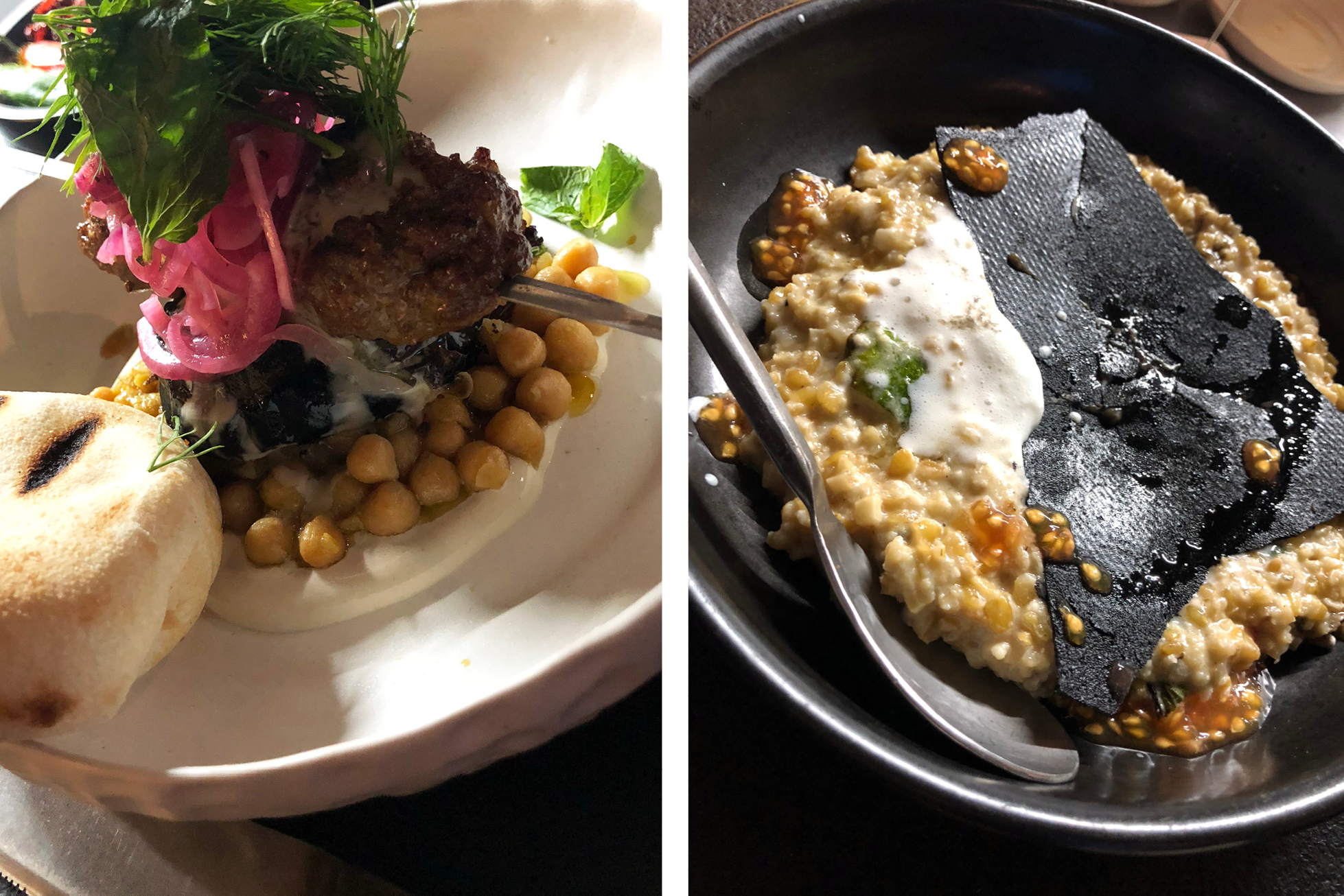 Contemplating room for dessert, our lovely maître d’ swung by proffering a shot of Arak (an aniseed Israeli digestif) with the promise it would cut through the food and make space for dessert. It sort of did, but only enough to share one dessert between the two of us. Every member of staff seemed to have their own preference as to what was the star pudding, but when chef Assaf told us, that for him, it was Uri’s Mothers fig Basboosa, we figured we had to go with that; after all this dessert is not just the headline at Coal Office, it comes all the way from Machneyuda, his original Jerusalem restaurant (Uri is the co-chef there in case you’re wondering). Basboosa is a traditional Middle Eastern cake made with semolina – it’s nothing like the semolina we remembered from school days – but a sticky gooey delightful cake. At Coal Office it’s served with Tahini ice cream but, if we’re honest, the ice cream wasn’t to our liking, so we happily enjoyed the Basboosa. 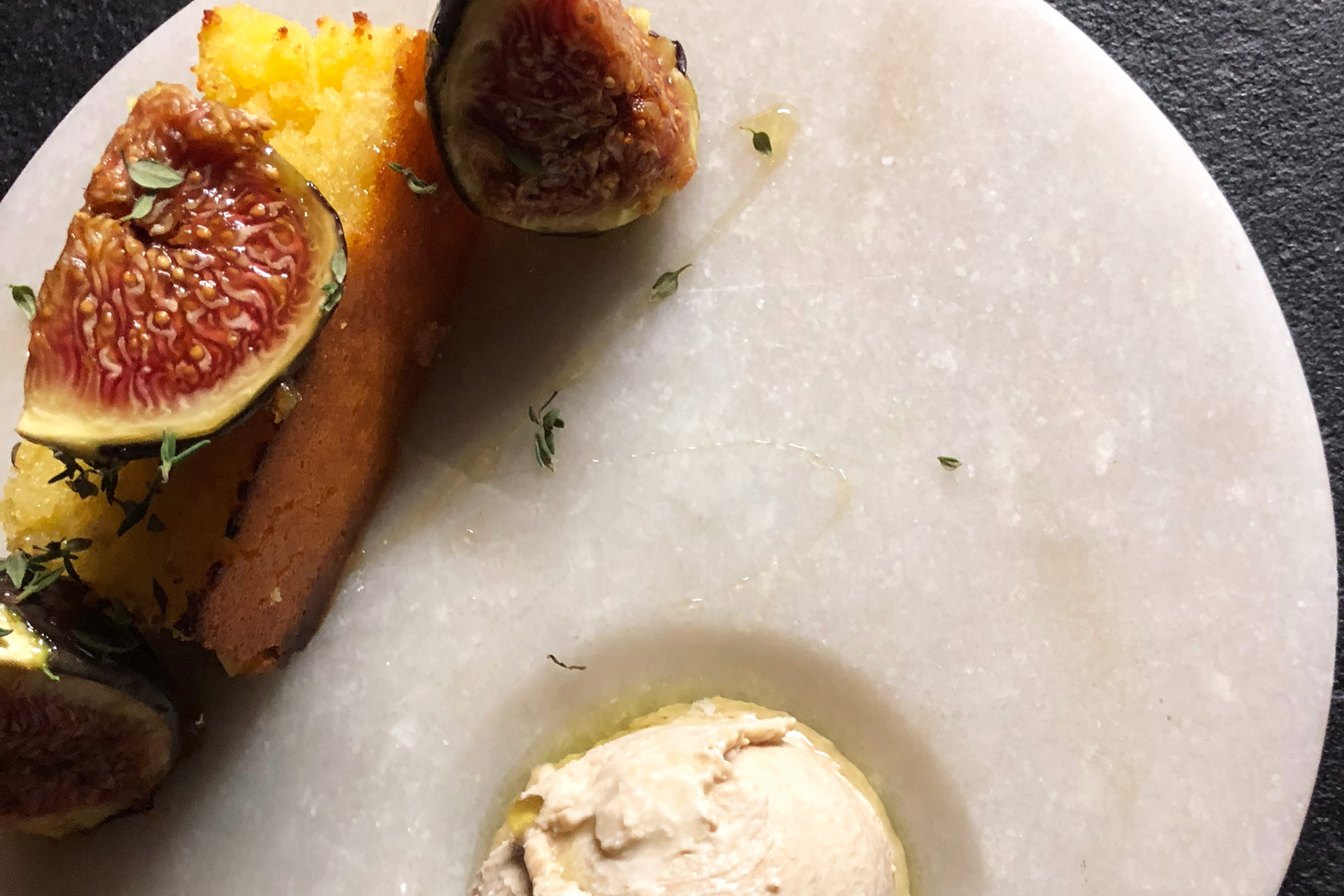 We loved Coal Office, so much that we have already booked to go back with friends. We hope nothing changes when it transitions from “preview” to “full” opening and we highly recommend adding Coal Office to your restaurant wish list, you won’t be disappointed.

The Joys of Dining at Home