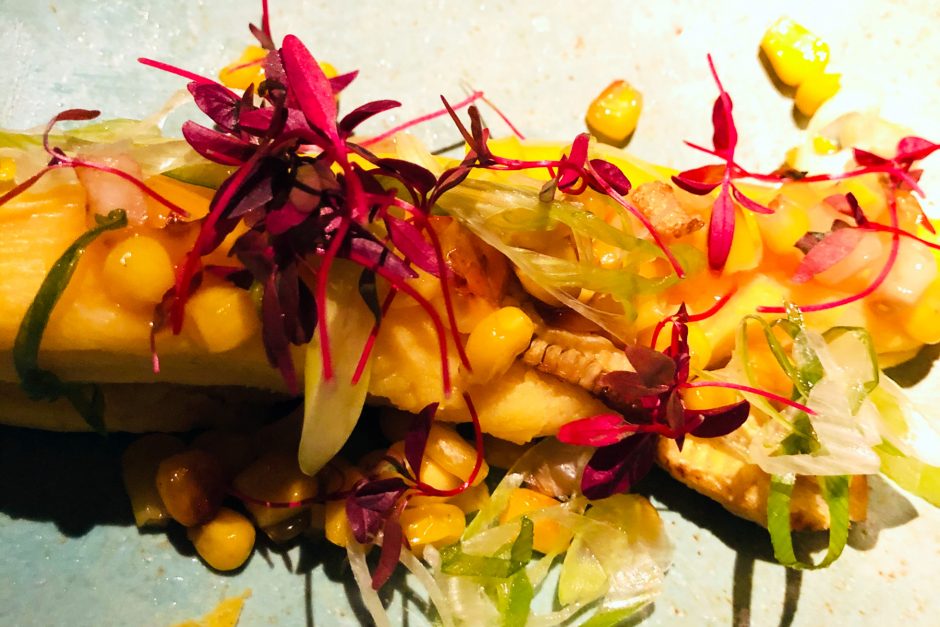 If you find yourself wondering why you’re in a rainforest setting, in the heart of Mayfair, then you’ve probably stumbled into Amazonico restaurant. One of London’s latest restaurant openings, Amazonico is the first outpost of the Madrid celeb hangout of the same name. With no expense spared – not on the location; not on the impeccable staff uniforms and definitely not on the restaurant itself – Amazonico is a huge series of spaces divided creatively (we sat by a waterfall screen of glass jars) and bejewelled in exotic wallpapers, smothered in rich fabrics and draped floor-to-ceiling in flora and fauna. Plush!

Arriving for the dinner sitting, we found ourselves guided from cloakroom to table by a relatively disinterested jumpsuit clad hostess. We were led through a large lounge/casual dining space and bar, past a massive open kitchen and sushi counter, down a walkway into a more formal dining area, past the jazz band, eventually settling at our table in a cleverly divided area that provides table and booth seating. The walk alone makes you wonder whether the stiletto wearing waitresses need to change to flat shoes for food service!

At your table, pause to take in the surroundings, nothing matches but everything coordinates; it’s like the impeccably elegant lovechild of Walt Disney and Donatella Versace. Were Amazonico full of children then you’d think you were at a theme restaurant. But it isn’t, it’s full of the elegant Mayfair “It” crowd (last year they were all at Annabel’s, this year they’ve managed to cross the square). Once you’re drunk on the glamour, time to get drunk on one of Amazonico’s impressive cocktails – they’re awesome and in keeping with the theme they come in array of receptacles; Ell drank out a monkey head whilst Drew sipped from a peacock.

At this stage it all seems very style over substance, but it is a restaurant after all, so let’s turn our attention to the food.

A sharing menu concept (where isn’t these days?) with fusion influences from South American and Asia. The flavours were different, fresh, vibrant and original… which essentially means that beyond the bling and the pizzazz is a fabulous restaurant with top tier cuisine!

The menu is mostly divided between small and large dishes. We say mostly because there’s also a selection of wok dishes, which are somewhere in between, and if you’re smart and plan it correctly, your server (who was excellent) will bring the wok dishes as an in-between course.

For starters we kicked off with the delicious ‘Tequeños’ clay oven chicken rolls, the ‘Ensalada Amazonico’ mango & avocado citrus salad, and the ‘Zapallo y Jicama’ roasted Peruvian pumpkin tacos served in a wafer-thin turnip slice. Ell never thought that his favourite dish (so far) for 2020 would be pumpkin wrapped in turnip, but it was, it really was! We also devoured a portion of the ‘Guacoamole con Erizo’ served with plantain crisps.

For that ‘in-between’ dish we opted for the king prawn ‘Chupe de Camarones’ stew with long rice. We expected more of a stir fry vs a curry (the clue was in the stew wording!) so whilst it was lovely, Ell was the only one at the table that raved about it.

Main course centred around the charcoal grilled meats. The Argentinian ‘Ojo de Bife’ beef rib eye was succulent and delicious, albeit trumped by the stunning ‘Picanton Caipira’ marinated baby chicken with fresh herbs. We nearly had a fight over who was having the last slice! The biggest disappointment of the evening was the ‘Costilla Huacatay’ black mint marinated lamb chops; perfectly cooked but lacking in flavour, most certainly not worth the hefty price tag.

We watched a rather mouth-watering ‘Picanha Rodizio’ Brazilian skewered steak being carried on parade to other tables, presented in a rather theatrical fashion before it was whisked away to be cut and served…one for our next visit we agreed.

The dessert menu was curious. A selection of tropical fruit dishes (including spit roasted pineapple) that had us struggling to pick a favourite. As it was Papa Elldrew’s birthday, desserts were paramount! We think we didn’t order well (maybe due to the second bottle of wine) but we weren’t bowled over by the interesting-sounding-but-ultimately-quite-bland ‘Suspiro’ mango and avocado pavlova, or the equally unmemorable ‘Platano Quemado’ banana flambé.

If you want a fun night out and people watching is your thing, then we’d definitely recommend Amazonico. It’s Mayfair, it’s new, so expect to book well in advance, pay through the nose and be judged by everyone…except Elldrew of course! We were totally sold on the full Amazonico package and we hope it doesn’t get carried away by its own status and mess it up. We’re coming back for the skewered beef and spit roast pineapple for sure.