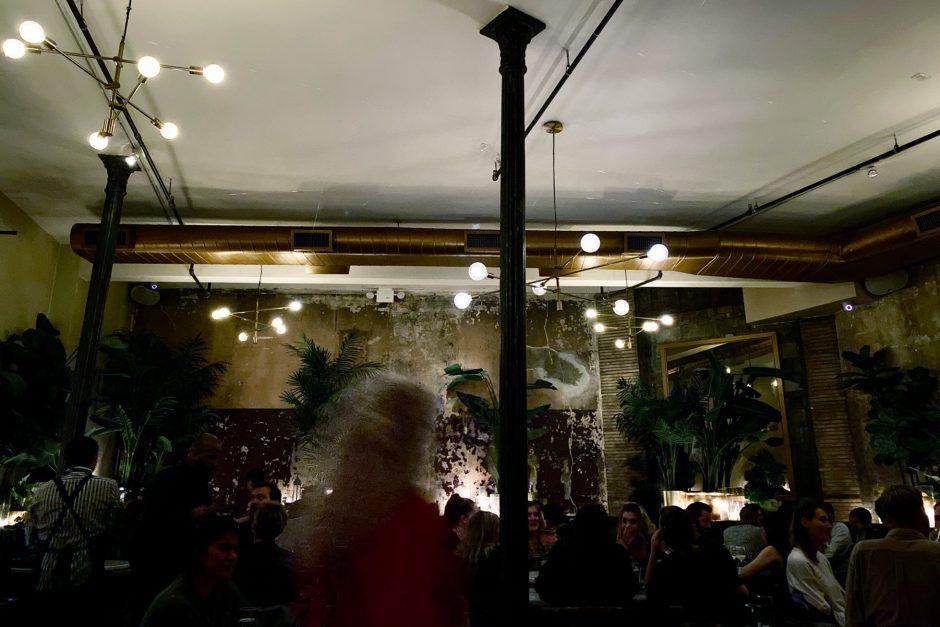 Chinese Tuxedo is a cool, hip, happening Cantonese style restaurant set in a two-story former opera house on Doyers Street in the heart of Chinatown; the venue was once the headquarters for the notorious Tong (gang) wars that took place in the early 1900s. We say hip and cool because as you enter Chinese Tuxedo you are greeted with a very different crowd of diners and staff than our previous night at Tao Downtown; which was far more chic and Uptown in comparison (and, yes, it’s not lost on us that Tao Downtown is Downtown, not Uptown, but this is about the crowd, not the location).

With a pumping bass, drinks flowing from the bar, you can see that the staff love their jobs here…welcoming and unpretentious with a relaxed vibe, we were hopeful for another amazing night in the city that never sleeps.

Chinese Tuxedo’s decor is a juxtaposition to Tao Downtown. Where Tao’s entrance is grand and can’t be missed, Chinese Tuxedo’s is so innocuous we walked past it twice. The reception area at Tao is vast and mysterious; Chinese Tuexdo’s is so understated you’d be forgiven for thinking you were at a cool hair salon. And then there’s the restaurant itself – both Tao and Chinese Tuxedo are down a flight of stairs – whilst Tao is an overwhelming sensory spectacle, Chinese Tuexdo epitomises shabby hipster laid back chic. It has a restored mid-century style that incorporates some modern art, loads of randomly placed indoor plants, a club-ish vibe with ambient lighting and, we are told, the original stripped-down concrete walls.

Another extensive menu serving up a range of small and larger plates, we again relied on our fantastic waiter to guide us with both cocktails and food suggestions. The meal kicked off great with a mouthwatering cocktail, a host of smaller dim sum and signature bites, before we tried our hand at some of the larger meat dishes.

The dim sum were excellent – the five spice pork dumplings were melt-in-the-mouth good and the lamb sang choy bao a refreshing option. Alas, when we got to the larger plates we found the portions huge (US style!) with the sauces and seasoning dominating each dish. Half way through our meal everything began to taste salty and our taste buds started to shut down.

What a shame, we were left slightly disappointed. We wondered should we have choosen some of the lighter sounding dishes, would it have been a better balanced meal?

The word tuxedo is usually associated with sophistication and flair but unfortunately we felt Chinese Tuxedo was a bit off the mark; don’t get us wrong, it has a great vibe but we came expecting Great Gatsby and found more Catcher in the Rye.

It’s cool, it’s chilled, we enjoyed our evening, but it wasn’t the grand New York destination experience we had hoped it to be, and for an Australian-owned restaurant we expected to be wowed by the food. Such a shame for our last night in New York.

The Best Briefs in the World?