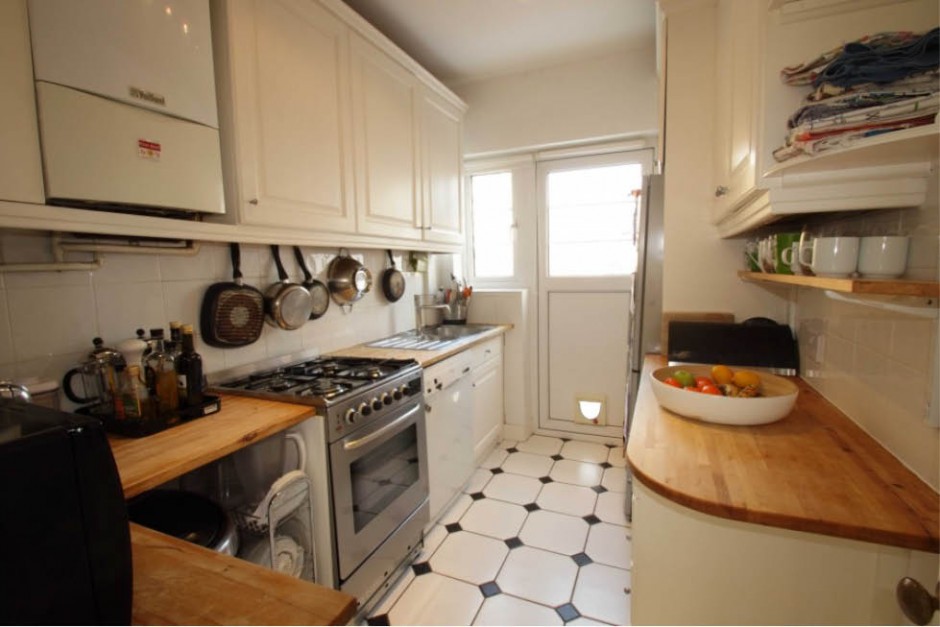 Elldrew hate to say it, but truth be told, after 3 months of decision making, 4 months construction, and another 3 months to do “finishing touches”, we’re a little bit over talking about renovations. For the best part of a year our lives have been dominated by the search for and creation of our ideal home…and we love it! We love coming home every night to the finished result, but it was a labour of love. Nevertheless, not only did we want to show off a little of what we’ve done, hopefully we can provide some helpful handy hints for anyone else embarking on such a project (do ask away if we can be of help with any supplier details, etc). We will start this series with one of our favourite rooms, the kitchen.

Those of you that carefully followed last year’s updates may recall that we originally had a rather tiny, London style, 3m x 2m galley kitchen with doors at either end (one from the hall, the other to the garden). In the early stages of planning there was much debate as to whether we kept the kitchen as a separate room, or knock down the wall and open up into the dining room. There are pro’s and con’s for both approaches; leaving the room as is keeps the disturbance of cooking noises and smells to a minimum but, on the other hand, an open plan kitchen/dining opens up the space and lets the cook mingle with guests when entertaining. The biggest downside of taking down the wall was losing a wall’s worth of storage, so careful planning and use of space was required. But, practicalities aside, this is Elldrew, so the aesthetic also had to be right and there were a few functional items (more on those later) that we simply had to have!

Our poor kitchen designer thus had to balance Elldrew’s precise demands with a small and challenging space, so it’s not surprising that two designer’s never followed-up the “initial consultation” (probably realising we wouldn’t make their lives easy). We think from the first design to placing the order probably took 3 months and goodness knows how many revised plans and drawings. First of all we needed to agree the floor plan. After considering five different ways of moving doorways and walls we ended up with a classic “U” kitchen, with the old doors at both ends being closed off, and the wall to the dining room replaced with an ever so trendy peninsula. We also had the designer add ceiling hung cabinets above the peninsula, higher than the eye line, to retain space and light whilst give us a huge amount of extra cupboards.

One other tiny consideration, as we lived in a conservation area and on the corner of our street, to remove the back door and enclose it with a new external wall would have required permission from the local authorities. The door had to be blocked to maximize space, so a decision was made to permanently secure the door and build in front of it internally (leaving the outside appearance as if a door still remained).

That decision out the way, it was onto the overall style and design. A traditional shaker kitchen was too kitsch and high gloss too modern for the look we wanted (flush doors were chic, but not unique. Pull up doors to space age). After visiting multiple showrooms we rejected all the efficient German engineered kitchens, including the well-known high street brands, and were at the point of unhappily settling for second best when our designer struck upon Mereway Kitchens who’s English Revival range offered the right style without the overdone tweeness of so many on the market.

With the floor plan and frames chosen our designer now needed to slot in all the appliances and cupboards – this was the fun part (not). Design 1 omitted our “must have” Belfast sink. Rejected. Design 2 only had a half sized dishwasher but incorporated our Swedish stacked waste and recycling bin unit. Rejected. Design 3 had the full dishwasher but nowhere for the mini wine fridge. Rejected. Design 4 had a dishwasher and a wine fridge but nowhere for glass storage. Rejected. Fast forward to Design 27 when we finally found a layout that considered how we use the kitchen, plus allowed for all the essential items we wanted to incorporate; wine fridge, double oven, butler sink, spice rack, waste/recycle bins, bookshelf for recipe books and hanging space for aprons and oven gloves. Elldrew cannot tell you how many 3am panics were had during that period, realising that the latest design wasn’t entirely functional (one could not stand at the sink with the dishwasher door open, so said dishwasher needed to be swapped around) or we missed critical storage space for an essential item.

Finally, we got to move onto worktops; Drew wanted wood, Ell refused on hygiene and maintenance grounds. Ell wanted marble; Drew refused based on those unsightly and unsymmetrical veins. We looked at granite but the colours were just wrong. We looked at corian but it was just lifeless. We thought about formica for its variety but rejected it because its formica. Eventually one evening at 9pm our designer called us up, he’d had an idea – a little risqué but he reckoned that if anyone would go with it Elldrew would – slate! Slate? Who’d ever heard of slate worktops we asked? We did a bit of googling and found that slate had indeed been used for hundreds of years and had always been superseded in popularity by other stones, although it is making a comeback. It’s not quite as solid as granite (but still solid enough to chop on), reasonably heatproof and hardly porous, the downside is that it has to be carved from the ground and only in relatively small pieces. That meant they couldn’t guarantee colour consistency for each slab but, then again, that’s the beauty of slate! Elldrew took the risk and went with it.

We did a mash-up when choosing overall style:

Big decisions out of the way the kitchen was ordered (we won’t bore you by repeating the tale of the kitchen fitting (see previous blogs), nor the 17 shops visited to get the right handles (which had to be polished to the correct metallic shine), or the fact that one ton of slate arrived on the back of a van with no one but Ell to unload it)!

It’s rather good to see that all the time spent on the design plans were well worth it, the finish product pretty much mirrored the 3D visuals.

For all it’s efforts – and Elldrew can tell you that it might look small but it seems to be tardis-like – we have heaps of work surface (versatile and easy to maintain), the cupboards seem to take everything, the neutral colours complement the wood flooring and make the room open and airy, and more importantly, we can effortlessly whip up dinner with friends chatting (um drinking more like it!) around the peninsula. Our little kitchen does exactly what we wanted it to do, so persevere and make sure you plan thoroughly to ensure your kitchen is the perfect accompaniment to your home! 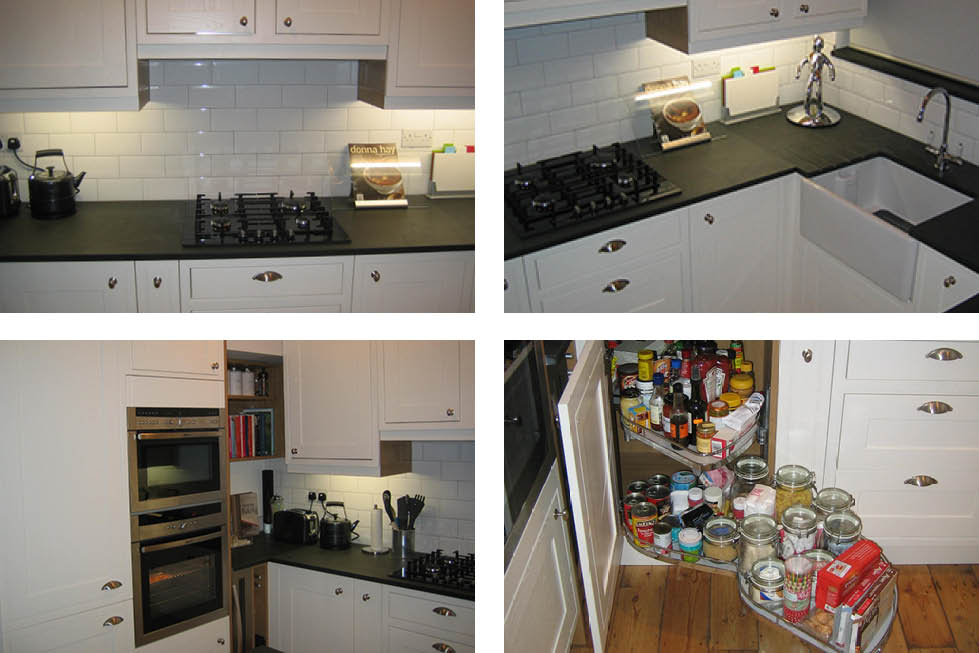 Star Trek: Into The Darkness