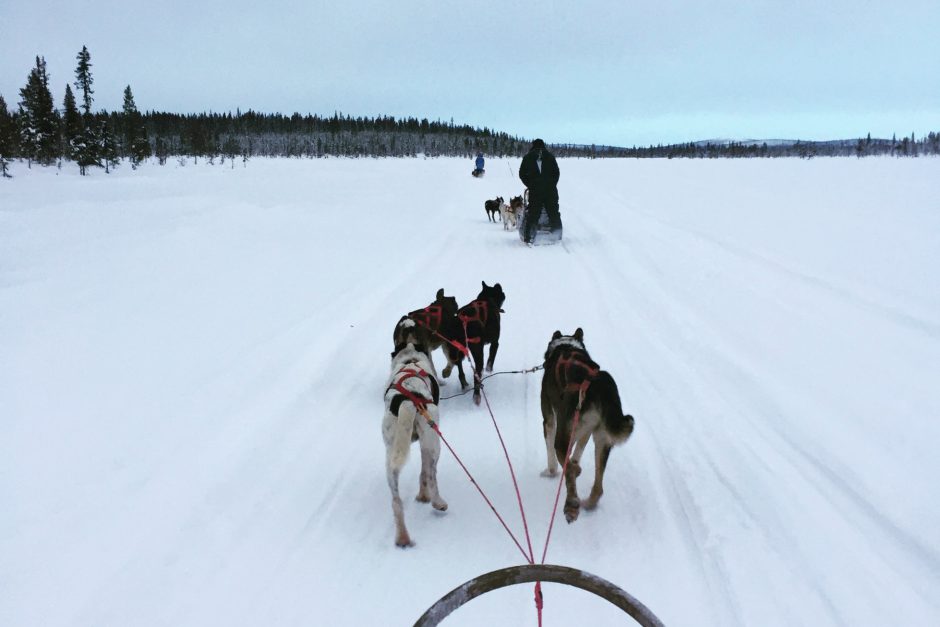 Sleeping on ice/in ice has long been a dream for Elldrew, but the price tag associated with a hotel that melts annually has been somewhat prohibitive, making it a real bucket list item for which we needed a significant occasion. With one of Elldrew entering a new decade, January provided just that occasion and so we boarded a flight to the Arctic Circle (via Stockholm) to experience the wonder of the original ICEHOTEL.

For those of you unaware, the ICEHOTEL is exactly what it says on the tin; a hotel made of ice where one sleeps on a bed of ice in a room carved of ice. But it’s a bit more than that. It’s also the core of a snow-based holiday that’s not about skiing down slopes, but about enjoying the wonder of the arctic tundra. So, let’s start at the beginning in the hope that other passionate adventurers may take inspiration from our travels.

Before we went we did loads of research; there’s multiple ways you can structure an ICEHOTEL holiday although all recommend you spend either the first or last night in a “cold” room, with the rest of the time in a more conventional “warm” room. They also recommend 2-4 days; in our view 2 days would have been rushed so 3 nights was perfect, although that may depend on the excursions you pick.

We flew via Stockholm landing at Jukkasjärvi early afternoon and decided rather than checking into the hotel it would be more fun to go straight on a wilderness adventure. There are tons of different excursions depending on what you fancy – and how energetic you are – but we were (well) advised that the overnight dog sleigh trip is one of the best. You must book it in advance as places are limited and it also comes with another hefty price tag, but for the experience and what is included Elldrew thought it was worth every penny: it was probably the highlight of our trip. 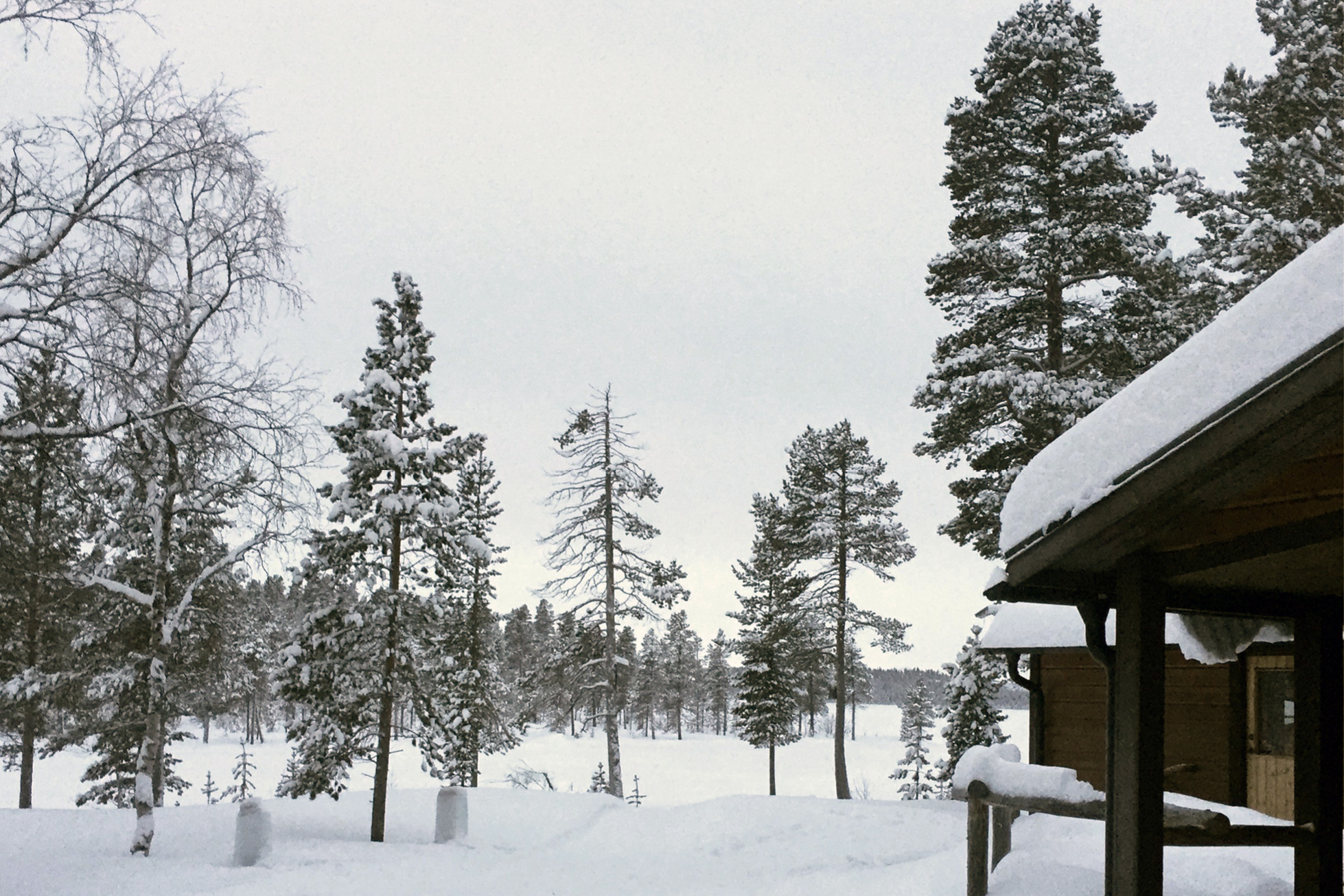 Our adventure began just 1.5 hrs after we had arrived at the hotel reception; which was ample time to have a light lunch, stow our luggage and change into the snowsuit, boots, gloves and balaclava provided. We also managed a quick explore of the grounds to take a few photos before sunset (which is really early). We recommend you listen to the staff – even when you think they’re mad advising that you wear thermal underwear, a woolly jumper, fleece and a warm winter jacket under your heavy snowsuit – we did and we were perfectly toasty.

Huddling under the Narnia-esque lamppost “meeting point” in -10 degree darkness was enough to whet our appetite, conjuring visions of an ‘Ice Queen’ style white sleigh arriving, laden with reindeer skin blankets, driven by a chauffeur led pack of huskies…and so we were a tad confused when a sole guide popped up ushering us onto a wooden tray (laden with reindeer skins) attached to the back of a snowmobile where she quickly explained that this was just for the commute across the frozen lake to the husky compound.

A few bumpy minutes later we pulled up to a greeting of hundreds of huskies howling at us whilst Jacob, our guide for the next 24 hrs, gestured towards two sleds that looked nothing like the regal thrones we had imagined. Then imagine our shock when Jacob pointed out that we were to be our own chauffeurs with each of us driving a dedicated team of four very energetic huskies…thank goodness we hadn’t had a few tipples before we arrived. By now it was pitch black as Jacob strapped on our head torch, showed us the “hard brake” and “soft brake”, pointed vaguely down towards a very steep hill to the lake and assured us the dogs knew where they were going. Our job was to make sure we didn’t fall off (the dogs will leave you behind) or let our dogs get too close or overtake the sled in front (as they could get tangled up in the reins and worst of all, hurt).

So off we went…and by off we mean each foot standing on a single thin piece of wood, that was connected to the back of the sled, speeding down a 30-degree slope pulled by a pack of galloping huskies (do dogs gallop?) who were focused on the excitement of being let out to run with the reward of a warm meal 20 kilometres away.

Elldrew appreciate that this all sounds very brave and James Bond like, and for the first few minutes there was that shot of adrenalin accompanied by a feeling of impending doom as we sped towards nothing more substantial than a frozen lake lit only by the light of our torches. But with each passing kilometre we relaxed a little and were able to get comfortable, feeling how the dogs were running, becoming one with the sled. We might not have got the Narnia sleigh but we certainly felt like we were in Narnia as we glided through the isolated, snow laden fields picking out snowy Christmas trees illuminated by the moon and stars. On the occasional uphill stretch the dogs would slow down enough for us to shout across at each other, and within the hour we were so comfortable and making such a steady pace that we were even able to whip out our phones for the occasional snap or movie (daredevils, we know!). It is however advised to hang on for dear life at all times, especially at night when the trail winds and bends up and down the mountainside…all part of the exhilaration, but we did have a few moments of feeling out of control, if only for a split second.

Now would be a good pause to also address some ‘concerns’ we had read. Yes the dogs do their ‘business’ on the trot, but we had no issues of faeces flying in our face (as we had read). They are all connected to each other so have mastered the art of snow surfing whilst being pulled along. Yes they get thirsty, but they cleverly scoop up the soft snow from the edge of the trail to cool down and refresh. And, if you ‘ride’ the brakes then be prepared for unimpressed glances back from the huskies.

Two hours after setting off we reached the wilderness camp, which was something from a fairy tale. Through the trees we glimpsed a clearing with a handful of wood cabins lit by candles. Whilst Jacob feed and put the dogs to bed we were greeted and asked to sit around a large roaring fire pit, covered in reindeer hide, as we sipped on hot lingonberry juice, gleaming, as snowflakes gently feel around us. We were privileged because that night it was to be just the two of us, so the camp felt particularly quiet, isolated and magical. We were given a quick tour of the camp and left in our cabin to unpack whilst they heated the sauna and prepared drinks and snacks. As you may have inferred, next stop was a warming sauna – and we will interject here to mention that whilst the setting was rural the facilities were as close to 5-star as you may get; spotless and flawless. Theoretically this is one step away from glamping (with purpose-built cabins and a separate bathroom area that you have to run to in the snow) but that’s merely a minor inconvenience, not a point to complain about. Even if the camp was fully occupied the warming bathrooms and separate showers, accessible 24 hrs, were exceptionally private (and oddly welcoming) with all the modern cons. 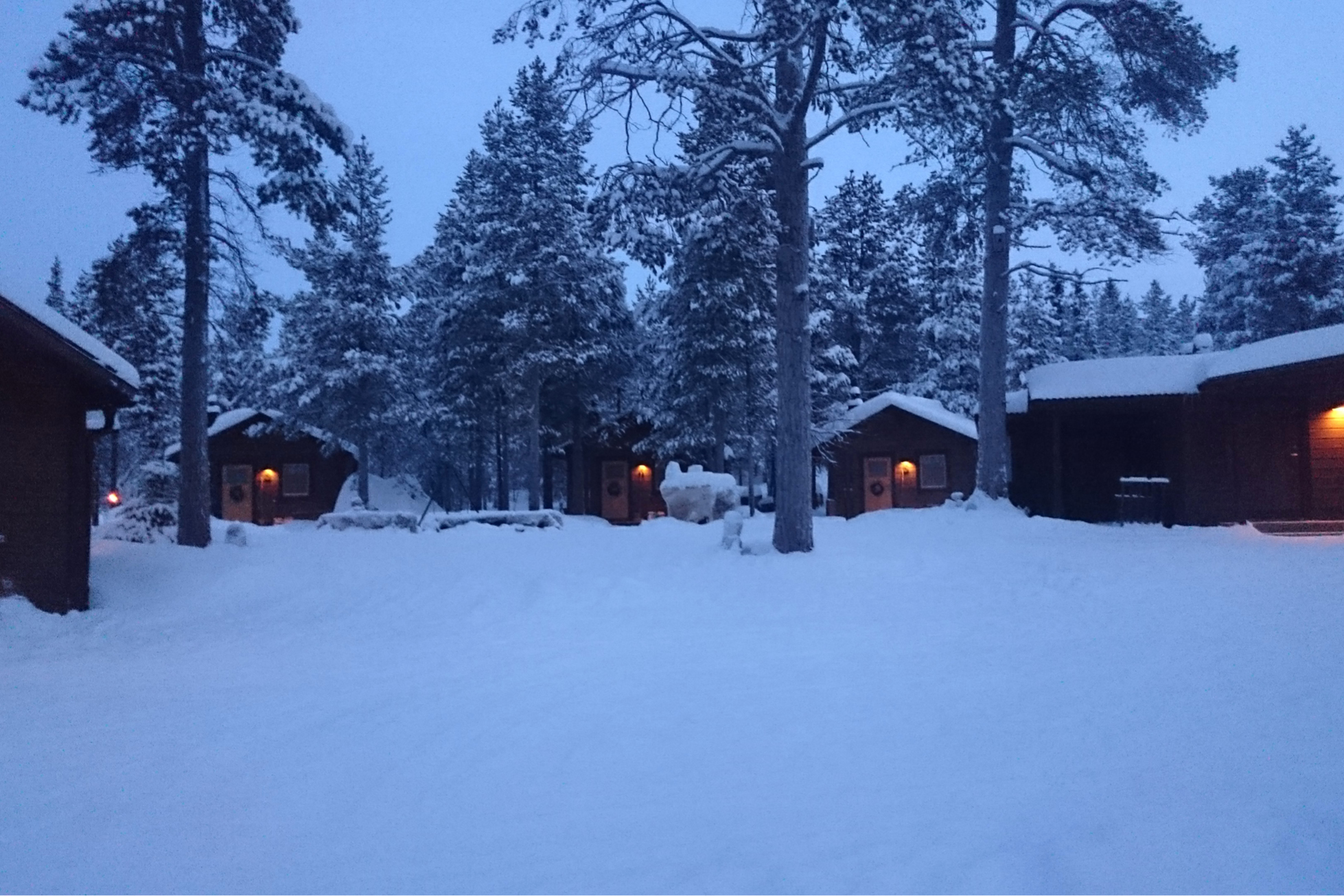 Having thawed and changed into comfier clothes we toasted birthdays with a bottle of champagne chilled by the snow – who needs ice cubes in the arctic? We’d add here that the ICEHOTEL were slightly misinformed, advising us to only travel with the bare minimum (we thought we could only take what we could carry on our back) but there was in fact ample room on the sleighs and in the cabin for a small piece of holdall luggage which sits zipped up in the front of your sled. It’s extra weight for the dogs to pull but a comfy tracksuit, PJs, a change of underwear for the next day and basic toiletries are acceptable. 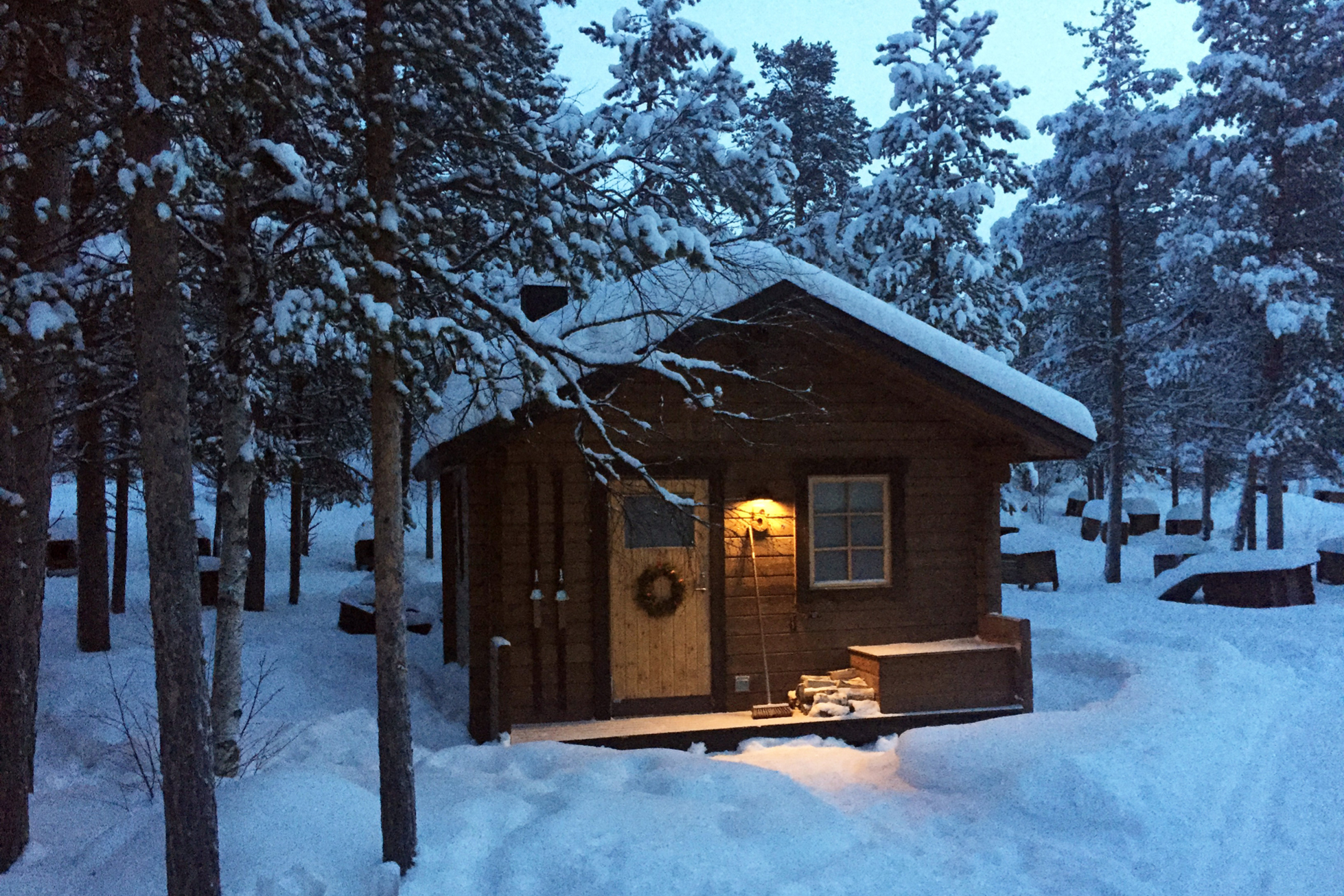 At an agreed time we made our way to the main lodge for dinner where we relaxed on the welcoming sofas and chatted with the staff. We then moved to a huge trestle table lit by candles and firelight, were a setting for two had been laid to one end (we felt like lords from Game of Thrones). Given our remoteness we were amazed at the quality of the meal served. We were asked if we had any food allergies, and possibly if more people were staying the may have provided a menu (we can’t confirm) but with the two of us we were advised what our 3-course meal would be (a meal of local Swedish fare and specialities) and whilst we had a niggling worry we wouldn’t enjoy it, as there wasn’t a dish we would have ordered had we had the choice, it was probably one of the best meals we enjoyed on the trip. That’s a real compliment as we were most certainly taken out of our cuisine comfort zone!

After a relaxing and memorable evening by candlelight we made our way back to our cabin, with just the moonlight to guide. Our cabin had some comfortable chairs, a side table, a warming fire and four bunk beds. We eventually curled up in our bunks and in the absolute silence of the great outdoors we slept long and soundly (with only an exhilarating 3am dash to the bathroom a few cabins away). 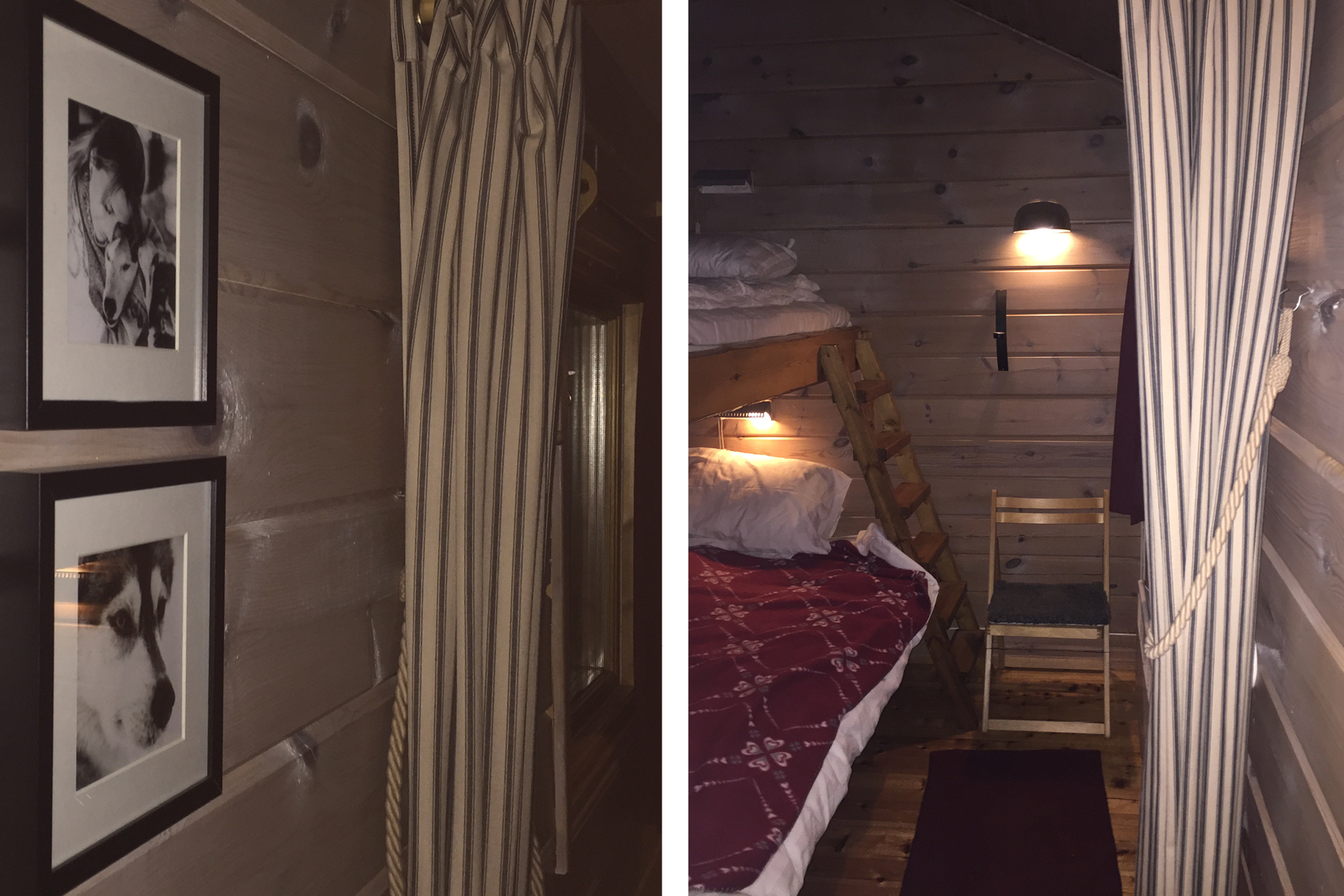 The following morning, after what has to be one of the best sleeps ever, we enjoyed a delicious continental style buffet breakfast before we packed, took plenty of photos, suited up and prepared for our return journey back. This time it was daylight, we were confident enough sleigh drivers, so we pushed off making our way back for what has to be one of the most spectacular snow journeys. Time certainly flies when you’re having fun, so before we knew it we were back and wishing we could do it all again. The arctic wilderness, even with a quick stop to watch some local moose, was simply jaw dropping. 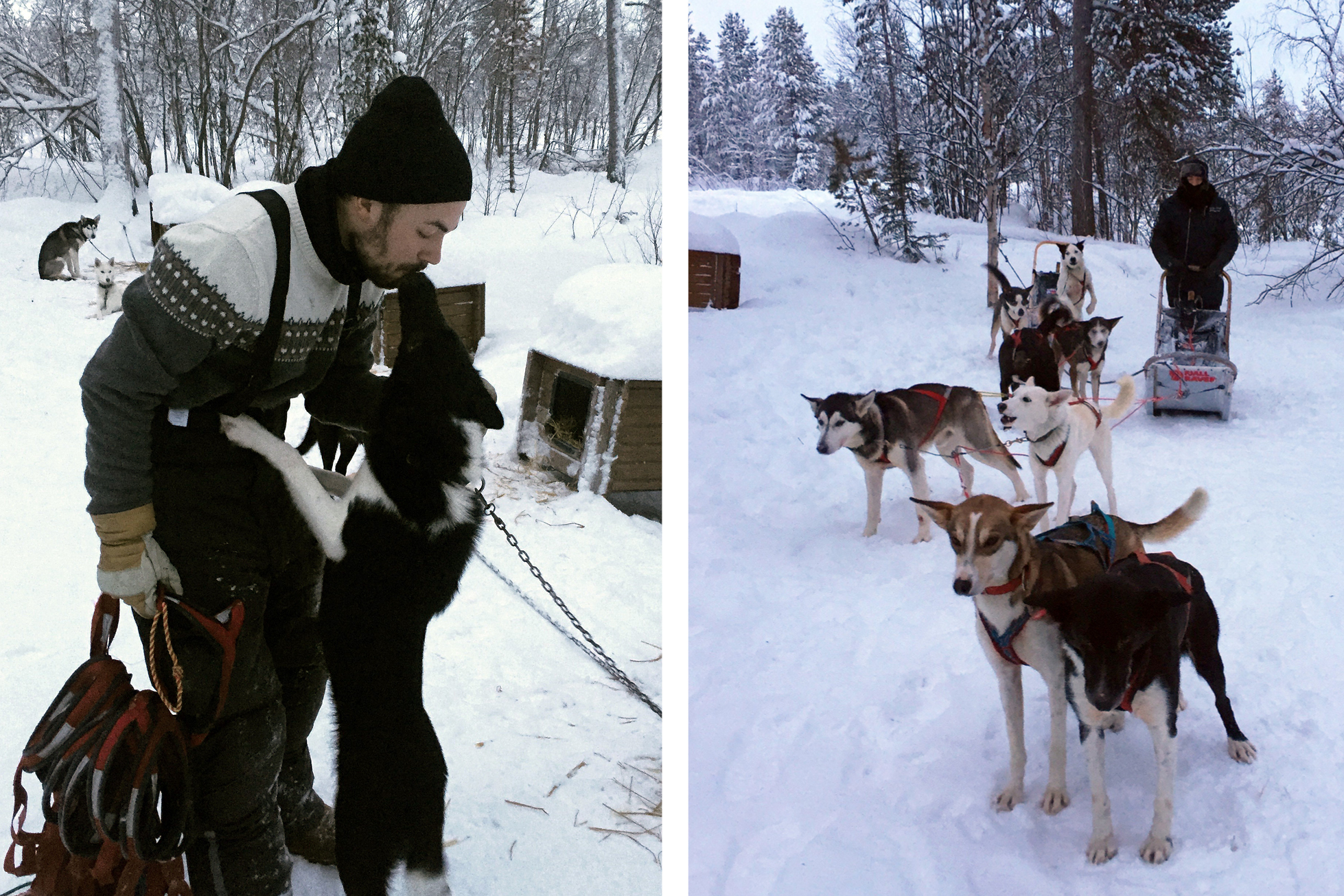 We have to say a huge thanks to everyone at Fjellborg Arctic Journeys. The service provided was 1st class and you can see how happy their huskies are from the care and love they receive.

Next blog we explore the actual ICEHOTEL.