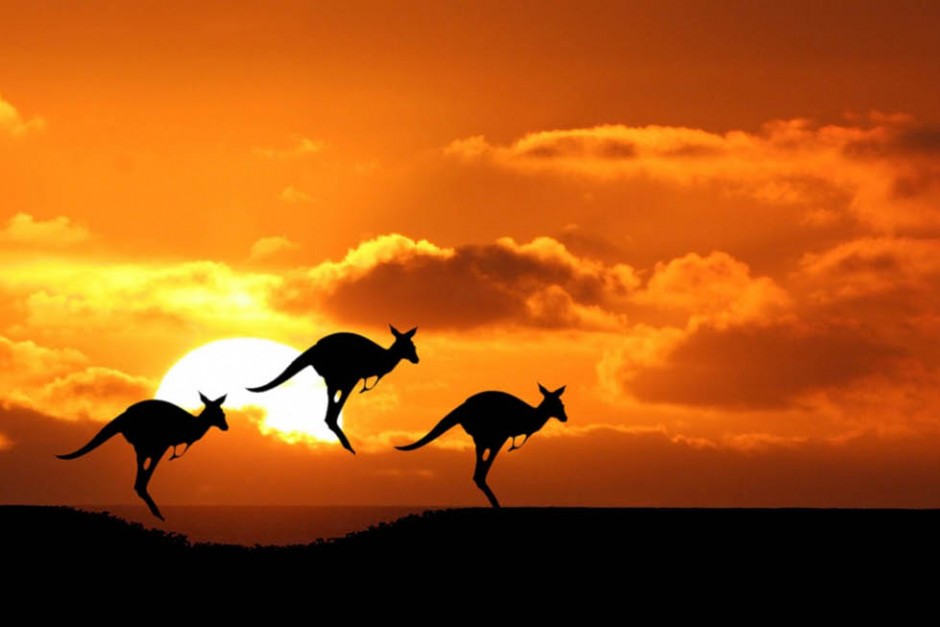 Australia. It’s a very big country, isolated in the middle of a big ocean, with lots of big empty spaces, so it’s not somewhere you’d expect to have size issues. However on a recent jaunt ‘Down Under’ Elldrew discovered that, in fact, the truth is quite the opposite – amongst the marsupials, wonders of the outback and beauty of Sydney Harbour, Australia has a lesser known series of tourist sites collectively referred to as the “Big Things“. Not wonders of nature, nor feats of engineering, these ‘Big Things’ are a random mix of oversized fibreglass objects varying from the ‘Big Mosquito’ to the ‘Big Oyster’ with detours via the ‘Big Didgeridoo’, ‘Big Potato’ and even the ‘Big Poo’. It seems that they come and go and although there is no formal count, estimates suggest there are around 150 ‘Big Things’ scattered across Oz. Some are “official” ‘Big Things’ others are subject to the viewer’s perspective, and not wanting our readers to miss out Elldrew bravely battled the bush to seek out a handful of these official and unofficial ‘Big Things’.

Our tour begins in Sydney, famous for its ‘Big Harbour Bridge’, and where (just down the road from the ‘Big Bridge’) we stumbled upon a ‘Big Egg in a Big Nest’ perched upon a ‘Big Pole’. We don’t know why it’s their and we don’t think it’s an “official” ‘Big Thing’ but we felt it was big enough to be mentioned here.

Leaving Sydney by highway we are quickly astonished by some rather large Golden Arches and a particularly massive Bucket of Chicken, but we are reliably informed that in a big flat country these local fast food chain landmarks aren’t unique. Shame.

Our tour takes us over the Blue Mountains which are impressively big and a little bit blue, but being wonders of nature don’t qualify for this blog, although they may well be worthy of their own blog at a future date. However driving through them one does pass the very pretty town of Leura. We loved it there and could write endlessly about it but that’s not what you’re here for today; today’s about ‘Big Things’ and alas Leura has none – although it does have the appropriately named “Megalong Street” which, in keeping with our excessive use of superlatives in this blog, therefore deserves a mention. And, in case you wondered, no, “Megalong Street” isn’t especially long. Leura is, after all, only a small village. 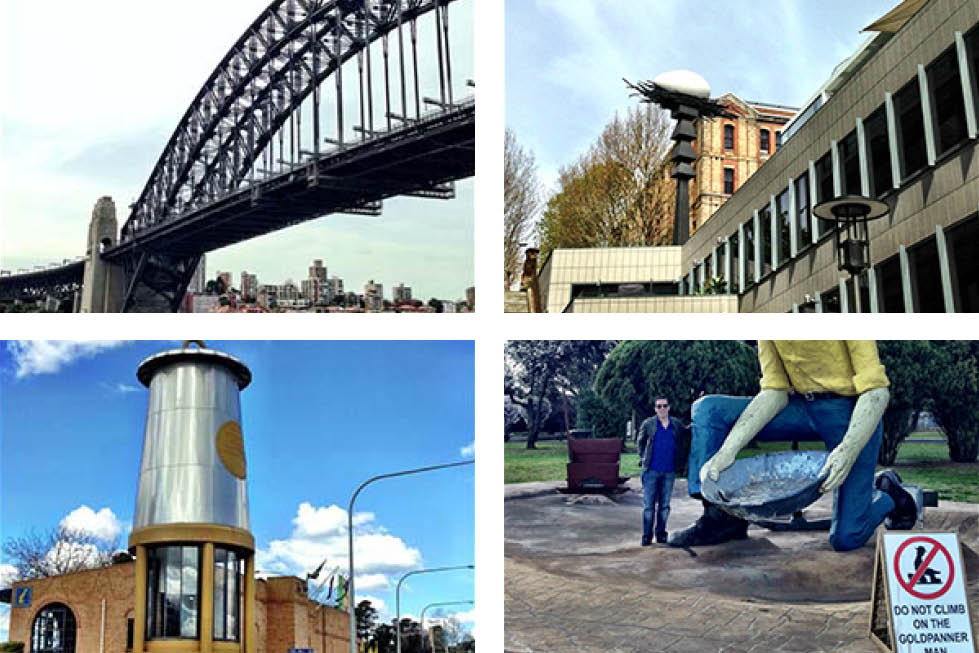 Coming down the other side of the Blue Mountains we pass through the industrial urbanisation of Lithgow where, right by the highway, we saw our first “official” ‘Big Thing’ – the ‘Big Miner’s Lamp’. Now this is big! Big enough to get excited about and even with a big fake flame to usher in the visitors, it doubles up as Lithgow’s Tourist Information Centre. Elldrew positively bounced out the car for a photo opportunity and rushed into the Information Centre with gleeful looks on our faces. “Are we in ‘Big Thing’ county?” we ask the miserable looking tourist information staff, “What other ‘Big Things’ are near here. Do you have a map?”. Blank expressions greet us and so we gesture to the ‘Big Lamp’ that we’re standing in. “Oh” the unenthusiastic staff reply. They glance at each other blankly. “I think there’s a ‘Big Trout’ in Oberon” one offers, “and a ‘Big Merino’ in Goulburn” suggests another. I check the map; neither is on our route so we thank the uninformative staff and pile back in our car. 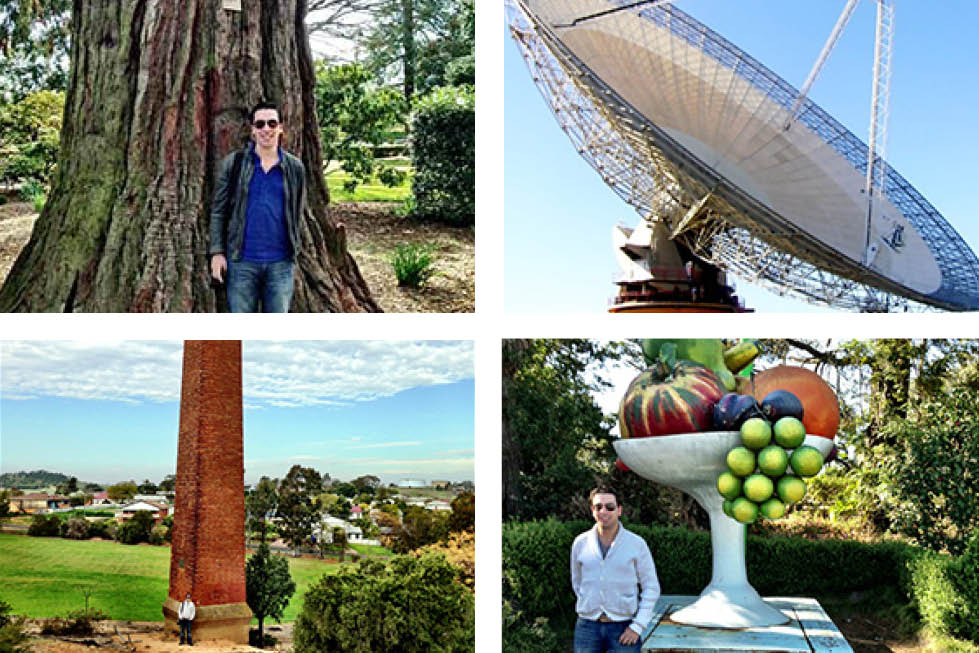 Next stop for us should be Parkes, home of the ‘Big Dish’ (more on that later) and, alas, our research suggests is the last ‘Big Thing’ on this leg of our journey. We stop for some fresh air in Orange with the ulterior motive of looking for a ‘Big Orange’ (why, we ask, wouldn’t a town called Orange have a ‘Big Orange’?). There isn’t one but we do spot a ‘Big Tree’. This actually is a wonder of nature but in keeping with Australia’s size issues they apparently feel the need to even label their tree’s by size, alas the plague said ‘Big Tree’!

Finally, we make it to Parkes and there on the horizon is the ‘Big Dish’. Unlike most of the other ‘Big Things’, the ‘Big Dish’ is functional as well as decorative. It is actually the biggest radio telescope in the Southern Hemisphere, famous for beaming to us Neil Armstrong’s moon landing “…big step for mankind…blah” (apologies for the shameless excuse to drop in a famous “Big” quote). Parkes is also the setting for the movie “The Dish”, which unsurprisingly is about the ‘Big Dish’. This is by far the most impressive ‘Big Thing’ we have seen so far and so we take time out for lunch in the ‘Big Dish’s’ award winning coffee shop where we have a disappointingly ordinary sized club sandwich. On our way back into town we spot a rather tall chimney, so had to stop and take a pic as surely this is a ‘Big Chimney’?

Parkes is also known for its ‘Big Elvis’ festival. Unfortunately we’re here at the wrong time of the year to see the world’s biggest gathering of Elvis impersonators (big enough to make it into the Guinness Book of World Records though). We do however spend an hour wandering around “The Kings Castle” – a collection of Elvis’ personal artefacts owned by the former children’s television “Yellow Wiggle”. This collection is by far the greatest exhibition of genuine Elvis artefacts seen in Australia and the largest in the Southern Hemisphere! We stuck with the word largest as it wasn’t that big!

Alas, with only a short space of time for our ‘Big Things’ tour we don’t have a chance to continue up the coast to see the ‘Big Guitar’ at Tamworth, or the ‘Big Banana’ and its sister attraction the ‘Big Bunch of Bananas’ at Coffs Harbour. Fortunately we can take a different route back to Sydney via Bilpin and it’s ‘Big Fruit Bowl’. With so many ginormous pieces of fruit in an over-sized bowl we feel we saw the best of the rest anyway and settled back to enjoy the remainder of our trip, content and having quenched our desire for Bigness!