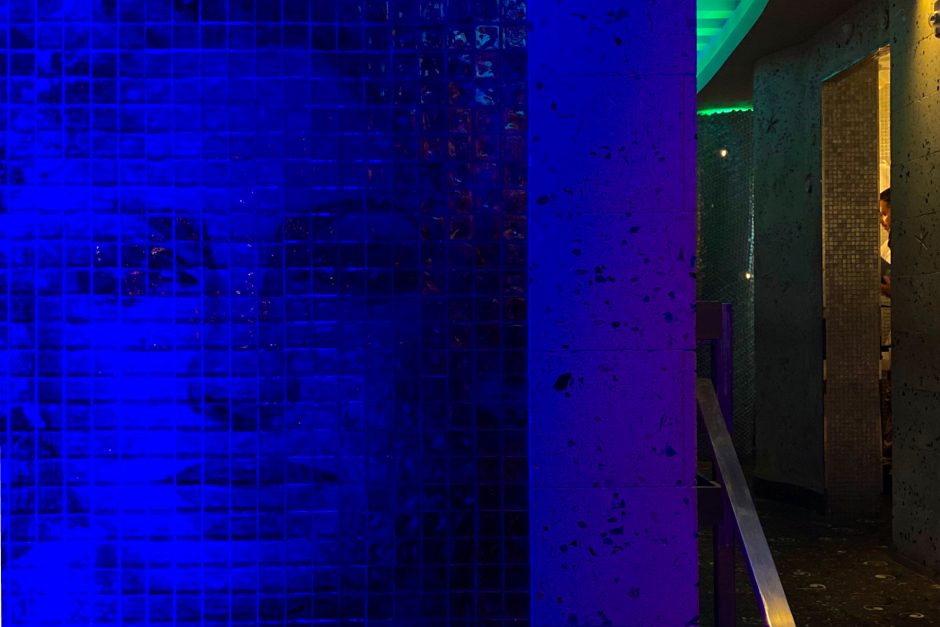 For our last night in busy South Beach, without a prearranged booking, thumbing through the local restaurant guide, we fell upon Gloria Estefan’s South Beach flagship – Larios on the Beach – and thought why not, who doesn’t love a bit of Gloria? Slightly apprehensive that we could call and get a table so easily for the same evening, we didn’t have great expectations, at best it would be a giggle, at worst…well it couldn’t be worse than our Prime 112 experience the previous night, and Larios has live entertainment (we wondered if Gloria was the performance?) so off we went.

We were pleasantly relieved to arrive to a very busy restaurant, the outside terrace was full so when we were asked if we preferred indoor or outdoor seating, in unison requesting “outdoor”, we were told there might be a bit of a wait so we were ushered inside to the bar to order a cocktail. We loved the mosiac of Gloria that adorns the wall between the bar and indoor dining area. With Mojito’s barely in hand we were collected and shown to a prime table on the pavement, right in front of the live band. So far so good.

Larios on the Beach’s menu is an assortment of Cuban classics – a tribute to Gloria’s grandmother – and with so many unfamiliar choices we decided it would be best to start with the Estefan Kitchen Combo sharing platter, our waiter telling us it was a showcase of their best bites.

The starters themselves were Miami sized, consistent with the meals we’d had elsewhere. We liked the colours of Cuba that shone off the plate and boy was it yum! Comforting ham and chicken croquettes (better than some we’d had in Spain), interesting Maduros (bacon wrapped plantain), crispy pork bites, black bean dip, plantain chips and their mouth-watering Papas Rellenas (breaded stuffed potatoes wrapped around an olive). Each taste was a new flavour sensation.

Ell’s eyes were clearly bigger than his stomach as he followed-up with a main course tasting platter of the Estefan’s favourite dishes; Lechon Asado (24 hour marinated roast pork), Ropa Vieja (slow cooked shredded beef) and Caca Frita (seared marinated steak). Drew was less glutinous choosing just a portion of the grilled baby back ribs in a sweet & spicy sauce. But we both won; Ell struggled to decide which was his favourite dish – he didn’t finish his main but thought the shredded beef just nudged into the lead – Drew, likewise, couldn’t clear his plate but would happily have gone back the following night, the ribs were that good.

The only negative was the speed of the food. Our mains arrived before we’d finished the starters – but that was very American and not our choice…it made the meal feel rushed – but we can see why, when Larios on the Beach has a prime spot on a busy tourist strip, they need to accommodate for other patrons. On the other hand, we had dawdled over the starter because Ms Estefan herself had made an appearance and we were briefly star struck! Star struck enough that we didn’t even think to take photos of our mains.

There was no way we could even consider dessert, we were so full, but we lingered for a while longer, taking in the live music (which was great fun, but no Gloria) and the sights & sounds of Miami beach (a cabaret in itself), all washed down with a bottle of the Estefan Kitchen branded Pinot Grigio (when in Gloria’s restaurant, with Gloria, to drink anything else would have felt disloyal).

We had an unexpectedly great evening at Larios on the Beach. The biggest disappointment was that we were flying out the following morning so we couldn’t take our leftovers back to the hotel, but we would highly recommend this restaurant, it was one to “Turn The Beat Around” on our Miami dining experience (sorry, couldn’t resist throwing in one of Gloria’s hits).

Two other restaurants worth noting were:

Naked Taco, which provided a great selection of Mexican food and cocktails (the Margaritas were delicious). Good quality food, good service with an upbeat vibe…it reminded us of a Mexican-themed Hard Rock Cafe. But expect to pay tourist prices, we had better value food elsewhere.

Hosteria Romana, located on Espanola Way – a quaint pedestrian-only thoroughfare lined with quirky shops, galleries and restaurants/cafes – we loved the traditional Italian menu at Hosteria Romana. Fantastic service, the food was authentic utilising fresh ingredients, with an extensive wine list and the perfect spot for al fresco dining to people watch and escape the heat at lunch. Highly recommended.

Tied up with Orlebar Brown