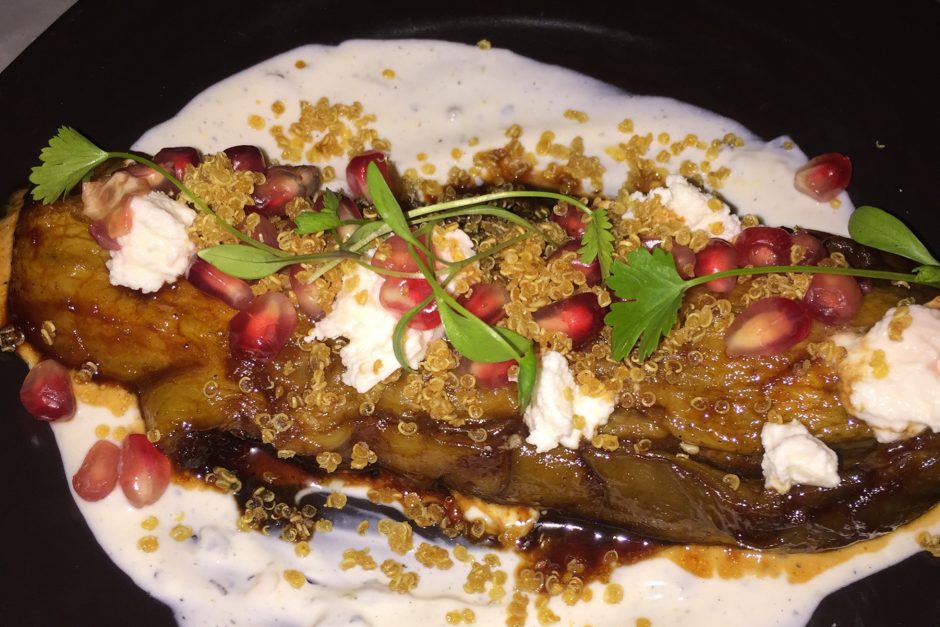 A relative newcomer to the London restaurant scene, we’d heard positive buzz about Foley’s and were itching to try it. The venue looked great and the food sounded delicious. Since eating here we have learnt it started as a ‘tasting kitchen’ pop-up with head chef Mitz Vora (former Sous chef at The Palomar) heading up it’s permanent residency in Fitzrovia. We are not sure why we haven’t been to The Palomar before (we’ve talked about it many times), but when reviewing both website’s we had to admit there is a scary resemblance across concept, décor and dishes. Not a negative, more of an observation, and to be honest we possibly don’t need to rush to The Palomar now we’ve eaten at Foley’s?

A fun and enthusiastic crew who seated us in a four-seater booth towards the back of the restaurant greeted us. We all remarked how small the restaurant was, only to learn via a trip to the toilet that there was also a separate dining area in the basement where the kitchen is; more bar style open kitchen seating with some alcove tables, but it was rammed for a private function so we couldn’t really scope the space.

Let’s just get this rant out-of-the-way before we talk about the food. Why are so many venues currently fixated with dimly lit mood lighting? As our food came out, representing a plate of brown slush, it wasn’t until we actually turned our flash on to get some photos that we were amazed by the colours and presentation of each dish. Foley’s, if you’re going to serve dishes packed with colour and flavour let the guests at least have the opportunity to see and drool over them…it’s all part of the dining experience. Our table viewed each dish via our phone before tucking in (possibly a new concept in dining?) but seriously, if we wanted to eat in the dark we would sit at home with the lights off eating takeaway pizza, or head down to Dans le Noir restaurant! 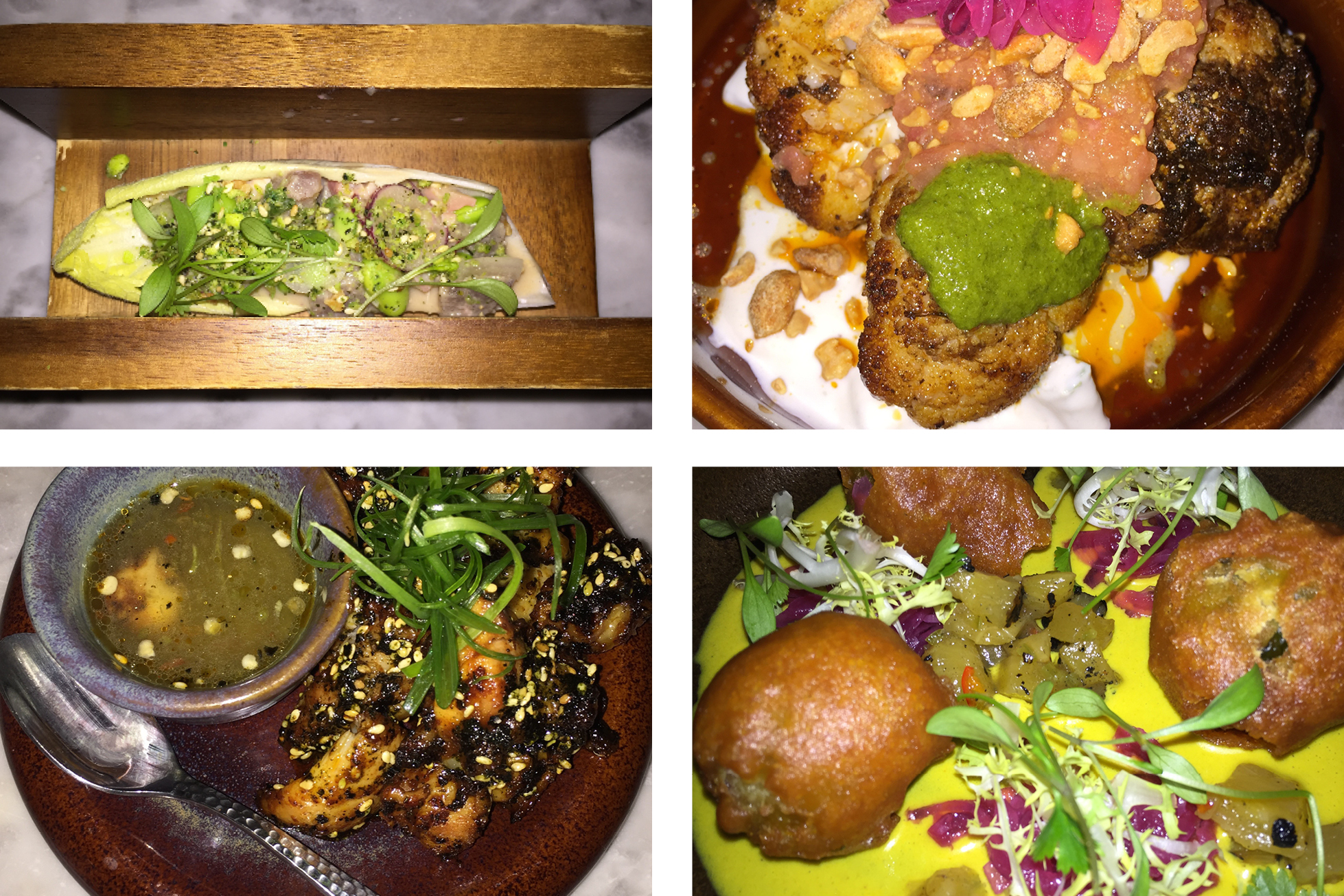 OK let’s get on with the food. A varied menu of tasting dishes with influences from the Americas to south-eastern Asia and the Middle East, we were advised to order around three dishes per person…so with four of us dining we pretty much had one of each of the 15 dishes on the menu.

We tried each dish from the ‘Meat’ selection and it was hard to choose a favourite. We think the Cornflake Crusted Popcorn Chicken (with pickled shimeji, corn, endive and chorizo (we asked for the chorizo to be removed to accommodate dietry requirements)) or the Sticky Beef (with daikon cucumber som tam, avo & kaffir lime puree, crispy shallots and peanuts) possibly took our fancy the most. From the ‘From the Sea’ menu we tried the Nori Wrapped Tuna (compressed nashi pear, shitake, edamame, seaweed, yuzu mayo and tapioca) and the Grilled Octopus (black sesame mayo, spicy port mince, bok choy and house-made sriracha). Again, great flavours. All dishes are small but by the end of the meal we were full. 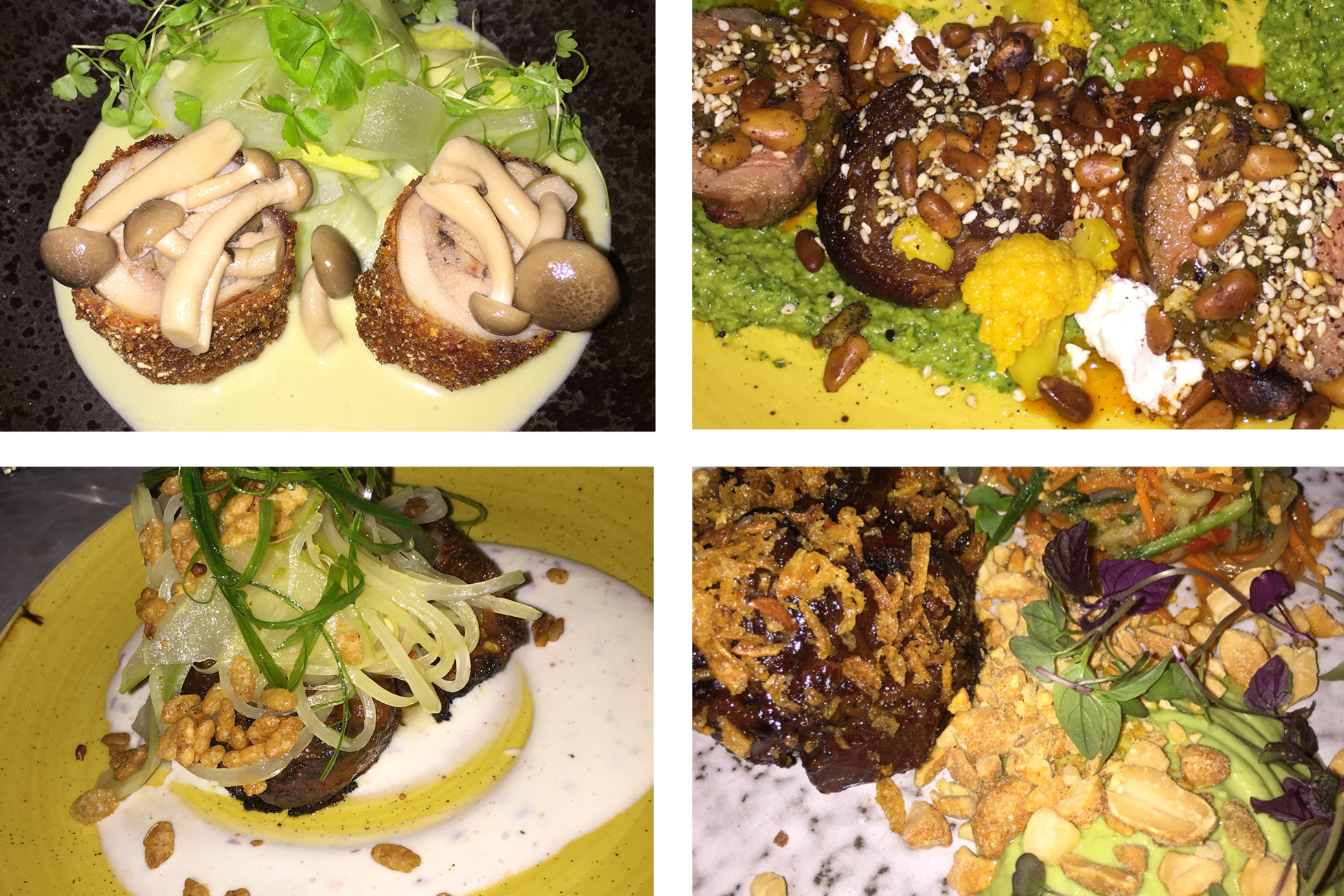 Overall verdict: it was a fun dining experience, the staff were great and the food provided a lovely selection of flavours (wont need to eat another peanut for a good 6 months though) and it’s the perfect spot for drinks and a noisy catch-up with friends. A few grumbles from our table re the lighting and dishes having very similar flavour undertones, but enjoyed all the same and in the sobering light of day, not sure why we felt inclined to pay the oddly listed six-pack of beer fee for the kitchen staff…can’t imagine how the staff make it in each day for work if everyone added that to their bill (did we get charged 12.5% service on that item…I hope not…where’s the receipt)?