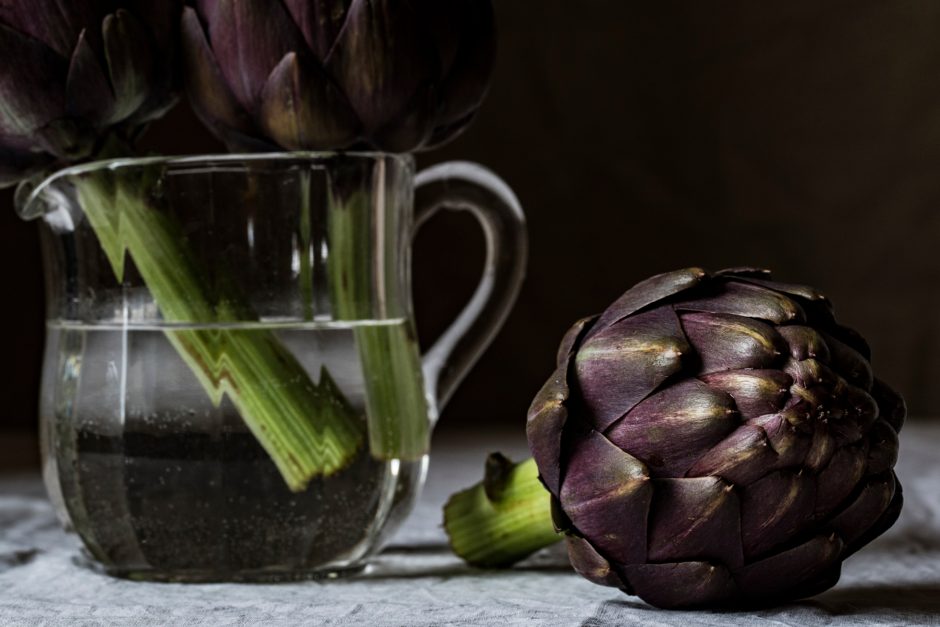 Once, a long time ago in an era far different from this one, ground floor apartment block space was given over to self-contained restaurants aimed at locals and residents. Nowadays this valuable piece of real estate is converted into either gyms or swimming pools, promoting a healthy wellbeing to attract potential buyers. But, in the darkest wilds of St John’s Wood in northwest London, in a rather unremarkable building, down a rather ordinary street, away from any other commercial property, you’ll find possibly the last remaining example of apartment restaurants; Oslo Court. A legend in itself, this final bastion from an era that brought us Fawlty Towers, Carry-On movies and Fanny Cradock, Oslo Court has survived the testament of time and even comes with a booking waitlist to rival any trendy London restaurant. It’s much like Marmite – you’ll either love it or hate it – but kudos to this establishment for its persistence, and dare we say, preservation.

Elldrew were lucky enough to join two old friends for a meal here; although by “lucky” we mean we were the fortunate recipients of a longstanding guest who’s table was made available last minute, due to his, err, passing. Like many of Oslo Court’s staple clientele (thanks to the miracle of modern medicine), time has stood still; carpets, curtains, wallpaper, even the decoration on the china is the matching tone of salmon pink last scene at your cousins wedding circa 1980. “I didn’t realise they still made candles in this colour” remarked Drew on entering the restaurant; “but at least they are supporting the lost art of napkin folding” commented Ell. 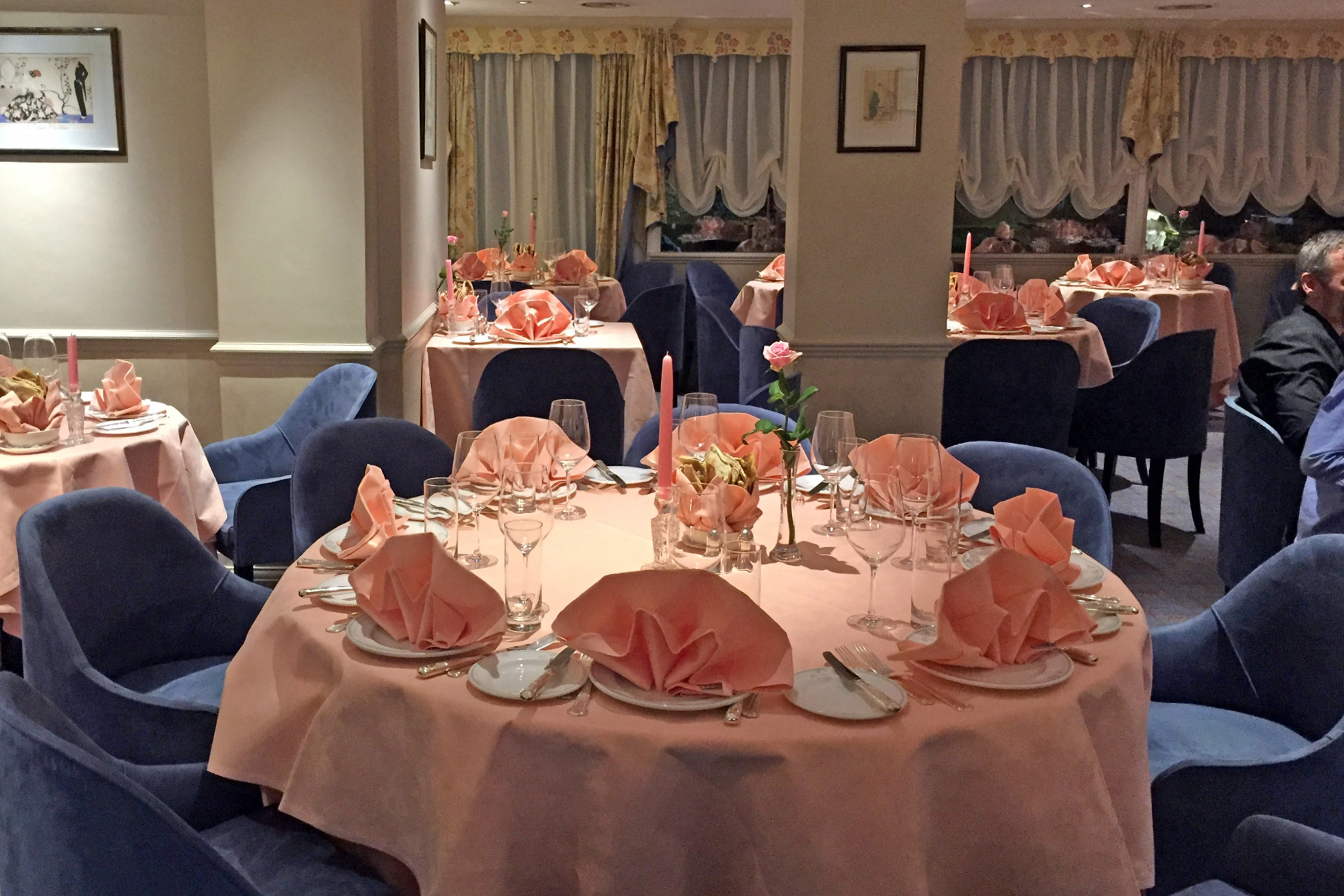 Once you’re over the initial shock of the décor and escorted to your table, in a nod to tradition, men are given a menu with a tassle and prices; ladies have no tassle and no price. This is somewhat superfluous given the set price of £45.50 for 3 courses, but there are little extra charges (£1.50 for additional veg, for example) and in the bygone days of male chivalry, we think this is a lovely gesture when taking a lady to dinner. Regardless to say it provided our table with added entertainment as the maître d’ stumbled over who to give the additional female menu to at a table of three men and one woman.

The menu is divided into hot and cold starters, then a choice of mains including a selection of 70’s and 80’s classics; such as pink grapefruit grilled with brown sugar (we were amused that at Oslo Court it is perfectly acceptable to ruin healthy fruit with unhealthy sugar), Steak Diane and Salmon en Croute. The list of daily specials seemed longer than the printed menu and, allegedly, we were told the same “specials” had made an appearance since Oslo Court opened its doors in 1982. We were offered warm rolls, served with silver tongs, to accompany the basket of Melba toast and generous bowl of crudités with aioli already on the table. Around this point in the evening Elldrew were informed that we could take our time; the two-hour sitting restriction had been lifted (we didn’t dare ask what happened to the later booking for fear of being tarred as the ‘Angels of Death’). 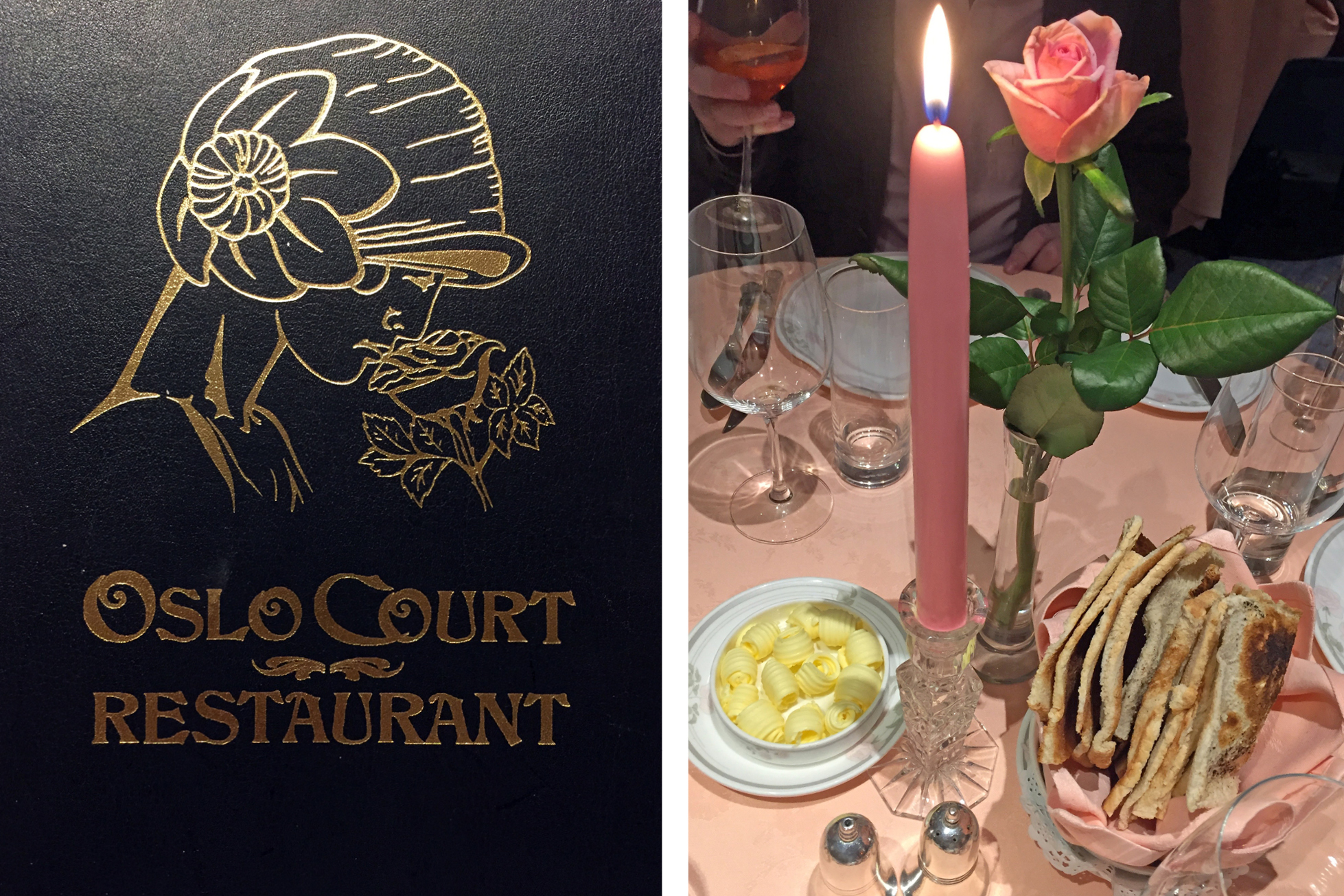 Ell started with the Melon and Parma Ham, which came with a generous portion of ham. Drew enjoyed the Avocado Prawns served, naturally, with a Marie Rose sauce. Our friends enjoyed the Coquille St. Jacques (in the shell with prawns) and the Artichoke special (served warm, whole with a tangy side dressing). The only grumble from the table was about the portion sizes, we were worried how we were going to fit in the mains and dessert! 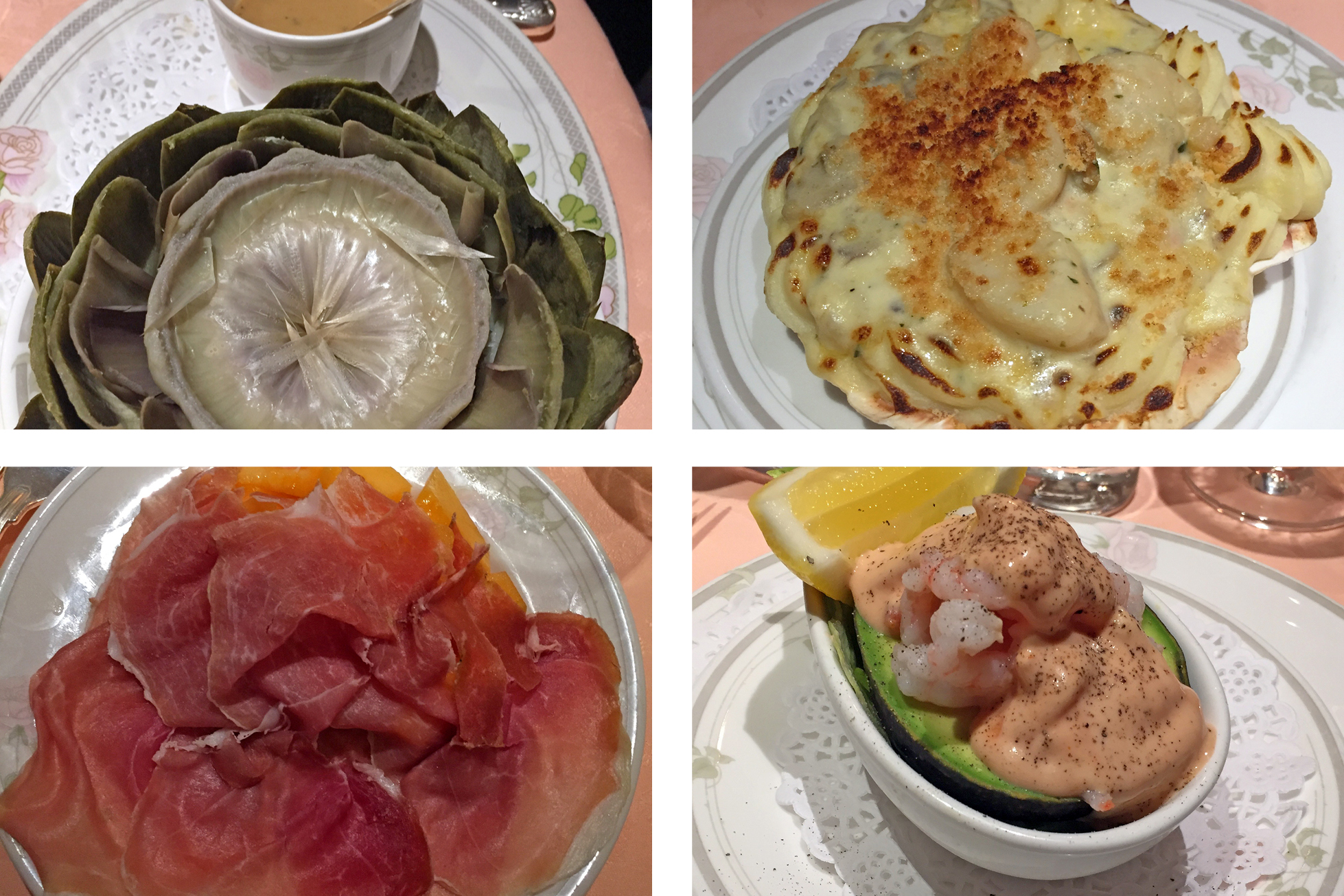 For mains Drew had succulent Lamb Cutlets (French trimmed and charcoal grilled) whilst Ell went for the Beef Wellington special (apparently our dining companions aunt has had the “special” Beef Wellington every visit since 1984). Two huge slices were served, with a quality to rival Bob Bob Ricard; the only difference being that the entire meal at Oslo Court was the same as one Beef Wellington at Bob Bob. Our companions had the Dover Sole (whole, filleted) and the Rack of Lamb. We ordered a selection of Vegetables of the Day for the table and before we had time to wonder where they were, a small conga line of waiters appeared serving from silver tureens and, for a brief moment, it felt like we were in Downton Abbey.

The wine cellar was extensive and reasonably priced. It’s a real cellar. We know this because we watched them lift carpet tiles near the bar, lowering a small ladder in order to collect a wine order. And if wine’s not your thing then there will certainly be a liqueur to suit; we admired the selection of fruit flavours and gaudy colours that decorated the upper shelves of the bar. We haven’t seen Midori since Margaret Thatcher resigned and didn’t even know they still manufactured Crème de Bananes. 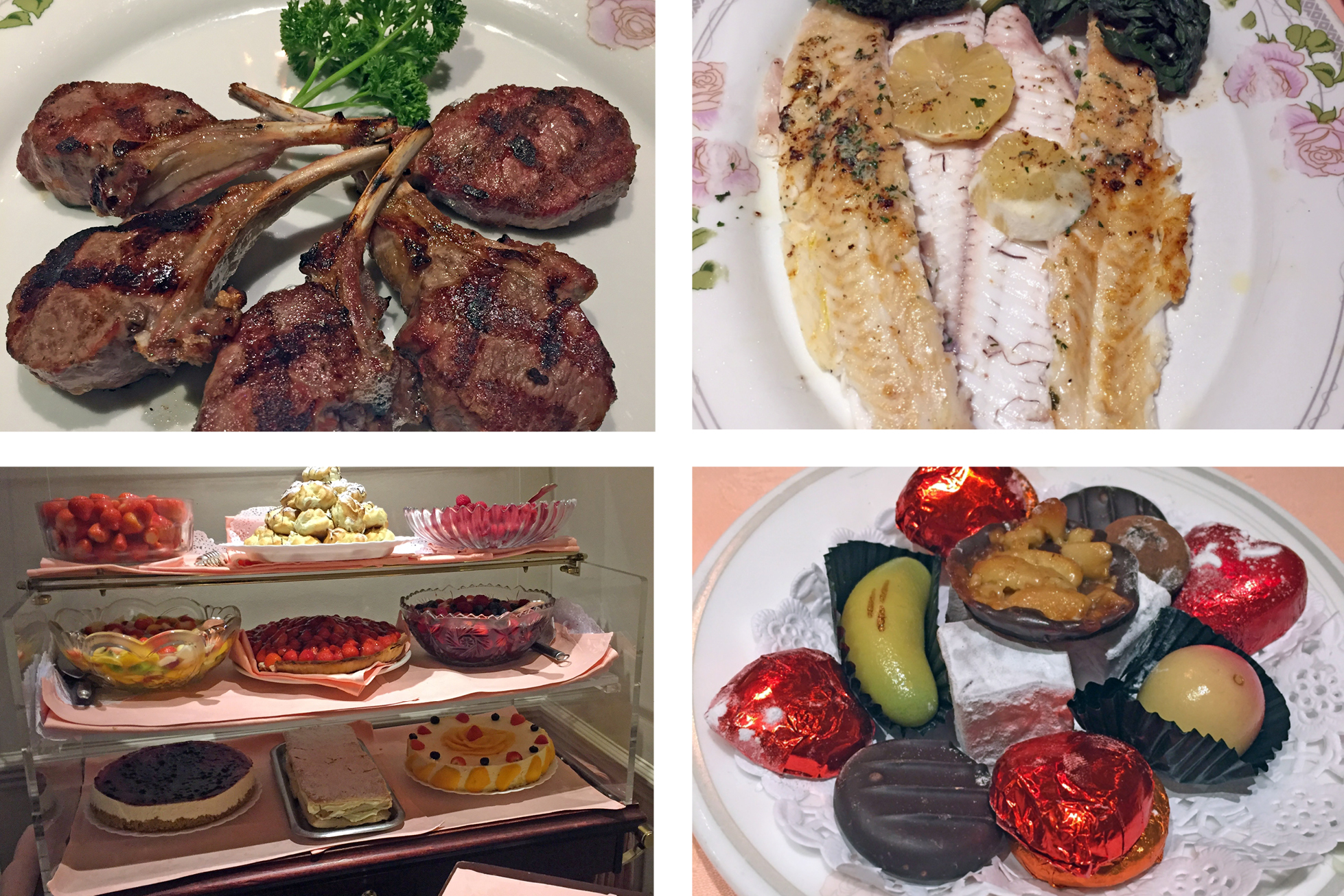 We struggled through our “generously” sized mains whilst many around us moved onto dessert. Periodically the lights in the restaurant would dim and a gaggle of waiters would bring out a candle topped dessert, gather around an unsuspecting birthday celebrant to sing happy birthday; to respect the “certain” age of the clientele no dessert ever has more or less than a single candle.

Dessert at Oslo Court is the piece de resistance; with the infamous Neil wheeling his dessert trolley over for you to select from. Neil, we hear, has been working there for 20+ years. He is the king of dessert trolleys and, as one would expect, more Basil Fawlty than Silver Service. The trolley offered a wide choice of cheesecakes, fruit salads, berry tarts, profiteroles…they even occasionally have a Pavlova, all served with a flourish from Neil. Ell’s request to honour his kiwi allergy was met with much mirth, a wink and a somewhat inappropriately cheeky comment before a slice of berry tart appeared as if by magic. By now we were mostly reduced to fits of giggles with every staff interaction (blame the wine). Coffee came next accompanied with enough petit fours to cater the titanic. Seriously. You’d think we’d be stuffed by now, and we were, but there’s always room for a marzipan cherry, or Turkish Delight or wafer thin mint. It would have been rude not to; after all someone’s job is to put them all out in the correct pattern on those salmon pink plates.

So Elldrew’s overall consensus? Well, apart from the time warp it was certainly an experience; dare we say Oslo Court could have coined the term “destination restaurant”. The food was good; it wasn’t exquisite, it won’t be winning a Michelin star, but it was comfortingly familiar and hearty. Our dining companions tell us the dessert wasn’t quite up to scratch, but we had little to compare against. The staff was excellent; perhaps too fussy at times but attentive and willing. Would we go back? Difficult to say, but maybe not – once was probably enough this decade. We’re quietly confident not much will change in the coming decades and to be honest, nor should it. It’s been a success for proprietor Tony Sanchez and his family for nearly forty years so well done. If you are one of the lucky ones to get a table please bear in mind that pop classic by Duran Duran and go “Hungry Like The Wolf”.