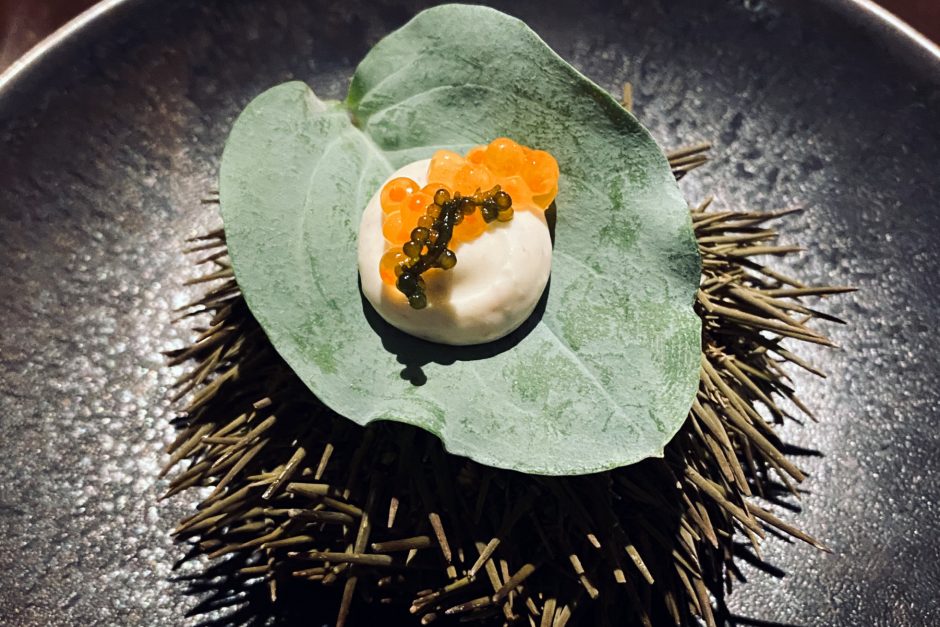 There’s been a lot written about Alan Geaam’s journey to Michelin star acclaim; he learnt cooking by watching his mother whilst growing up in war-torn Lebanon, moved to Paris at the age of 24 with no qualifications or grasp of the French language, taking inspiration from French culinary magazines he read as a teenager, with hard work, conviction and passion, he achieved this prestigious accolade at his restaurant located near the Arc de Triomphe.

Seeking a fine dining experience that wasn’t the traditional French cuisine and white table-clothed formality, we headed to Alan Geaam’s Restaurant for a friend’s wedding anniversary, with high expectations, and we weren’t disappointed.

You have the option of choosing a 3, 5 or 7 course menu, but with little information as to what each menu comprises of – think of it as more of a tasting menu. We went with the 5 courses for €98pp and we must say, we counted closer to 20 individual plates of food, leaving us wondering what else Alan Geaam could offer with the 7 course menu. Each course was a feat of technical brilliance and culinary wizardry combining his unique fusion of French and Lebanese flavours.

The restaurant itself is tiny with few enough covers that Geaam himself delivers each dish with both a flourish and a passion, just to see your reaction. For Elldrew it was wonderful being served by the chef himself as all too often they’re behind the scenes or not in the restaurant at all.

Each dish was well crafted and balanced, with hidden surprises that time and time again delighted the table, we honestly could not fit another morsel of food in by the end of it.

We can’t go into detail without giving too much away but we will say that it was a feast for all the senses, putting Geaam in the company of Tom Sellers (Restaurant Story, UK – read our actual blog here) and Heston Blumenthal (The Fat Duck, UK) to name but a few – all famed for their multi-sensory cooking, food pairing and flavour encapsulation.

Don’t ask us what each plate was, instead feast your eyes on the amazing showmanship that is Alan Geaam Restaurant. Highly recommended.